Adriano De Souza’s World Title Started with $7, and He Deserves All the Glory 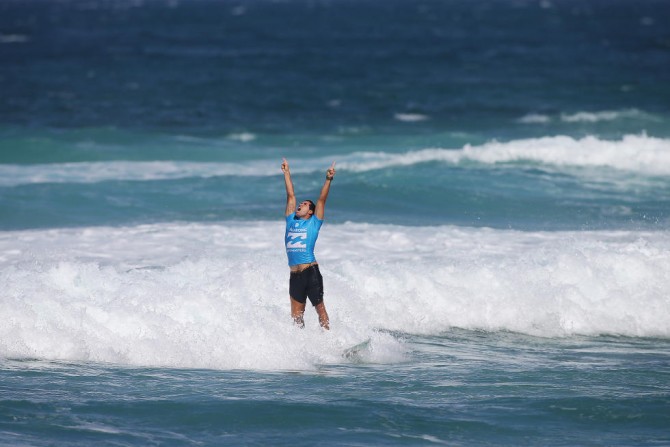 It’s been a long road to this moment for Adriano De Souza. Photo: WSL/Laurent Masurel

Nobody wanted to write about Adriano De Souza today. Mick was the story. It was pre-ordained. The dude was attacked by a Great White shark on live webcast in front of millions of people. His brother died yesterday. He beat Kelly and John John at Pipeline in what many are calling a #SuperHeat in unthinkably classic Pipeline conditions. Global media (think New York Times, CNN, 60 Minutes, etc…) might have bit on a story with that arc. More people on this earth wanted Mick Fanning to win than possibly any other surfer competing for this accolade in the history of the sport. Or at least that would be the most convenient heroic narrative.

And while the world has gravitated towards Mick Fanning in 2015 after he negotiated a relentless and superhuman maze of adversity in the public eye, Adriano has arguably built a far more compelling narrative. But De Souza’s storyline has developed over a significantly longer period of time. And what do they say about attention spans in 2015?

Ask Adriano, because he’s been laser focused on one goal for well over a decade. It all started with a seven dollar gift from his brother when they were kids.

“I have this tattoo in memory of his life,” said De Souza of Ricardo Dos Santos, his friend and fellow surfer who died in January. “He has the same tattoo in the same spot. And they say strength, balance, and love. That’s all I need this year to win the world title.” 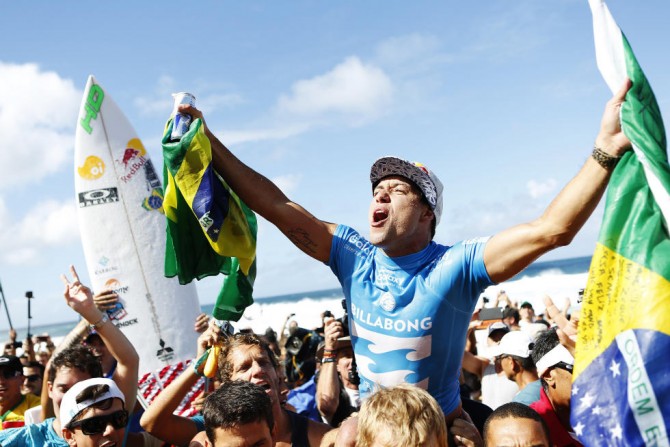 “I had to work for everything I got,” De Souza said in an interview a few years ago. “It made me hungry to do well — hungry to win. ” Photo: WSL/Scholtz

It’s precisely De Souza’s brand of earnest persistence, the kind that surf culture is far too reluctant to celebrate, that makes him the type of champion I’m proud to endorse. As much as we need braggadocio and cartoonishly extraordinary innovation, surfing could use a healthy serving of focus and persistence. Especially considering De Souza built his dreams from impoverished beginnings in Brazil.

“I had to work for everything I got,” De Souza said in an interview a few years ago. “It made me hungry to do well — hungry to win. I wasn’t born to a rich family with everything just given to me. I came from the poor side, which makes me especially value the life I live today. Most people where I grew up were happy regardless of their financial situation and I think that stuck with me. I feel really lucky to have grown up in a place where everyone is so happy. I really love where I come from. I love Brazil.”

I watched De Souza’s victory unfold from the Volcom house where the disinterest was at an all time high the moment Mason Ho folded, which cemented De Souza’s victory. A few onlookers shot disapproving glances at signs on the beach stating the obvious: “Brazilian storm is here to stay.”

Indeed. It is. Which might be a good thing. They might have the perfect blend of persistence, determination, and respect to match competitive surfing’s evolved state in 2015. De Souza, who also became the first Brazilian Pipe Masters Champion, also had the humility and presence of mind to consider the strength and meaning behind Mick’s title run. 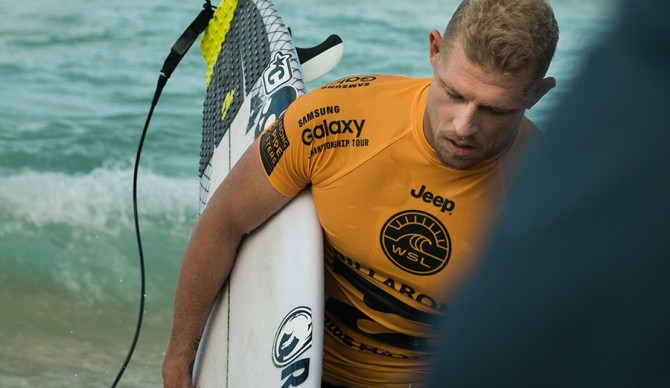 “I thought Mick deserved it more than me,” said De Souza. “He’s such a strong man. He’s a three time world champion.”

Adriano might not have beaten up a Great White Shark or processed the death of his brother while attempting to win a world title this year, but he’s navigated an equally impressive set of challenges that pushed him from a poor town in Brazil into the international spotlight as a champion of the sport he loves, and he deserves every moment of glory and recognition he has coming to him.

And to think, seven dollars started it all. 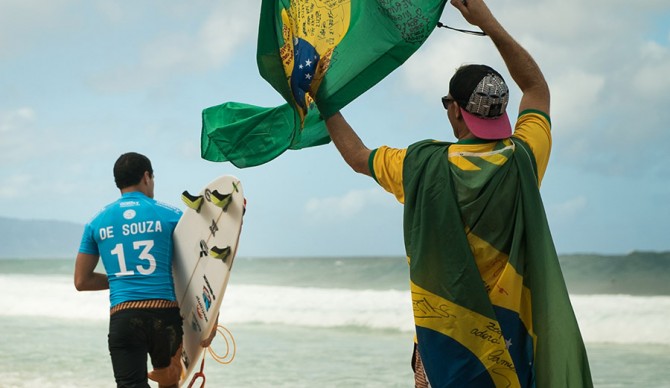 Correction Appended: An earlier version of this article misstated that De Souza was referring to his brother’s tattoo, when, in fact it was Ricardo Dos Santos. It also misstated that Medina defeated Mason Ho; De Souza defeated Ho.