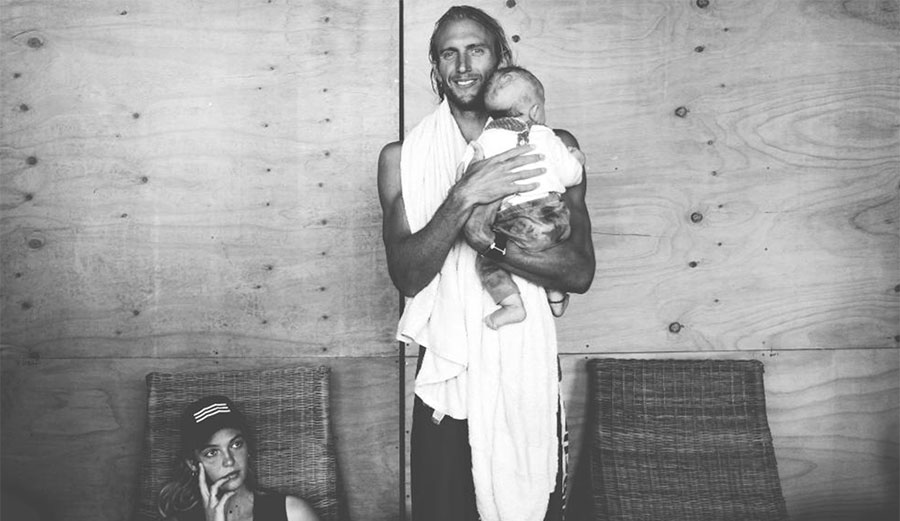 If you didn’t choke up a little during the storybook final heat of the 2017 Quiksilver Pro Gold Coast, ask someone to check your pulse. Two lifelong best friends battling it out in their home country a short drive from where they grew up, Owen Wright’s transcendent recovery from a traumatic brain injury, siblings Tyler and Mikey frothing with support, the picture-perfect young family that is Owen, Kita, and Vali — it was a moving fairy tale beyond imagination unfolding in real time before our eyes.

After the victor was chaired to the beach, after the post-heat interviews and the awards show and the conclusion of the WSL’s telecast, the towering gentleman known as Owentar opened up about his recovery, becoming a father, and his first final against Wilko when they were ten years old. 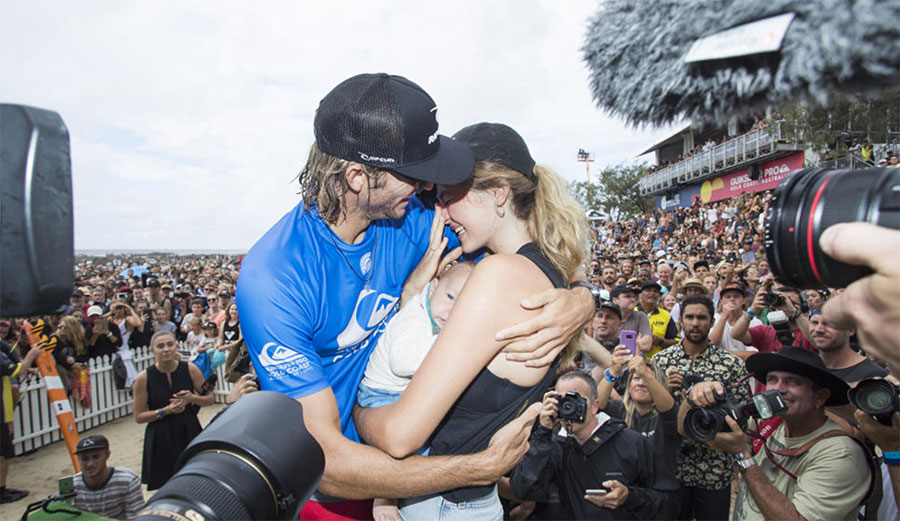 There is nothing more important in the world. Photo: WSL

On his newfound “Dad Power”:
Having a partner and a little son is the greatest joy in the world, and it really pulled me through a time that was a little bit wishy-washy. It’s amazing being a dad and there’s definitely a Dad Power that you get when you first become one.

It’s a funny experience, coming in from a heat and holding a baby. Before I had that, I’d come in from a heat and be like ‘Oh, did you notice me, that wave this and that.’ Now I just sit there and play with him and it’s the best thing in the world. 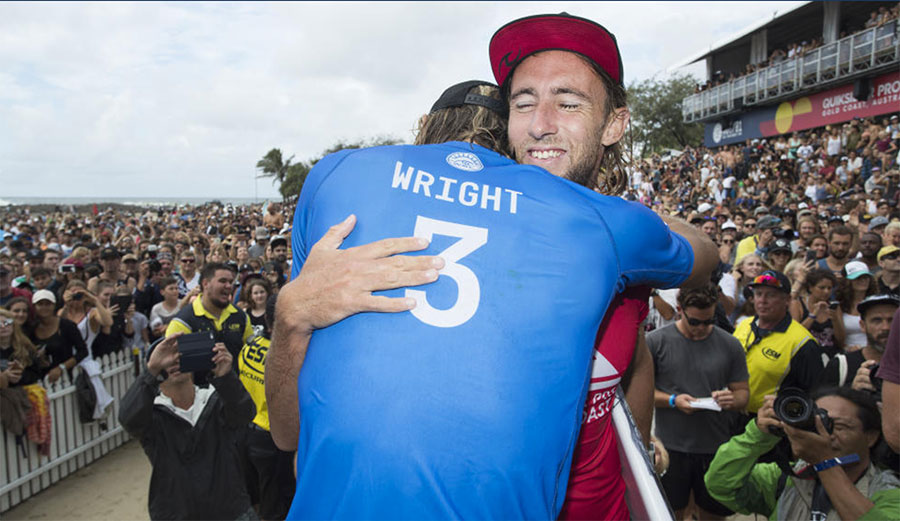 Wright and Wilkinson have been good friends for years. Photo: WSL

On competing against good friend Matt Wilkinson:
It helped me having such a familiar and loving kind of support. My first final with Wilko was when I was 10 years old, that’s how long we’ve known each other. It was an Avoca Pines Challenge seventeen years ago. I’m not sure [who won], but I know I caught ten waves. It was a 20-minute heat and I caught ten waves in 15 minutes, and I had to come in and stay on the beach and watch and I was just a wreck. That was the first time I met Wilko and that was the first time we had a final together.

On his road to recovery:
It’s bizarre how life works. I’ve been really lucky that I was blessed with good news, good doctors and good people that allowed me to be here.

With head injuries, a lot of your coordination struggles. I went through all those struggles, and basically, it all came together. [My support network] kept saying to me the whole time, “You will make it back. You will have that back.” It took 12 months, but we were sure the whole time. We all got through this.

There was a time about three weeks before Vali arrived when it kicked in and I was like, “whoa, feeling good,” and I was starting to get back into things. From there it’s just been a really steady rise back to where I am now.

It’s a bit of a cliche, but what doesn’t kill you definitely does make you stronger. I feel a lot stronger emotionally from those things. Everything I see right now is just such a blessing — it’s hard for me to find bad things after what I’ve already been through. 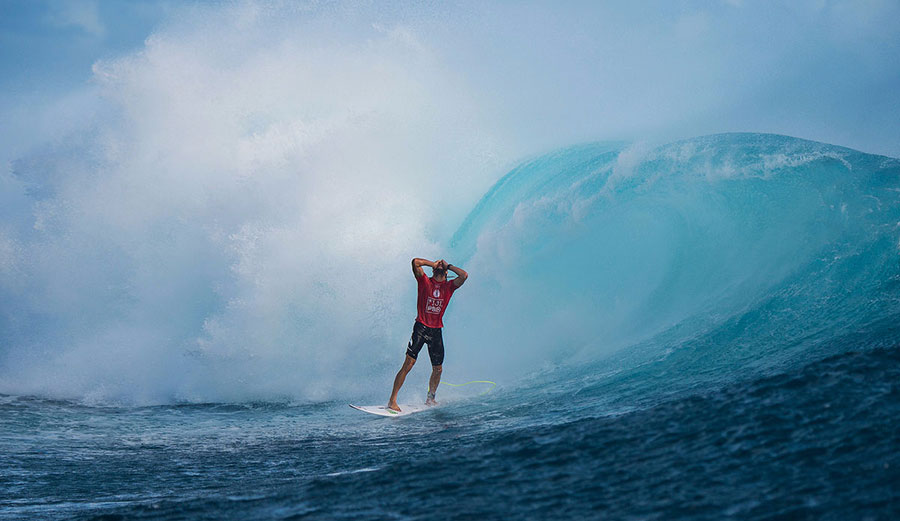 Owen Wright moments after the wave that gave him a perfect heat in Fiji. Photo: WSL

On stops he’s most stoked for:
It is Fiji, for sure. I can’t wait to get back there. Fiji, Chopes, a little nervous about Pipe, but Fiji and Chopes–I just can’t wait for those two. 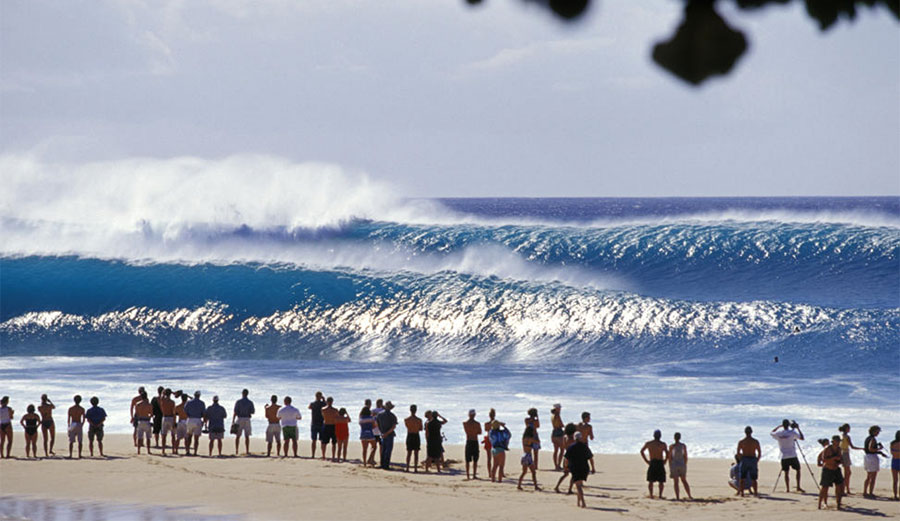 “As far as my health goes, I’m sure I’m 100% okay and there’s no physical danger. It’s just a mental challenge.” Photo: WSL

On surfing heavy reef breaks again:
That’s something I haven’t gone through yet, and it is a bit daunting but it’s just another barrier that I’ve got to push through. Just competing at this event was a barrier that I had to push through and…returning to some solid waves is definitely one of them. I wanted to go through it before this event and start the year with that ticked off, but it didn’t happen because there’s no swells around, so I’m just going to go to West Oz earlier and try to get in some big waves. Hopefully, Margie’s will be 8 to 10 foot like it always is and I’ll get some waves to at least break through that barrier before it comes to putting on a jersey and paddling out. But as far as my health goes I’m sure I’m 100% okay and there’s no physical danger. It’s just a mental challenge.