In Conversation With A.J. Dungo, Author of the Deeply Moving Graphic Novel ‘In Waves’

On a brisk August morning in King’s Canyon National Park, I sat at camp nestled in a clearing among ponderosa pines deeply immersed in some late summer reading – a graphic novel and debut effort from author and illustrator A.J. Dungo, called In Waves, that is ostensibly about surfing. For several hours, I sat with coffee in hand shooing away others in my party and declining offers to “go explore” until I reached the end. And after reaching the final page, a feeling came over me that I can only describe as being totally shook.

As I say, on paper In Waves is a story that weaves together chapters on the origins of surfing with the personal experiences of its author around the sport. In truth, it’s about so much more.

Early on we discover that the main character’s partner, Kristen, is diagnosed with terminal cancer and that during her steady decline, surfing is a vehicle to make light of the diagnosis and for the main character to bond with her brother. We see A.J. and Kristen’s tragic love story evolve in a non-linear way depicted in blue monochrome, and like first breaths after a two-wave hold-down, we come up for air to the history of surfing’s pioneers, especially Tom Blake, bathed in a sepia-inspired orange.

The book is deeply moving and visually stunning, and after reading I reached out to Dungo to tell me more about the story, his inspiration, and surfing as a vehicle for coping with grief. 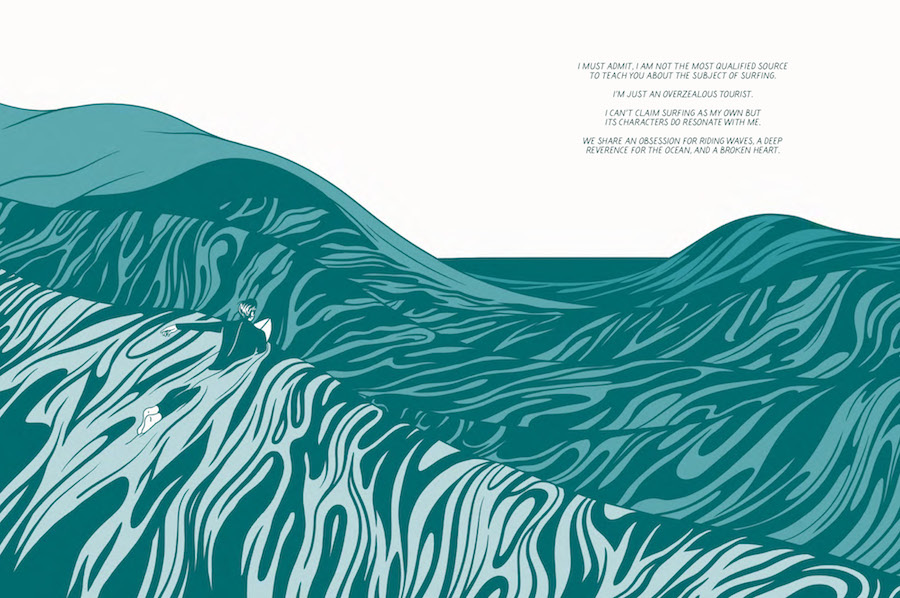 So this story is autobiographical. That has to be deeply personal to share this story with the world.

Yeah, obviously the surf history stuff is all research, but the personal stuff was all autobiographical. I’ve always wanted to make comics and do graphic novels, but this all kind of happened by chance. I went on a study abroad trip during my last year of school and that’s when Kristen passed away.

On the trip, we went to London and it was basically a dry run for your creative career. You had teachers chaperoning you to different ad agencies and publishers and designers and we were shopping around this project that we worked on and mine was about Tom Blake. I made a box of ephemera from his life.

The publisher that saw this book and was moved enough to ask me to make a book with them and their first request was for me to make a book about surfing for them. Eventually, they said they were less interested in a straightforward book on surf history and wanted something more personal. When I told them what happened to me and how I had gotten into surfing, they were immediately more compelled and asked me to make a story like that. So it was their prompt to combine the two parallel narratives and weave them together. 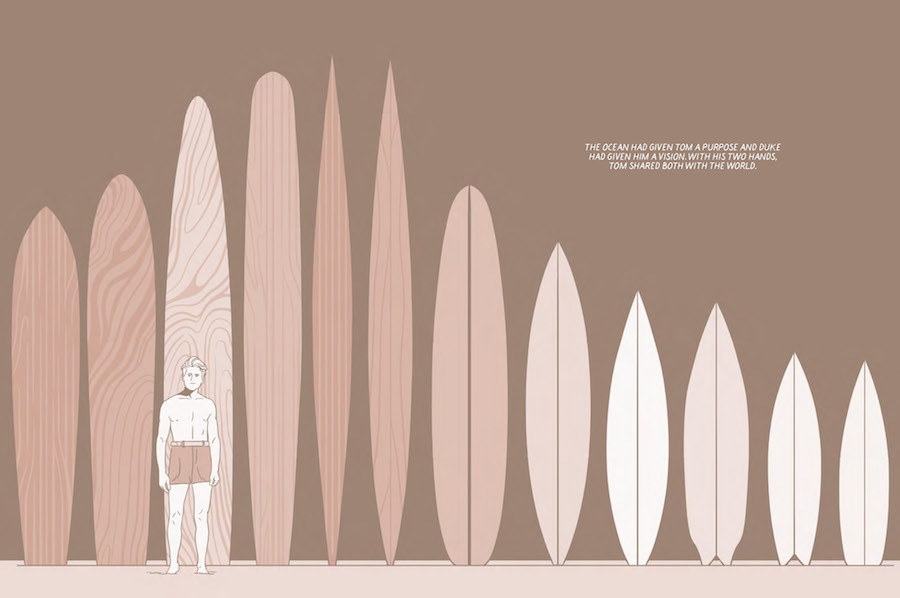 In the book, you detail doing that initial project on Tom Blake. What was your attraction to his story over other surf pioneers? Did you feel like there were elements of his story you could relate to personally?

One hundred percent. Actually a few teachers of mine who knew I was getting into surfing suggested I look at his story. As someone who got into surfing super late and isn’t the typical ethnicity of someone who surfs I always felt like an outsider. So, to read that one of the early pioneers of the sport was an outsider as well – who didn’t come from Hawaii, and didn’t come from the coast. Just someone who fell in love with the sport, that really resonated with me. And his nomadic lifestyle, too. He was kind of a loner and I felt that way once Kristen passed away. He accomplished a lot in his life and it’s something that I aspire to do, too.

Focusing on the title of the book, In Waves, what is the significance of that idea to you and what do you hope the reader gets from it?

It’s not too layered. The title implies a double meaning: literally in the book you’re submerged in the waves that I’m drawing and you’re experiencing what it’s like to be a surfer. But, it’s more about the grief aspect in my mind. It just so happened that it worked in both ways.

In dealing with grief everybody has a different take on it, but for me, it was something I couldn’t really put my finger on. It would be overwhelming at times. Other times it would be underwhelming or non-present. So, I think the title really encapsulates that feeling.

What I’ve learned is you can’t go through life alone and that we need each other.

In another interview, someone mentioned that the title also implies the story is being told in waves where you’re getting highs and lows of my relationship and then you’re getting breaks when you’re reading about surf history. So, it ebbs and flows between two different narratives. And I thought that was well put.

Talking more about the visuals of the book, can you tell me about the inspiration behind the color palettes that distinguish the two narratives – where turquoise/blue denotes the personal story and the sepia chapters are the ones that walk the reader through moments in surf history?

Yeah, each color delineates where the reader is. It’s an easy touchstone for someone to know where they are in the story. But, the colors themselves, the sepia orange was inspired by old framed photographs. It’s a color that’s synonymous with old cinema or old newsreels. Things that we connect with nostalgia and old film.

And the blue was because of how I was feeling. It’s kind of a corny answer but I was feeling quite blue during the whole endeavor of writing the book. But the two colors are complementary as well. 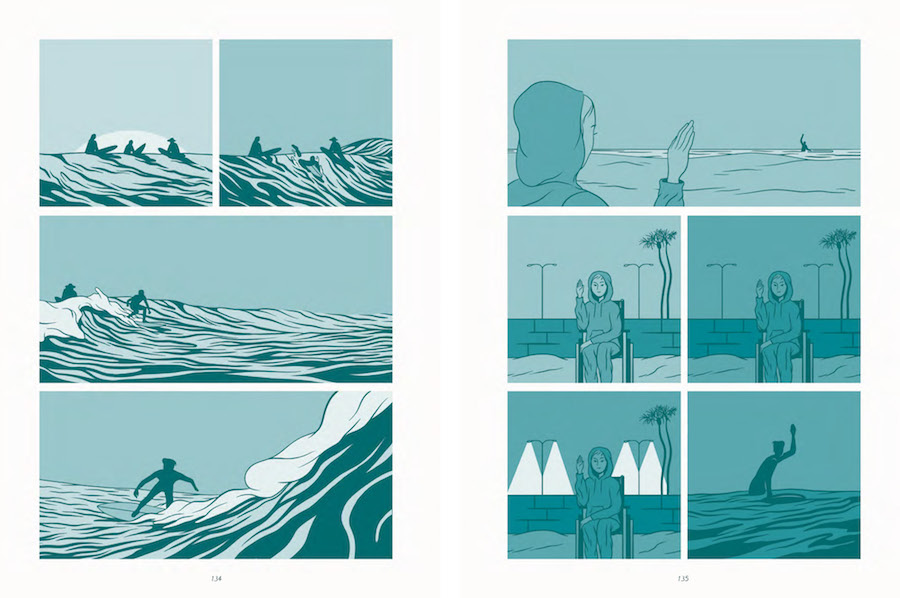 What I love about the book is that surfing is an entry-point to talking openly about grief. It’s not a cure-all necessarily, but a vehicle to ease trauma and also to honor the legacy of your late girlfriend.

Thanks, man. Yeah, it’s whatever you’re into. Whether it’s art or movies, skateboarding or anything it’s kind of a distraction. Not even the act itself but everything around it. I mean there are obvious health benefits to surfing, skateboarding, or any other sport. But, in the periphery of the activity, there can also be healing. It’s the community you’re building or the friendships that you’re making with other people. What I’ve learned is you can’t go through life alone and that we need each other. That’s one thing in this book that’s glaringly important is the relationships we make and how they can affect us and change us. For some people, surfing can be an end all be all thing where they just enter the ocean and it cures them. But, for a lot of others, it’s everything around it. You could be talking to a friend and they just relate to you on that level. Not that it’s not important, but it becomes a backdrop for something where real healing can happen.