All-Time: ‘How I Captured This Freeze Frame of a Frozen A-Frame’ 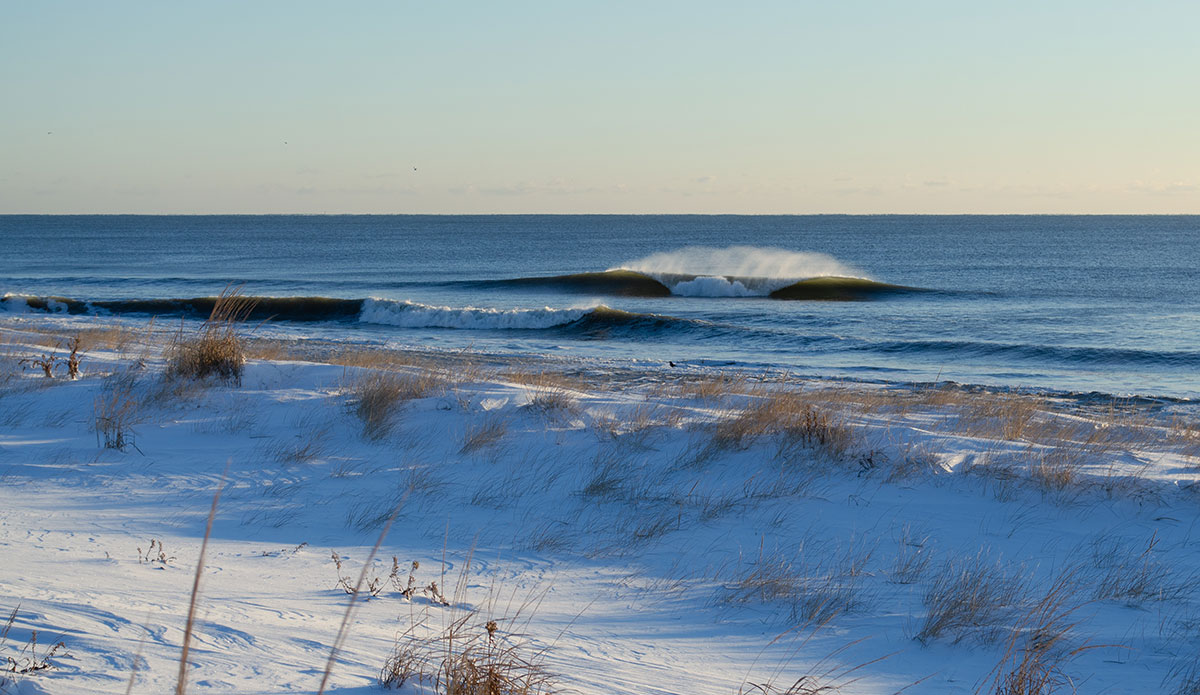 If you know me, there are two things I have an unhealthy obsession with: snow and waves. I have a steadfast rule when it comes to snowboarding powder: I’ll drive one hour for every two inches it snows. Being from Phoenixville, Pennsylvania, it works. The Poconos are getting two to four inches? It’s worth going up. Northern Vermont is getting dumped on? I’m definitely trying to make the trip. But for surfing, I haven’t really figured out the ratio of swell reading to travel time; however, on paper this swell was certainly on the cusp of that measure.

A fading 2.5ft at 11-second swell (ENE) can be hit or miss in New Jersey, and generally doesn’t make for conditions you would think suitable for an all-time photo. Until you consider that this swell came from the first blizzard to hit the state since 2018, and over 20 inches of snow fell along select beaches.

A broad and quickly deepening low off the East Coast is generally a good look for swell production, but this storm was a less-favorable Miller ‘B’-type Nor’easter. Born from a trough in the Ohio Valley that transferred its energy off the coast, it strengthened too late and formed too far north to generate large Mid-Atlantic surf. By the time the storm was at full strength and actively dumping snow on the beaches of Jersey, the largest fetch of wind was blowing from the north off the coast of Long Island, NY, a setup that does not yield great results here in the Mid-Atlantic.

To add a further blow to local surfers’ stoke, following the storm the wind went offshore just before dark. It blew hard all night, something that can blow any remaining swell in the water flat by morning. The risk of a bust was real, but with mid-period swell still reading on the buoys at 3 a.m. and an incoming tide that aligned well with sunrise, I figured there was a good shot of clean, waist-high waves to go along with the waist-deep snow drifts I had seen reports of.

It was one of those days that you could picture the exact shot you wanted in your mind before arriving, and I knew that if the waves looked as I suspected they would, the resulting shot could be all-time. I made the call last minute and got to the shore for first light. It was a cold, windy, and clear morning. Long Beach Island looked more akin to a ski town than a beach town.

I narrowed down a section of beach that would best pickup the prevailing ENE swell angle, and trudged through the snow to get to the top of the dunes. The snow was dry; the weightless kind that makes for great skiing. With blizzard conditions the day before, it had blown into epic drifts, with ridges and ripples looking straight out of the Sahara. When I came over the ridge, the waves were better than expected. That was it. All the elements were there.

In the foreground, golden dune grass contrasted against the textured snow, while the background offered clean swell lines with backlit spray cascading in the wind behind each breaking wave. As such, this was a prolific morning of photography. You could train a monkey to take a sick pic in these conditions. All I had to do was wait for clean waves and keep my hands warm.

There were two pictures I wanted. The first was a beach path full of snow leading to a perfect peeling wave, and the second was a picture with an unobstructed view of the frozen dunes in the foreground. When I got there it was still too dark, so I struggled down the untouched waist-deep walkway to my right, all the way down to the sandy high tide line, and promptly took a piss. When I walked back up, I carefully followed my steps to the top of the path, knowing that the resulting shots would come out great with a single set of footprints through the snow.

The “Freeze Frame of a Frozen A-frame” certainly stands out as a favorite from the day. I noticed the sandbar down the beach to my left was shallow and I had seen one or two really good waves break down there, so I began to focus my attention on that spot, away from the shot I was trying to get with my footsteps.

For this shot, I got a bit lucky and pulled the shutter at the perfect time, as the wind blew the barrel into itself in the following frame, and there weren’t many A-frames coming through to take advantage of. Most waves ran as lefts along the bars, but the odd residual set with east or south angle would meet the more consistent northerly sets, resulting in waist-high A-frames.

All that said, I’ve never considered myself a surf photographer until this day. This was actually my first time traveling solely to shoot waves. I’m really glad I made the call. If there’s one thing I’ve learned in life, it’s that you don’t know what the future holds, so take advantage of what you can, when you can, and pull that trigger. A lot of times you end up scoring, and even when you don’t, it’s always worth it for the experience alone.