All-Time: How a 1-On-1 Photo Op With Kelly Slater Topped a Lifetime of Shooting at Teahupo’o 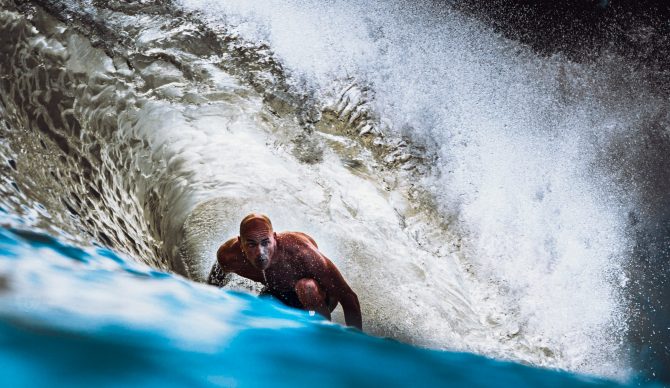 We usually have no idea what stories to expect when asking photographers to share their favorite moments, memories, and images for an All-Time feature. But considering Tahiti’s Romuald Pliquet has been dishing images of Teahupo’o our way for years, it felt like a safe bet he might’ve picked something from a day that lives in surfing lore: August 27, 2011. Code Red.

Close, but no cigar.

Pliquet admits one image that day is the first that comes to mind when asked about all-time moments through all his years of surf photography. Nathan Fletcher’s ride, to be exact. In fact, he has a poetic sense of the details of that ride and the image he captured from it. But with so many bodies and lenses in the water that day, even Fletcher’s historic ride can’t hold up to the sentimental value of Pliquet’s actual favorite moment as a surf photographer.

“It does not belong to me completely,” he admits. “Several friends and fellow photographers were also present that day and several of us have the same shot.”

Instead, Romuald’s favorite shot came 4,000 miles away from the end of the road, in the middle of California cow country, at the Surf Ranch. He’d visited the Ranch when the WSL made its first Tour stop there and in 2019 was still curious enough about the place to make a return trip.

“The Surf Ranch is far from what we truly love about surfing but it’s still clear that this wave is very unique,” he said. “Photographing the pros during their free sessions, the pleasure and joy can be read on their faces as proof. There’s a notion that everybody’s enjoying a moment of privilege here, like being left alone to surf your home break at sunset.”

Ironically, that’s exactly what he got on his return trip when he found himself alone in the pool and face to face with Kelly himself.

“I had already been in the pool for a few hours when I heard the train lift the wave again,” he said. “I recognized the inimitable style of the King despite the narrow eyepiece of my water housing. It was then that I understood very quickly that I was alone with the boss and he was approaching me at full speed. The feeling was incredible.”

Navigating excitement and nerves, wanting to get the best close-up possible without being so close he’d blow the wave for Slater, Pliquet figured he had one chance to get the shot of a lifetime.

“I am (from) the generation who started surfing with the magic of Tom Curren,” Romuald explains, “and then I grew up with Kelly. He is and will remain my absolute idol. To find myself alone in the water with the Goat, lost in the middle of the Californian desert with his eyes riveted on the exit, is a reward after all the years spent photographing.”