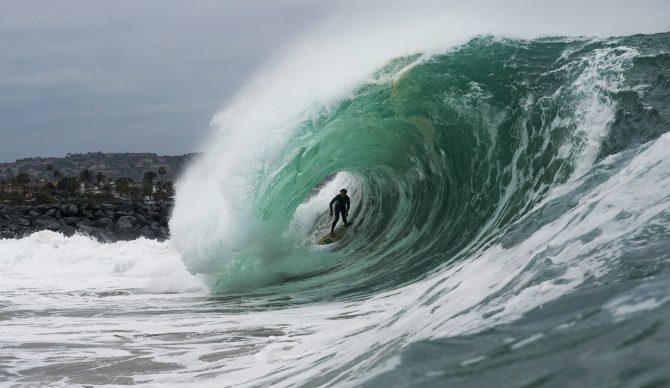 Tommy Cantrell center stage in the photo of the swell. Photo: James Ferrell

In the big leagues of surfing’s most photographed waves, Newport Beach’s Wedge ranks high. Give Orange County just a sniff of a South Swell each spring and you’re guaranteed the crowd on the beach will outnumber the crowd in the water next to the jetty, fully equipped with news vans parked in every nook of the peninsula and lenses of every kind pointed toward the horizon.

All the hype could make one believe they’d seen every angle there is to see of the wave. We recognize it by shape, landmarks, we know where each photographer lines up on the beach or swimming around in the shorebreak in almost every image. But it never gets old.

Still, when James Ferrell shared a shot of Tommy Cantrell standing tall inside a barrel with room to spare we quickly got a sense he’d captured something unique. Whitewash from the sidewave, a barrel so open you can see through to the other side of it, a lip throwing as far out to shore as the wave is tall, and Cantrell front and center – from what feels like a mile behind the peak.

“It definitely has to be big in order for that type of wave to come in,” Ferrell remembers. “You usually can’t see all the way through. I’ve only seen a couple of waves like that and that was the only one I’ve seen someone pull into. It’s definitely a really unique angle.”

With it being the first notable south swell of the season, Ferrell had shown up at the Wedge by 6 a.m. planning to shoot. In fact, he was early enough that by the time he’d checked the waves, taken note of who was surfing, and suited up, he was still the first person with a camera to swim out into the lineup. While putting his fins on he noticed a few lines by the jetty and realized it was time to hurry into the water.

“I’m glad I did, because right when I got out a big one came in. Nobody was on it, then right after that the second wave I saw was just the craziest wave I think I’ve ever seen at Wedge.”

The second wave was Cantrell’s. He knew it was a special moment when it all happened, but it wasn’t until he sat down to go through the sequences from the session that it sank in.

“Usually people kick out when it’s already breaking,” he says, “but he just decided to backdoor it. He didn’t make it but he packed it.”