All-Time: Camping Out to Catch a Scene Out of a Movie 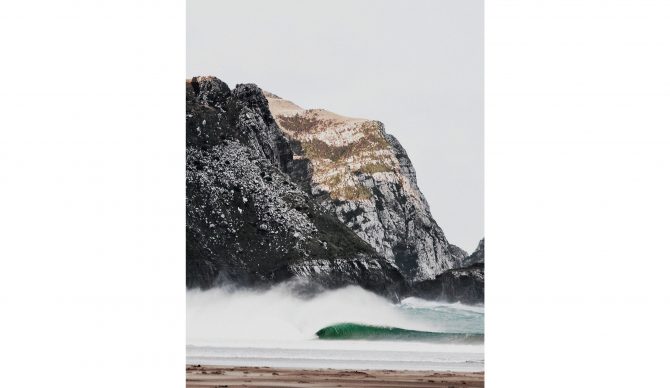 Coldwater surfing definitely carries its own charm. Images of glassy barrels breaking in front of a tropical backdrop are universal in their draw — anybody would instantly daydream themselves onto that beach and away from a desk, surfer or not. But present a gem of a wave near anything that makes you even think of the word cold and surely only a surfer would call it inviting.

Ben Gulliver’s 2017 The Seawolf, filmed in Norway, Scotland, New Zealand, Canada, Australia and The Faroe Islands, celebrated that same draw some have to cold-water waves. For Valentin Rey, a photographer based in Switzerland, it meant an overnight adventure to shoot one of the film’s locations, which turned into a “you couldn’t have scripted it better” moment.

“South swells hit hundred-meter cliffs with full force,” Rey told us, setting the scene for a reeling offshore left with the kind of backdrop that absolutely belongs in a movie. “Waves are refracted toward the perfectly groomed sandbanks and lifted up by the strong offshores. This is a place of magic. It is cold but the native bush behind the beach offers a tropical feeling. ‘Sweet as,’ as the locals would say.”

Rey had arrived with a swell building and nothing to do but wait for the chance to catch the wave at its best. So he drove, scouted, and eventually settled on a hunch and a place where he believed the conditions would best show themselves.

“The first glimpse was mind-blowing,” he said. “The first waves of the swell were already breaking. The size was difficult to judge but knowing the cliffs are a hundred meters tall, it gave a good sense of the power that we were witnessing.”

With the swell still building, the sun gone, and probably too restless to sleep, it was decided Gulliver’s film should be watched for inspiration. Peter Devries and Noah Cohen had surfed the same spot, so it only seemed fitting. “The most epic scene of this epic movie,” Rey says.

“(The) next morning, 7 a.m., under biblical rains and at the peak of the swell, two white Toyota Hilluxes arrived. A pro photographer, pro surfers, and a cameraman came out of the vehicle. Guess who they were!”

“Yes, Pete Devries and Noah Cohen. What were the odds?”