Am I an Asshole (and Legally Liable) For Surfing Leashless? 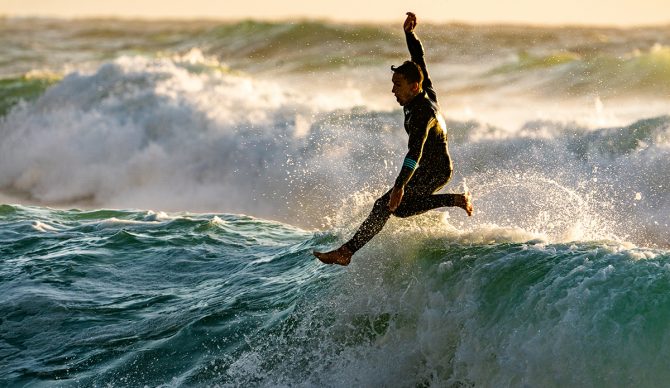 “Dammit, Juan. You’re gonna kill me one of these days, aren’t you?”

It was one of those half-jokes with just the right hint of sincerity to make me feel guilty. But I’d only brought one board with me — a beater of a single fin that’s not long enough to be a log but passes for one on sloppy, small days. I tucked it under my arm and passed off a disingenuous laugh as an apology.

I didn’t kill Alex that day. He’s still alive. Even so, with the actual context of what’s at risk I’m probably not nearly a good enough surfer to justify surfing without a leash as often as I do. We were the only two people in the water that day and few people would bat an eye at going leashless in a lineup of two, but brushing off what could have been a gruesome, worst case scenario begs the question: Am I an asshole for not wearing a leash?

They’re kinda like the anti-Vaxers of the ocean realm. #singlefin #surfing #noleash

The answer: It’s one of surfing’s many gray areas. Most of us are guilty of a leashless log day or a leashless spin on a retro twin once in a while. Further, it’s an unwritten law that logs must remain leashless. That’s the norm here. There’s a time and a place for it, right? Maybe not.

“What I’m going through is brutal,” says San Diego’s Tom Matthews, a recent Western Surfing Association Over-50 shortboard champ and throwback NSSA National Team competitor. “Sleeping in one position for a month now. You can’t do anything with a broken rib. You can’t cough, sneeze, laugh.”

Tom’s now four weeks into what he estimates will be six months out of the water, thanks to an errant, leashless board that was lost by an accomplished logger on a crowded day at a San Diego beachbreak. It’s a risk we generally accept by entering the water, for the most part, because people usually don’t land in a hospital bed as a consequence of a runaway board. But that’s exactly what happened.

After the collision, Matthews says the other surfer followed him for a moment to make sure he was ok — which he immediately admitted he wasn’t — before disappearing back into the lineup. Meanwhile, he was rushed off to the hospital where he spent four days with a collapsed lung and two broken ribs. Eventually, he was able to track down the person who owned that board. According to him, when he reached out, he was met with, in so many words, “I’m sorry you got hurt, but lots of people do. I’ve been hurt myself.”

We all assume some kind of risk when we get in the water with other surfers, but Matthews’ story doesn’t just stoke the asshole debate, it begs a question with actual consequences. On a crowded day at Oceanside Harbor, regardless of how great of a surfer you are, the answer is probably an easy, “Yes, you’re kind of an asshole for not surfing with a leash.” But in a legal sense, does being that asshole make you liable for somebody else’s potentially life-changing injury?

“Participants involved in recreational activities generally owe a duty of reasonable care to other participants,” Paul Capara wrote in a 2008 report titled Tort Liability in the Unregulated Sport of Surfing. “When an individual violates this duty of care and injury results, there is the possibility for tort liability. Courts examine sports-related negligence claims on a case-by-case basis. However, many claims have been successfully defended on ‘the traditional belief that a participant assumes the dangers inherent in the sport and is therefore precluded from recovery for an injury caused by another participant.’ Recent court decisions have examined this traditional defense and determined that not all participants assume the risk of injury in their respective sport when the injury is a result of gross recklessness or intentional conduct by the other participant.”

In other words, even the law doesn’t have a straight answer. Funny enough, I decided to search the internet not just for a personal injury attorney, but a personal injury attorney who surfs — the kind of person I assumed would have an understanding of why going leashless is an unspoken but objectively odd norm in our sport. A few pages into Google search results brought me to a Santa Cruz father-son firm, both of whom surf (the son is displayed on the website comfortably tucked under the lip of a barrel somewhere in the Ments).

“It’s not something I would officially take,” says Tyson Wiles over the phone regarding my hypothetical lawsuit, pointing out that he can’t really think of any precedence or legal definition of what would be considered negligent in a leashless board accident. To him, there’s never a clear-cut case on either side of the argument — the one that says your board, your fault, and the other that argues we all know the risk when we get in the water. It’s more or less a coin flip. Tyson and I laugh about the irony that he surfs without a leash about as often as he surfs with one, and I admit how little thought I put into making that choice myself sometimes. The more hypothetical broken noses, head injuries, and stitches we dream up at the hands of errant surfboards, the closer we don’t get to an answer. The conversation actually makes me realize that the surf community usually does a pretty good job of policing itself. Kudos to us, I guess.

“There are lots of inherent risks in surfing,” Tom Matthews adds. “I’ve found a lot of skiing incidents, and the courts tend to lean toward an assumption of risk [when we’re on snow, same as in surf]. I believe there’s totally a time and place to not wear a leash. But your standard beach break, as crowded as it can get, is a recipe for disaster.”

Stories like Tom Matthews’ are the exception to the rule, and most of us make it back to the beach every day in one piece, dodging errant surfboards in crowded lineups along the way. Maybe it’s just up to us to decide how big of an asshole we’re willing to be, because wanting the freedom to walk the nose unimpeded at First Point Malibu is an entirely different, and somehow more socially acceptable choice than doing so on a head high Saturday morning at a crowded beach break. And just because a court might not say you’re responsible for somebody’s hospital bills doesn’t mean you aren’t being an asshole.