Amputation by Choice: How Nathan Smids Refused to Let a Life-Changing Accident Change His Life 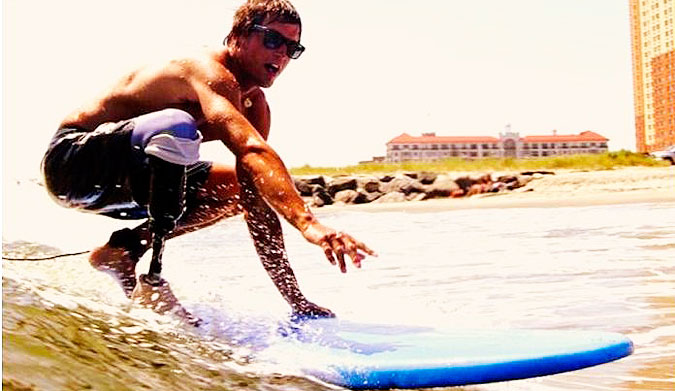 After a snowboarding accident and subsequent infection that took his leg, Nathan refused to let his amputation rule his life.

Lean, mean, and ready to kick ass. That’s one mark of a surf adventurer, and Nathan Smids has a go-for-it attitude to moving on with life, having fun, and giving back.

Nathan lost his leg, by choice, ten years ago. After a snowboarding accident that broke his right leg and an infection that turned a large section of bone to mush, he chose the amputation option rather than take a chance on multiple bone breaking surgeries to get a chance at a replacing the mush with new bone.

Nathan seriously thinks it was the best thing that happened to him. When he decided to move on in life and to travel, the world opened up for him.

Kayaking seemed like a safe way to get sporty and active again, and Nathan taught adventure kayaking for three years internationally on different continents. He actually could have done all this without ordering the doctors to chop his leg off… that is, if he hadn’t had a snowboard accident.

Nathan did what any able-bodied human (Nathan’s term for non-amputees) could have done. He got out there, explored, trained, dreamed and acted–and walked through the doors that opened, putting both feet forward with confidence.

And then Nathan discovered surfing. After putting together parts from various spare feet and designing a leg/foot two inches short so that it could pull under him without catching a rail as he jumped to his feet, Nathan adventured into surfing with poise and drive five years ago. Nathan competes along the Californian Coast in the longboard division against surfers who do have both feet of flesh, and sometimes he makes them look as if they have feet of clay.

There are amputees who have had it much worse and there are “able-bodied” who have faltered. Nathan works in the rehabilitation field now and his message, through his life and words, is that the game is not over when people assume it is.

The second part of his message is that a surfboard is a great vehicle for expression, achievement and satisfaction when you couple it with waves, and the courage to take off.