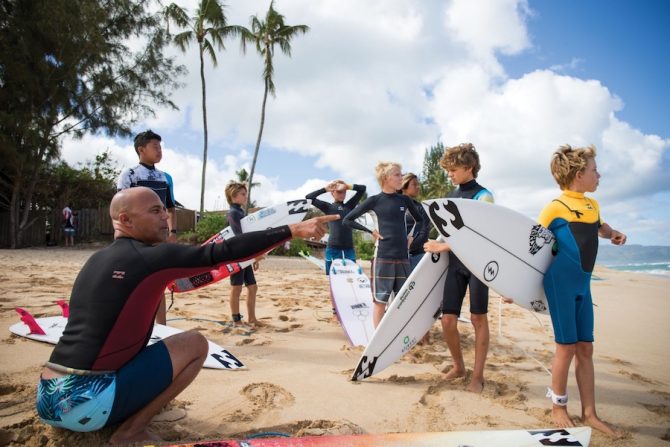 After a barrage of texts (on my end), at least three calls cut short, and a phone battery about to die, Billabong’s Hawaii Team Manager and Coach Rainos Hayes is still gracious enough to find a second in his busy day to recap the past two and a half weeks, the majority of which have been similar to this one. Hayes has been spending sun-up to sundown with the newest crop of superstar groms, heavily investing in the future through Billabong’s annual Bloodlines Camp. Nearing a decade-long run, the training is a surf-bootcamp of sorts, aimed at acclimating the next generation of pros to their newest reality of heats, health, hard work, and, of course, surf. In short, giving young, up-and-coming pros and inside edge to navigating the proving grounds.

“The whole idea behind it is to try and form relationships with the Triple Crown breaks,” explains Hayes. The Billabong Bloodlines Camp is broken into two parts: nine days of older kids, (the 14+ crew), and the remaining nine days with the 13 and under grommets. They sleep, eat, surf, and train together. When the surf is on, they’re in the water perfecting maneuvers, running mock heats, and learning to read the waves of this prestigious coastline. Laydays aren’t wasted either with team-building hikes, yoga stretch sessions, and competitive games. It is a full-on sun-up to sun-down intensive team training experience.

Though this year’s weather was less than ideal, with a forecast of near non-stop heavy rains, the older guys had luck on their side, scoring a few days of prime water time: “Those guys got really good conditions; It was definitely challenging for them at the ability that they are. These guys are pretty elite-quality 15-year-olds. As far as on a world-wide scale, you know, they can handle some size and are definitely looking for more risky situations.” The waves delivered as surfers like Joao Mendoca, Jackson Dorian, Kai Martin, and Fletcher Kelleher were spotted tearing up the North Shore’s favored zones including the Billabong House’s front yard – Off the Wall.

But the luck ran out during the second week when the island was yet again bashed with relentless rain and howling winds churning the seas. Still, that didn’t stop the younger Billabong clan from bringing full-throttle energy levels into the water at Backdoor. “They had fun surf,” Hayes said. “You know – challenging and not super big, but enough that they could actually feel their different equipment.” But playing with these toys is just part of the Bloodlines program: “They’re getting a chance to have more of a relationship with the break.” A relationship nearly impossible to build when the waves are packed during the peak-winter months – a seasonal crowd these groms will be joining in no time.

One 13-year-old standout was Bells Beach native Willis Droomer. “He is exceptionally consistent, and I don’t want to say meticulous,” says Hayes, “but he seems to operate at a slightly different level. A very tuned-in young man, mentally tuned in with what’s happening in the ocean.”

Droomer hadn’t always been performing at this level though. This is the Aussie’s third Bloodlines camp experience, the years of hard work and hours logged are paying off: “He was probably […] one of the kids that was more overwhelmed on his first go-around. And now, third time around, he’s a lot more comfortable and pretty game for whatever’s happening. And that is what the program is about,” says the no-nonsense Hayes.

Two more names to add to your list of future Fantasy Surf sleepers: San Clemente’s Cannon Carr (“He’s the next hot grom coming out of Lower Trestles.”) and Japanese phenom Monnojo Yahagi. Hayes, who has coached Billabong’s talented Moniz Ohana, surfing siblings Dax and Finn McGill, Brodi Sale, Ocean Macedo, and several others over the course of his career, knows how to spot the standout competitors of the next generation.

Proving that Blood(lines) is thicker than water, the athletes that have “graduated” the program want to be a part of ushering in the younger generation. CTer Seth Moniz spent a day at the camp, sharing waves, shakas, wisdom, and laughs with the batch of young guns. “It was cool to see these little groms frothing,” Moniz told me, still channeling the day’s excitement. “It brought back really good memories of me, Eithan [Osborne], [Ethan] Ewing, Griff [Colapinto], and Josh [Moniz].” Names synonymous with lucrative surf careers – living proof that Billabong is on to something here. Moniz was impressed by the talents of all the kids, but noted Hawaii’s Kai Sallas, Brodi Sale, and Jackson Bunch as standouts. As for the Aussie crop, it turns out that what he’s seen clips of is just as good, if not better, in real life. “I got to watch them that day and they’ve got really well-mannered style,” said Moniz, a man of style in his own right.

Beyond the style and mock heats, the most drastic evolution during this brief (but intense) amount of training time has nothing to do with boards and waves. “Their worlds become more large,” Hayes says. “They are able to see things on a larger perspective. A lot of times they are coming in as a big fish in a small pond where they live… they only surf their local break or don’t really surf too many places then coming to surf here on the North Shore where the waves are definitely more powerful and have the potential to put anybody in their place. Their expectations are a lot less but they are pleasantly surprised when they do perform well. And even when they don’t perform in kind of larger surf there’s this whole eye-opening experience.” The payoff will be fun to watch in the next few years.