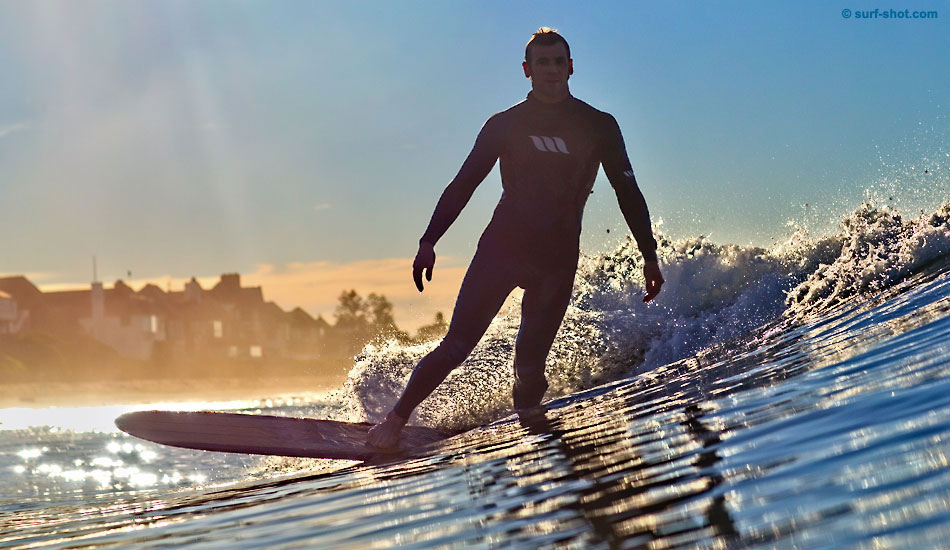 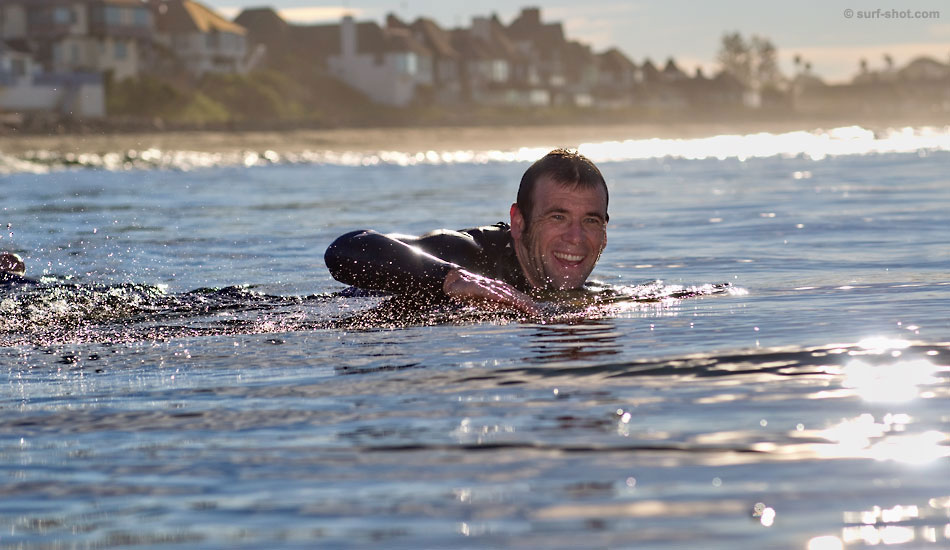 "It is constructed from thin, flat, flexible and not very buoyant wood, similar to an Alaia." Andy Powers, looking like a man without a board. Photo: Surf-Shot.com 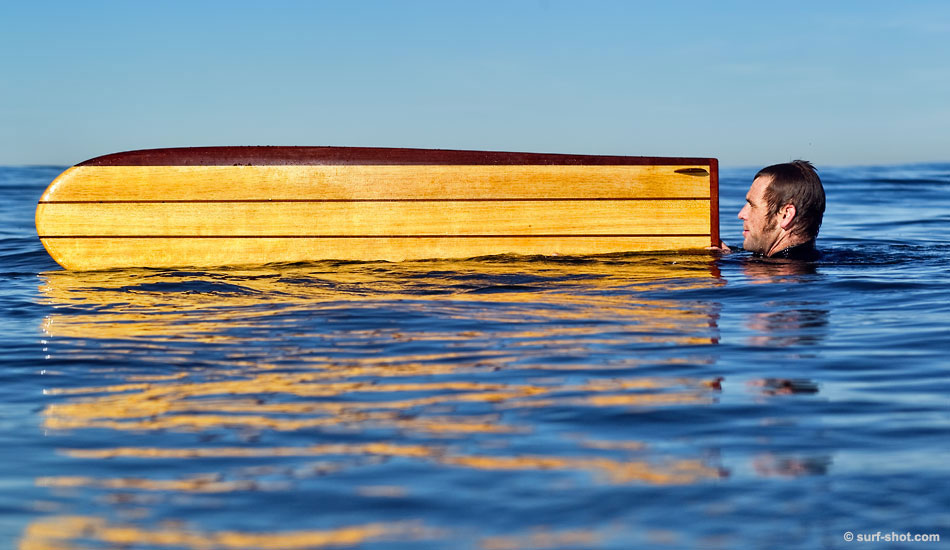 The small finlets on the corners of a wide square tail, parallel rails, and a concave bottom show inspiration from Simmons’ designs. Photo: Surf-Shot.com 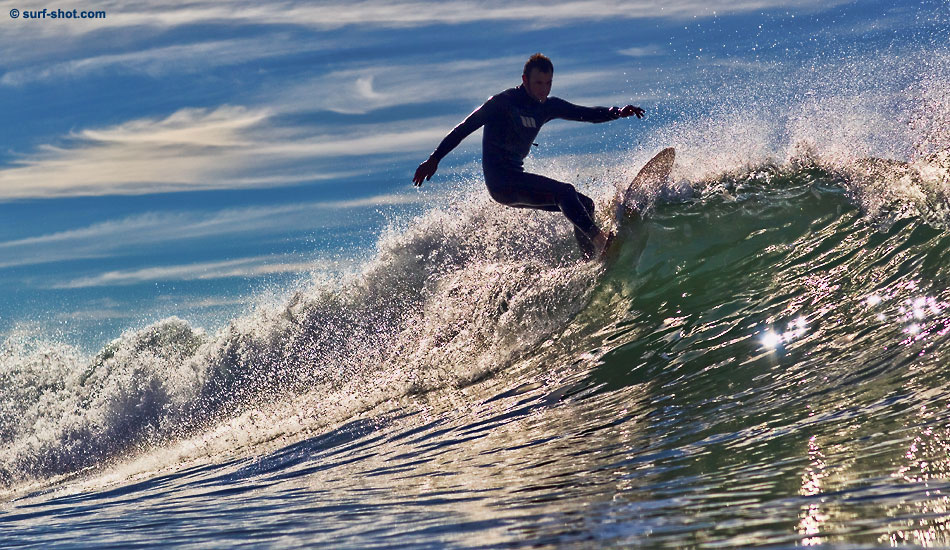 Off the lip on his creation. Photo: Surf-Shot.com 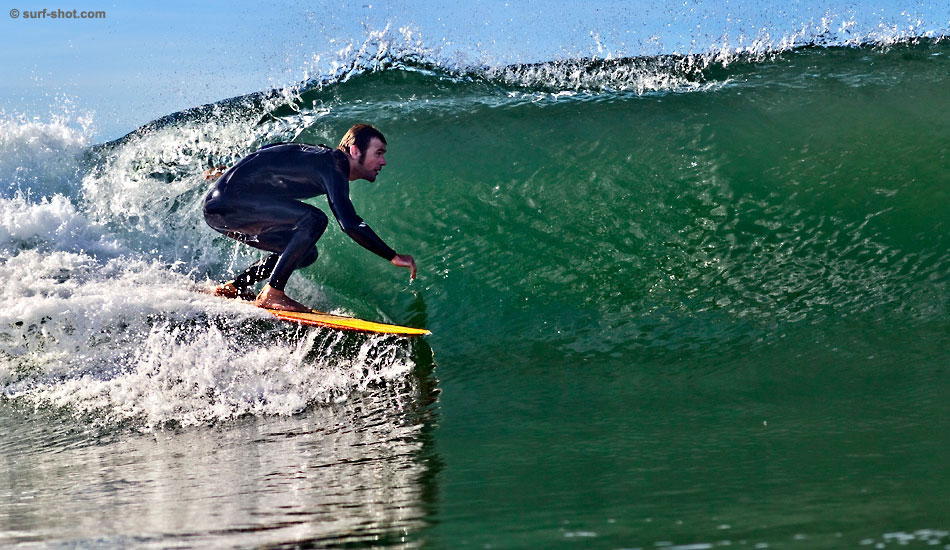 Andy Powers, tucking into one. Photo:Surf-Shot.com

There is an old adage that says: “The best surfer in the world is the one that’s having the most fun.” In that spirit, Andy Powers, surfer/musician/long distance paddler/guitar builder, has blended two old designs, the Sim and the Alaia, to create something entirely fun. Andy has come up with a challenging surfboard that makes surfing small, glassy waves even more enjoyable. With two small finlets on the corners of a wide square tail, parallel rails, and a concave bottom borrowed from Simmons’ designs, it is constructed from thin, flat, flexible and not-very-buoyant wood, similar to an Alaia.

“The rail contour seems like the important part. It has a chamfered bottom with a hard rail in the tail, slowly tapering to a very upturned rail in the nose for some forgiveness,” says Andy. “The template on my current version has a pretty smooth curve, but a slight concave in the middle of the board’s outline. This seems to really help the tail stick to the wave and hold a clean trim.”

While his first attempt didn’t perform as hoped, it showed enough promise to merit pursuing the idea. After building two or three more with small changes in each, the current prototype is six foot-three inches long, fifteen and one half inches wide and about an inch thick. Constructed from light balsa wood with redwood rails, it weighs in at about six pounds.

The redwood in the rails comes from the studs of a beach cottage that dates back to the early 1900s. Andy’s dad, a contractor, was remodeling it. “The redwood shows some patched up nail holes here and there,” Andy says. “The material (besides being free) was way too cool to simply throw away, when I could be giving it another go-round. Might as well let that straight and true old tree a chance to glide.”