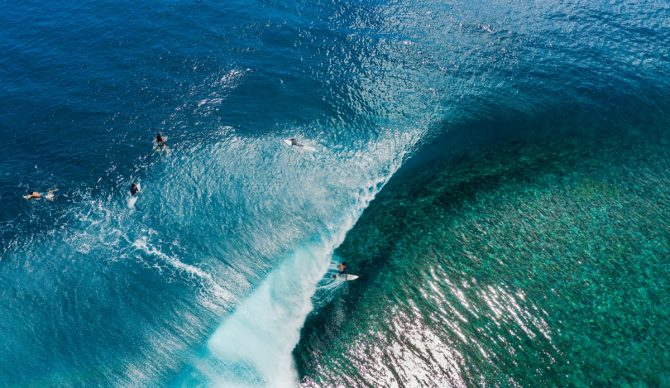 Nick Gruen first got behind a lens before he was a teenager — his parents handed him a film camera when he was just 12 years old. And his path from that first camera to his work today seems to have been anything but straight. He’s worked as a lifeguard in Encinitas, Calif., he’s moved across the Pacific from California to Hawaii, and surf photography has only been a part of his repertoire the past five years. Now 26, a scroll through his Instagram feed highlights everything from underwater photography to head-turning bird’s eye shots over the Golden Gate Bridge and anything you can snap a photo of in between.

You can easily call him a Jack of All Trades, yet the most intriguing part of his story as a photographer is what sparked his award-winning work piloting drones.

“I got a lot of injuries diving, big wave surfing, and I managed to break my back out at Pipe a couple years ago,” he says like it’s a casual foot note that might slip by unnoticed. Just another unlikely chapter in a story that saw Gruen win this year’s Aerial Photography division of The Inertia’s Film and Photo Challenge and something that prompted him to start piloting drones.

“Yeah, that (broken back) kinda messed me up for a good minute. And (it inspired me to get into the drone stuff) right away.”

With a new craft to pour himself into, Gruen had to learn new skillsets for his work.

“You really are doing everything you would as a photographer or videographer,” he says. “But then you’re also flying the drone.” He compares it to playing a video game — an expensive one — where getting the shot is dependent on his skills piloting the drone itself. The slightest mishap handling the controller can send thousands of dollars worth of equipment crashing down. And if you lose a drone over the reef, at Pipe, as he points out, you’re not getting it back. 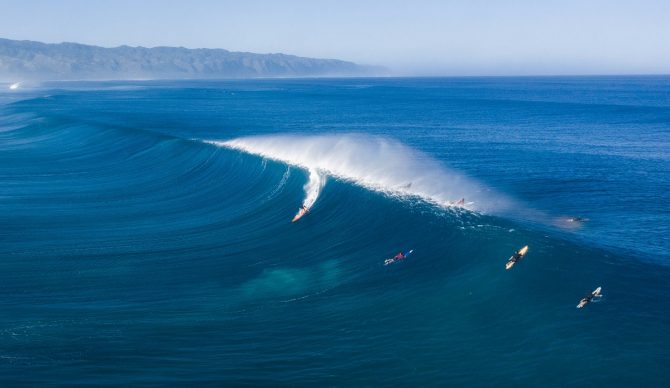 Gruen’s drone photography was recognized pretty quickly. In just three years since he started flying one, he’s been commissioned to work and travel with John John Florence and even the WSL. A life-changing injury had obviously opened up opportunities and with that, his path (and insight) feels like it parallels the artistry aerial photography has added to the surf world. This is the  first time Gruen’s work has won him an award.

“It is nice to have a drone because that gives you perspective that people can’t mimic with their phone quite yet,” he says, pointing out that landscape and lineup photography today is filled with talented work. But drone photography is still fresh and new because the same shots always required access to a helicopter before. “It’s not as readily available or oversaturated,” he says.

Neither the injury or the newfound specialty kept Nick out of the water for good, though. He says he still gets in the water as often as possible and will find himself swimming back into the lineup at Pipe from time to time. The only difference is now he has something pulling him back on land.

“There are definitely days where the clarity (of the water) is perfect. You see all the reef, you see fish swimming around. It’s pumping, maybe a foot or two overhead, and you’re like ‘Dude, what am I doing? This would look way better on a drone.’”

Editor’s Note: We would like to thank every photographer and filmmaker that submitted entries to The Inertia’s Film&Photo Challenge. We were humbled by the quality, and the quantity, of the work submitted. Thanks to our partner, White Claw, for helping to make it all happen.