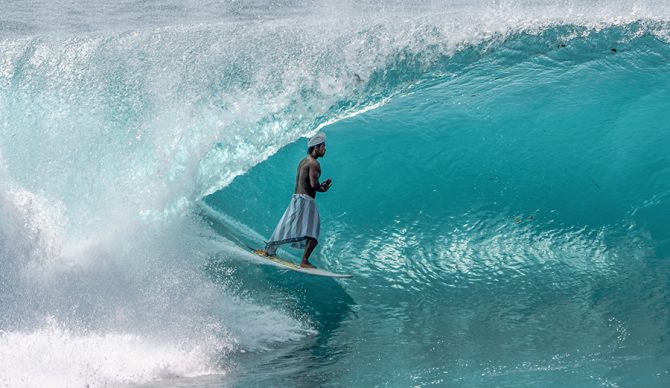 Even though waves are at the core of Bali’s financial well being, Balinese surfers often treat them like holy spirits as well. Koki Hendrawan gives thanks at Padang Padang. Photo: SaltyVagabond

With a rollercoaster of Pandemic lockdown protocols in place here on Bali, it’s easy to lose track of what is precisely happening precisely where. Beaches and businesses open and close like the locks of the Panama Canal. With a restaurant and club curfew currently set at 9 p.m., the omnipresent Bali surfer parties have been driven deep underground.

A universe of new-normal gatherings have developed. And with them, a collective attitude of clandestine island celebration. COVID as a boon to enjoy the way it was. Particularly with the chosen few who have either had no choice but to stick around or those who have had the guts to be here all along. And with South Bali’s economy totally dependent on tourism, it’s no wonder that the local culture gives this tribe of fewer Westerners cautious leeway when it comes to existing here in the time of
COVID -19.

So within the expat, digital nomad, pandemic-trapped Westerners here, a strange sense of freedom has fallen over the island. Regardless of the legal and financial hardships, being Western and hanging in Bali without the crushing crowds and overloaded traffic is intoxicating. Much has been made of how empty the surf has been, but keep in mind that this translates on shore as well. Walking through abandoned districts of downtown Kuta, usually wall-to-wall with revelers of every stripe and now a place where packs of feral dogs prowl, can give one a sense of exclusivity. Even of empowerment. Like time travelers returning to a time of discovery before Bali was mobbed, the island can once again feel like one’s own. And consequently, a certain attitude of Western ownership has arisen.

Of course this has also given rise to a tribe that can take things too far with this new found freedom. As evidenced by the latest purge of Western lockdown offenders. Like that “influencer” who shot her mouth off about Bali being a haven for visa avoiders and that lunatic Russian “influencer” who ran his scooter off the end of a pier with a bikini-clad woman on his back. Both deported tout de suite. With a mask mandate that has you doing push-ups on the side of the road if you get caught without one, Bali takes its lockdown seriously. Essential to its being perceived as a pandemic protocol-behaving island in order to lure the Aussies back once this madness is over.

Still, tradition remains stalwart. As it always has. The monthly appearance of the full moon here, or Purnama as it is known, is a deeply religious event. The gold and red festooned temples, built of black volcanic brick and mortar, become bedazzled with palm leaf origami and bundles of incense whose smoke and aroma permeates the night. Hushed worshipers dressed in colorful Kabaya’s and bleached white sarongs quietly leave offerings of flowers and candy and money and fisherman’s cigarettes. And the priests can be heard ringing their soft bells in order to appease evils and bring benevolence and balance once more to the island. Even if just for thirty more days.

But not long ago another type of full moon worship took place. And one that once again proved how seriously the Balinese take the lockdown, and more importantly, their holy sites. And this one effected surfers directly. Seems a full moon “Surfers stomp” was surreptitiously planned at one of the Holy temples that cling to the cliff sides of the island. This flashmob stomp, with its surfer crowd, was busted cold while in full swing. The “Pecalang” or neighborhood watch force, found revelers defiling the grounds with “loud music, alcohol, urination, nudity and fornication.” Quite a list considering the location of the site. The temple ground overlooks a perfect, semi-secret left fiercely protected by the Balinese locals and in-the-know Westerners. This “surf crowd” was run out of the neighborhood by force and access to the temple grounds was shut down. And so was the surfing.

In a clear example of the benevolent tourist management method here known as, “No rights, only privileges”, Westerners can have those privileges revoked at any time. But being a surf-based economy, rarely is surfing itself banned. Surfing is not only a financial boon to the locals, it’s also an enlightened pursuit and not to be taken advantage of by booze-fueled visitors. 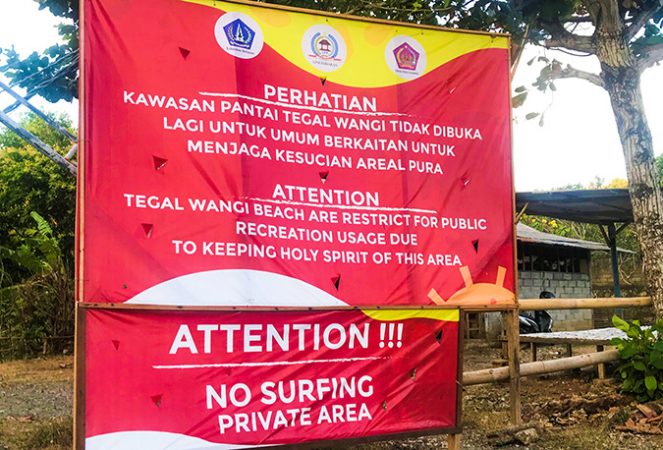 A startling reminder of how seriously the Balinese take their holy sites. And of how when surfers defile these places, they are shooting themselves in the foot, defiling the very spirit of surfing itself.

“Its hard to talk about it,” says Hindu priest-in-training and hot goofyfoot Wayan Suwara. “It disturbs the spirits. It’s harder and harder to hear the quiet from the temples that are so important to the peace of this place. At night, the spirits whisper, they do not like to have to yell to be heard”.

Speaking to others in the area, he is not alone in his opinion. Surfing is respected, but not as an excuse to gather at a known surf spot and go nuts. “I feel sad for the young local people that wake up in the morning and see everybody drunk trying to get home,” continues Suwara,“Like that is normal life. These drunk party people who speak many different languages but never ours? We found naked people in our temple on top of each other. And people pissing on our temple walls. Would you find that in a church back in Germany or a cathedral in Russia or a temple in America or wherever these people come from? Bali people are welcoming, but not to such arrogant people.”

Two-time Rip Curl Padang Padang Cup winner Mega Semadhi, himself a Hindu priest and one of the most respected figures on the island, feels that it is a matter of perspective. “This COVID situation should allow all of us here to step back and appreciate what we have,” he says. “From the religious perspective I think we Balinese pay respect to the ocean as a sacred place. A giving place. We have many ceremonies to honor it. And the land that looks upon it is not just a playground, it is a place of special worship.”

As of this writing the surfing ban for Westerners at this particular spot is still in place. Ceremonies have been performed to re-purify the grounds. It is not clear when it will be open again. But it has sent a clarion message to the surfers that remain on lockdown in Bali. That we indeed have no rights to all these magical and currently uncrowded waves. We have only privileges.
And it is our behavior on land as well as sea that defines just how many of these waves we are privileged to ride.

Editor’s Note: Matt George is a writer and editor living in Bali.