Bede Durbidge’s “Surfing Future is in Doubt” After Shattering Pelvis 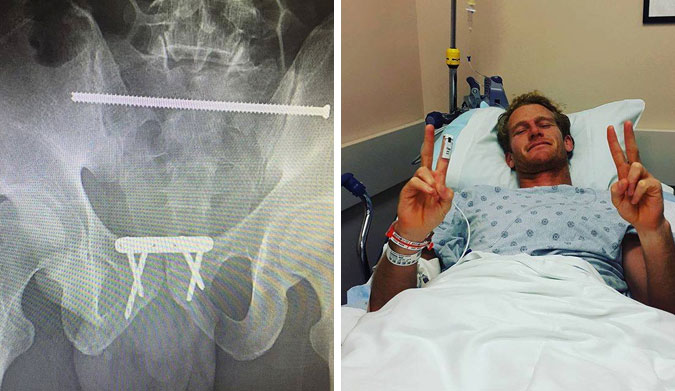 Doctors inserted a 17 cm rod, a metal plate, and four screws to hold him together. Photos: Facebook

December was a tough month for Pipeline surfers. Evan Geiselman nearly died, Owen Wright sustained a nasty head injury, and Bede Durbidge shattered his pelvis like glass. Durbidge is laid up in the hospital, and his surfing career is on shaky ground. According to a report, his “surfing future is in doubt.”

When Bede wiped out on a Pipeline bomb, it was clear that something was very, very wrong. After he was rushed to the hospital, doctors discovered that his pelvis was broken in two places. They inserted a 17 cm rod, a metal plate, and four screws to hold him together. It was a major surgery, and Durbidge’s recovery will be a long one. As the WSL’s first event of 2016 begins in three months on the Gold Coast, it’s doubtful that Bede will be able to surf.

According to Fox Sports, it’s not known when he’ll be able to leave the hospital and head home to begin the recovery process. He confirmed that he would be in a wheelchair for at least a month. “I’m not sure how long the recovery will be but I’ll be in a wheelchair for the first month, Durbidge wrote on Instagram. “It has been overwhelming with all the love and support from everyone.”

Of course, Durbidge will have a spot if he’s able to surf again. Durbidge’s courage during his ordeal at Pipeline was commended by World Surfing League Australasian tour manager Will Hayden-Smith.

“The WSL wishes Bede all the best and a speedy recovery,” said Will Hayden-Smith, WSL Australasian tour manager. “Bede is a very resilient surfer, and if anyone can make a recovery he can.”