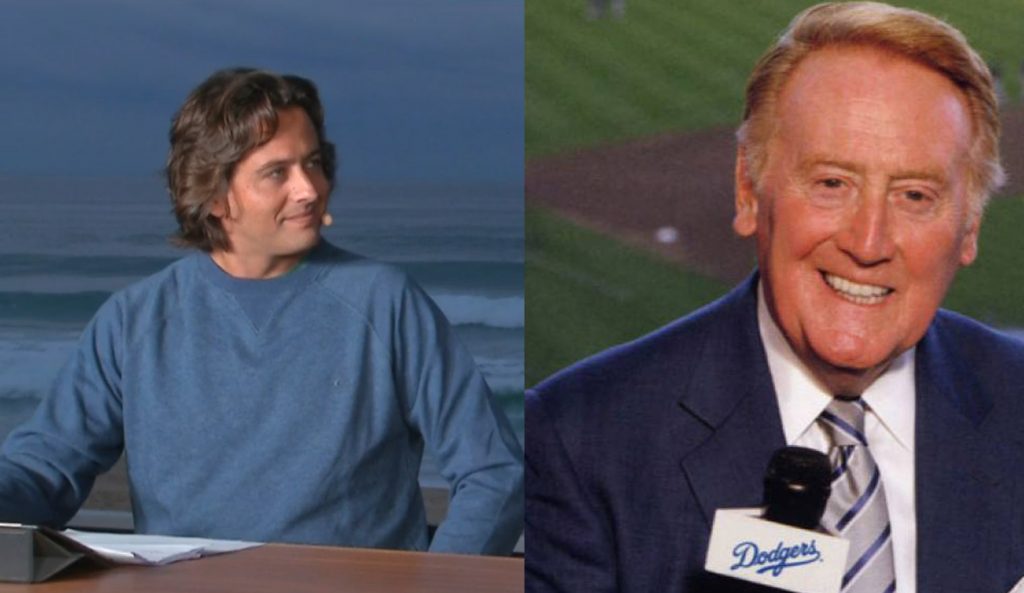 The radio lost its nostalgia last week, when Vin Scully, at 88-years-old, retired his golden voice as the play-by-play broadcaster for Dodger baseball. His absence from radio is tremendous for fans who, for the last 67 seasons, have relied on Vin’s iconic voice to accompany them on the slow drive home.

All Southern Californians have a soft spot for the voice of Vin Scully, and World Surf League commentator Joe Turpel is among them. Like Vin, Joe Turpel wasn’t a star athlete; citing an NSSA quarter-final appearance as his best ever finish. But where they differ from the veterans they commentate alongside is what we love most about them.

Vin and Joe don’t have first-hand experience as professionals, so they fill lulls with enlightening stories and cut to the action, letting it speak for itself. They deliver the highs and lows with even keel enthusiasm, delivering even the most dramatic moments in a calm manner.

I asked Joe Turpel about Vin Scully, commentating, and who we will be hearing from in the future.

Hey Joe. Thank you for your time! Growing up in Southern California, did you listen to Vin on the radio?

I was born into being a Dodger fan. My family loves them. My grandpa made sure I was a Dodger fan. I played a ton of baseball growing up and actually did a Dodgers on camera sportscaster report for my teacher Pal Eldridge at Punahou when I was in 4th grade. Before moving to Southern California I was in Hawaii, so I’d watch every Dodger highlight I could find. Vin was always there and always consistent. He will always sound like baseball to me.

Did he inspire you to call surf contests as he did for me?

He inspired me to be myself more than anything. Vin calls a game just like Vin would. He does it all by himself. So I’d channel his rhythm in the early days when I was doing beach PA announcing on my own.

What was the first surf contest you called?

First one ever was a NSSA Southwest open season contest in ’06 at Brookhurst street in Huntington. The waves were perfect. Peaks everywhere. I was losing my mind on how good it was! Jeff Lukasik got a 9.73 on a really good barrel. I remember the most random things! First webcast was the next year in Brazil.

As a commentator, your voice becomes ingrained with the sport’s history. What is your favorite sporting memory narrated by Vin Scully?

It’s definitely the Kirk Gibson moment. He didn’t say a word for the longest time and let the moment play itself out. Now, the next commentator can’t just reproduce that scene and go quiet. That’s the beauty about the job. There are two sides to it. The craft and the art. You can teach people the craft and give them a textbook on how to be a broadcaster. And then there’s the art. It can’t be taught. That was one of the many examples of Vin sharing his gift, his connection with his art of calling the game. Pure magic.

You called a shark encounter on live broadcast. Delivering what happened to Mick Fanning calmly and precisely. Something no other sportscaster will ever have to do. Is that call your Kirk Gibson Walk Off Home Run?

Man, the Kirk Gibson moment wouldn’t have been as scary! The time with Mick and the shark definitely took me to a place where I was going off instinct. That’s a place of focus you always strive to be in. The best thing that happened that day was Mick walking away without a scratch. The most meaningful part for me on the job aspect was getting messages from Mick’s mom thanking me for keeping her calm.

Now that many legends of surf are retiring, who could you see joining the webcast team?

There’s so many great characters and past champions wh0 would be amazing to work with. I’ve enjoyed the variety this year from Freddy P at the Eddie, to Bede on the Goldy, Occy in Tahiti, Barton Lynch at Lowers. We will be working with many more as the season continues.