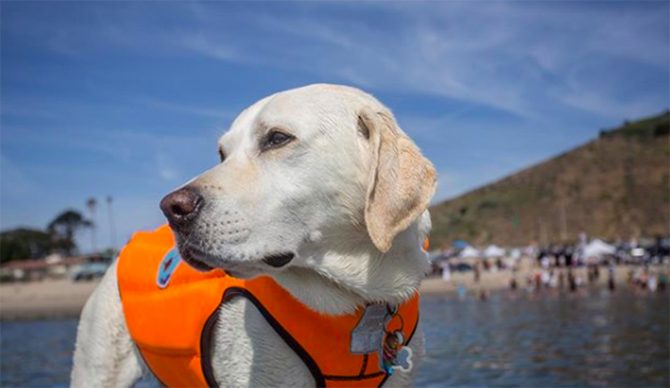 The world is filled with a lot of surfing dogs but most often, the ones who garner the most appreciation and love from the community are the handful of popular surf therapy dogs whose affinity for riding waves brings genuine comfort to those in need. Earlier this week, the beloved Haole passed away at home in Ventura after seven years of riding waves and making people smile along the way as an ambassador for A Walk On Water’s surf therapy programs. It was 21 months to the day since he’d been diagnosed with cancer, so it’s fitting that his owner described him as “the epitome of a warrior” along the way.

“This could turn into a book if I described everything about Haole – his personality, his giving heart, his old soulful eyes, his temperament, his love, guidance, commitment, dedication, bravery, smile, surfing ability, accomplishments, brotherhood, companionship, his organic ability to form long-lasting relationships, literally I could go on and on,” Haole’s Instagram account said on the day of his passing. “There will be no other like him and he may no longer live on this Earth, but he will forever live in our hearts, and I believe everyone’s heart that he met.”

The 12-year-old ambassador started surfing when he was five after “he told his parents” he wanted to ride waves by climbing on his owner’s board. For some time, he was a competing surf dog before retiring and working with the non-profit A Walk on Water, which provides surf therapy to children and adults with special needs.

“No one who witnessed Haole on a wave could possibly forget that image of grace and athleticism,” the non-profit said in its own tribute. “More than a dog who could surf, Haole was a surf therapist in the truest sense of the word.”

John and Kim Murphy, Haole’s parents, say they were able to take him out for one last wave just a few days before passing away.

“He was excited to get on his board and do what he and his Dad did so many times,” they said, sharing a video of Haole’s last session. “On this wave is a 12-year-old warrior that literally never gave in. We had no idea that three days later we would lose him, but the memories, love, surf sessions and lives he touched will fill the void in our hearts.”

Sunday 5/10/2020: We knew that our time was nearing, so we took Haole to surf his last wave. He was excited to get in his board and do what he and his Dad did so many times. On this wave is a 12 year old warrior that literally never gave in. We had no idea that 3 days later we would lose him, but the memories, love, surf sessions and lives he touched will fill the void in our hearts. I (Haole’s Mom) have decided to continue building his legacy by posting on his account. Be patient with me as I go through each and every post & comment honoring my boy, as it has become so very apparent he made such an impact. We are eternally grateful 🧡 #ShredOneForHaole #StandWithHaole #LoveBeatsCancer