Bethany Hamilton is arguably the most famous surfer alive today. Her harrowing tale of surviving a shark attack as a teen, when she lost her left arm, was documented in a book, a documentary, and later a feature film. But, despite her incredible surfing achievements over a decade-and-a-half since that fateful day, ask around from Carlsbad, California to Topeka, Kansas who Bethany Hamilton is and you’re likely to get a similar response: “Isn’t she the girl that survived a shark attack?”

Of course if you’ve paid any attention to Hamilton’s trajectory in recent years, somehow “survivor” is an insufficient descriptor. “Thriver” is closer to reality. Despite the odds, Bethany Hamilton has refused to let a single day define her life, and while the potrayal of her story to this point in popular culture has been bookended with her return to competition after the attack, there’s a lot more to the woman that continues to inspire surfers and non-surfers alike.

In Unstoppable, a film project six years in the making, Aaron Lieber takes viewers behind Hamilton’s grueling training regimen, lofty ambitions like surfing Jaws and mastering aerial surfing, and an unforeseen journey through the early days of motherhood (when everyone outside her team thought she was “insane” for sufing Pipeline). I caught up with Lieber before the film’s recent cinematic release. 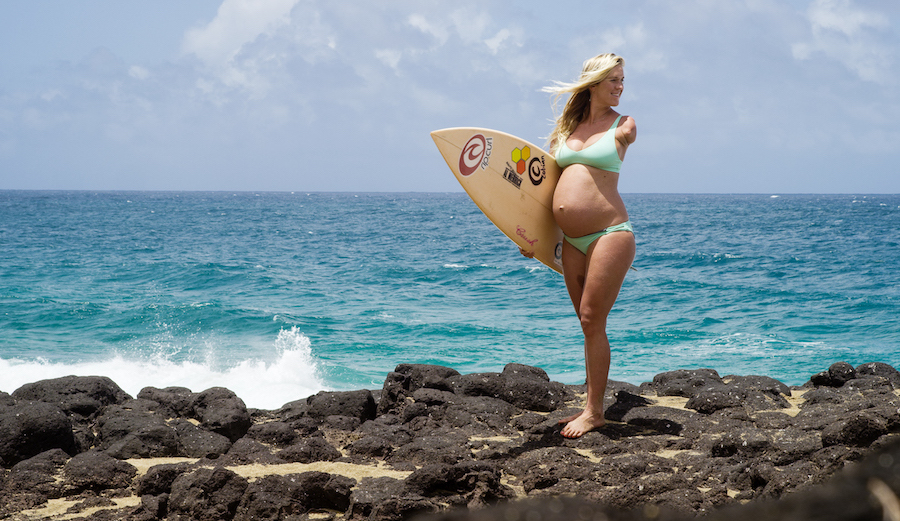 “Six months after we started the project, Bethany and her husband Adam [Dirks] got pregnant with their first son Tobias. And for two weeks there we weren’t sure what was going to happen.” Photo: Aaron Lieber

Bethany Hamilton’s story is well-known at this point. But, what attracted you as a filmmaker to it and taking the audience beyond what people already knew?

Seven years ago I was finishing Lakey [Peterson’s] film and Bethany was on a trip (with us) for that movie and she was ripping, like on a different level. And I said, “It’d be amazing if we made a shred clip and showed the world how good of a surfer you are.”

A year later Lakey [Peterson’s] film came out and Bethany texted me saying she loved the film and wanted to do a project. So we started with an idea for a film that was just centered around her athletic ability. And then we had this background idea that Bethany’s audience doesn’t know that much about her life now so maybe we’d do a little bit of a story with it.

Six months after we started the project, Bethany and her husband Adam [Dirks] got pregnant with their first son Tobias. For two weeks there we weren’t sure what was going to happen and if Bethany wanted to keep filming or what. But, ultimately she decided she wanted to keep going and I followed her through her pregnancy. After she had Tobias, she went straight back to her goals like competing on the Championship Tour with wildcards, surfing Jaws, and all these things.

I definitely had a vision for the film, but I tried to tell the story the way Bethany sees her own life and how she sees herself. 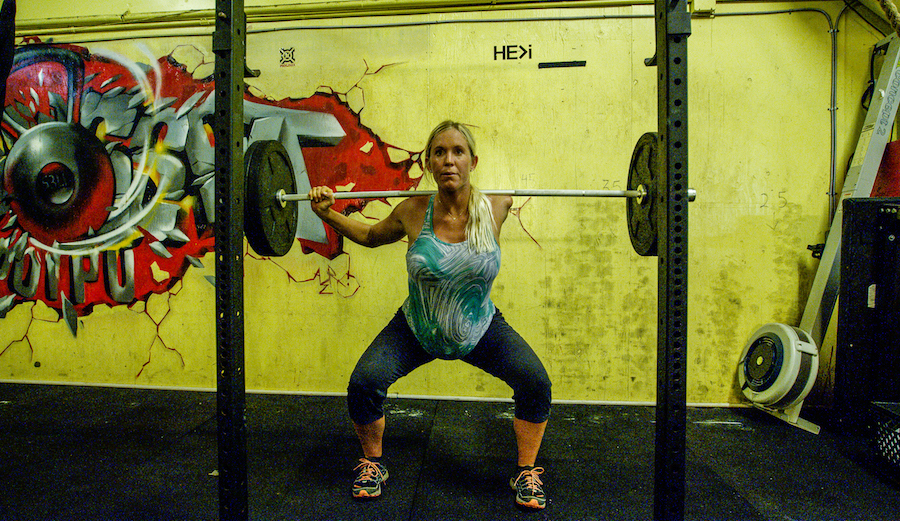 “In our own lives, we all face challenges, whether they’re mental or physical and we have a choice of succumbing to fear or to overcome. And Bethany is such a great example of that.” Photo: Aaron Lieber

So, how does Bethany see herself?

At a really young age, as you see from some of the archival footage, she was really a confident, dominant surfer. You see her winning the Rell Sunn contest and there’s footage of her standing next to Coco Ho, Alana [Blanchard], and Carissa [Moore], and she’s like twice the size of these girls. She just had this presence and confidence. Of course, she loses her arm to the shark, which is an important crossroads for her. But, she quickly realizes that who she is and what she’s all about is surfing and being an athlete. Nothing has changed.

I think Hollywood and the media tended to latch on to the idea that here’s this cute young blonde girl that’s smiling and kind of seems unphased by this incident. It’s what she becomes known for – being the survivor of a shark attack. But, she wants to be known as an athlete because that’s what she’s passionate about. So there’s this duality where that’s a huge part of her life, but she’s a mom now and a wife, and she’s still competing and charging Jaws and getting better at air reverses.

In our own lives, we all face challenges, whether they’re mental or physical and we have a choice of succumbing to fear or to overcome. And Bethany is such a great example of that. In a really organic way, I think, the film addresses how we adapt and challenges how we perceive ourselves, and how others perceive us.

In the film, Bethany surfs Teahupo’o and Pipe pregnant. From a filmmaking standpoint, were you conflicted about documenting that?

So, first she surfed Teahupo’o and none of us knew she was pregnant. I mean, maybe her and Adam (her husband) knew but I didn’t find out until a few months later. She was surfing Pipeline with Stephanie Gilmore, Carissa Moore, and Tyler Wright for the Women’s Pipe Invitational, and I did know.

It’s one of those things where when you know Bethany, you know how strong she is in the water and how she just knows what she’s doing out there while also getting advice from her doctors and other people. So, while some people could fall off a curb and hurt themselves, she can surf Pipe and she’s fine. Obviously, there’s risk in anything you do in life, but she understood that the baby in the womb at that point was very protected and for her, that’s just her element.

From the outside, though, everyone was like, “What? You’re insane!” Later in her pregnancy, there were photos of her longboarding, and there was some backlash online about it. But, because this is something Bethany does every day and she knows her body so well, she knows how to adjust to not bother her belly. And actually, she says in the film that her surfing got smoother while pregnant because she had to compensate for the extra weight and let the wave do more of the work. 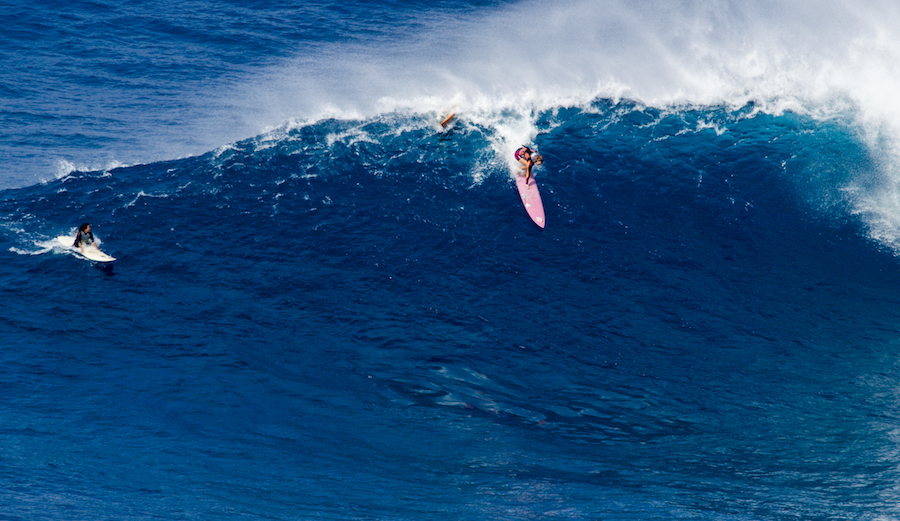 “After Bethany had Tobias, she went straight back to her goals like competing on the Championship Tour with wildcards and surfing Jaws.” Photo: Aaron Lieber

What was it like to take the film down that unexpected path documenting a really intimate life change, like having a baby?

Two things. One is, through the journey it’s constantly communicating with her and her husband Adam about what we’re going to capture, when we’re going to capture it and finding that balance of them having privacy on some level but also being open and vulnerable. It’s a tightrope you’re always walking. So, one of the ways I had more access was I told Bethany to let me shoot things and told her that once we got to edit she would have final say on including things or scrapping them. And when she saw edits put together, often she was comfortable with how it looked and felt.

Then, I kind of looked at pregnancy happening in three trimesters, but through this process, I really learned that it’s four. You know, the fourth trimester is really the chaos that comes once the child is born with breastfeeding and not sleeping and all the chaos that is having a child. I learned a lot about the nervousness of a new mother and not feeling ready to have a child. So, there’s so much I learned about the arc of pregnancy and having a child that I think is really insightful in the film. 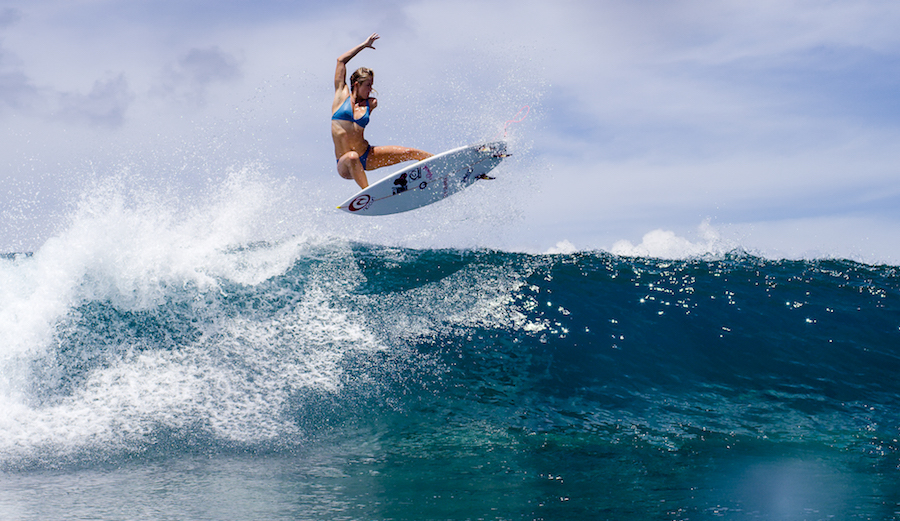 It took months of training for Bethany to stick her first air reverse. Photo: Aaron Lieber

What’s the message you hope the audience gets from the film if you had to put it to words?

Maybe this sounds slightly cheesy, but it’s that they be unstoppable in their own lives. It’s weird to say that because usually you make a film to just make a film and tell a good story that’s compelling. But, because Bethany is still alive and still so compelling, this story really almost has a call to action. It’s like Bethany chooses to overcome all the time and so can you. I think that’s a really powerful message in today’s politics, where Bethany is this kind of human that just cuts down the middle. So many people that have come out to see the film have come out of it so happy, that it’s really inspiring to see that.

Editor’s Note: Unstoppable is now in theaters nationwide. For tickets and information click here and check out our review of the film here.