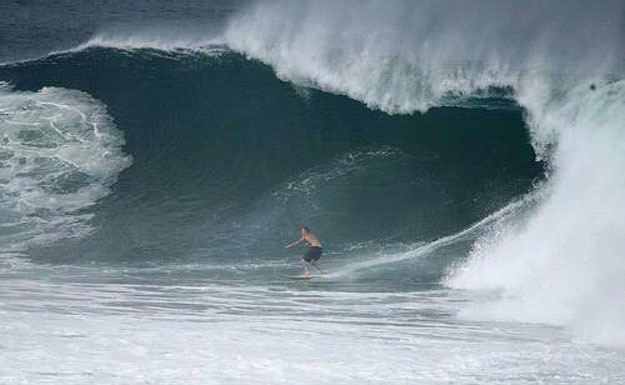 Gasping for air after a two-wave hold-down at 25-foot Puerto Escondido, the man the locals and travelers call “Daz” was disoriented and boardless. He began swimming to the harbor only to hear the sweet sound of Shane Dorian whistling a jet ski to intercept him.

Daz was the bartender at Tower Bridge in Puerto Escondido and made a business of partying all night, waking up at the crack of dawn to avoid the onshore winds accompanied with the afternoon, walking 20 minutes on rough ground to the beach without ever checking the report and surfing no matter what. Daz was luckily scoring the pumping Mexican Pipeline all summer long with his simplistic routine. On that particular morning, he stood watching it from the harbor, a solid half mile paddle from the lineup, half-drunk, dehydrated and completely unprepared from previous night’s “business,” but ready to surf nonetheless. “I could tell it had some size, there wasn’t really anyone out, there was no wind and it was hard to measure the size from where I was looking,” Daz said. The ocean had an ominous texture that resembled fast-moving storm clouds. It was stirred up from the pumping surf.

The closer Daz paddled to the breakers, the weirder things got. The mountainous sets became more visible, avalanching all the way to the beach, jet skis buzzed about surveying the scene, and the selective group of surfers scraped up the steep faces and over the bushy lips like matadors dodging the horns of a fuming bull. Daz realized he was out of his league when he saw Shane Dorian, and out of respect and fear of embarrassment in front of his idol, he began paddling away. Before Daz could exhale to gather his thoughts, he heard Dorian yelp at him, pointing outside to the biggest set wave he ever laid eyes on. Adrenalin started pumping, his heart was racing and his arms were motoring like all hell.

When Shane Dorian says go, you go. At the top of the lip he could feel his energy transition to sheer power as the wave was at its tipping point. He stared across the glassy face, set his line, made the drop and shot across the mass of salt water. The wave caught up with him and closed out, thrashing him about like a rag doll. “I was just trying to chill, but I was starving for air,” Daz said. “I think I would’ve died if I didn’t have all the adrenalin pumping through my body.”

It was the biggest wave of his life and it was in front of his idol and royalty of big-wave surfing. Shane sent for his jet ski to give Daz a hand. Trying to contain his stoke was impossible. He was grinning from ear to ear, happy to be alive, happy to have caught that bomb, and happy to get some respect, hoots and hollers from one of the greats. Arriving back on the beach, Daz felt like a hero. He basked in his glory with the crowd that big waves bring for a few minutes, and then began the walk back to Tower Bridge alone in the beaming afternoon sun. His palms were sweaty, he was shaking from the mass amounts of adrenalin, he was completely dehydrated and he was freaking from the near-death experience and elated from the wave of his life.

Just another day at Puerto Escondido.