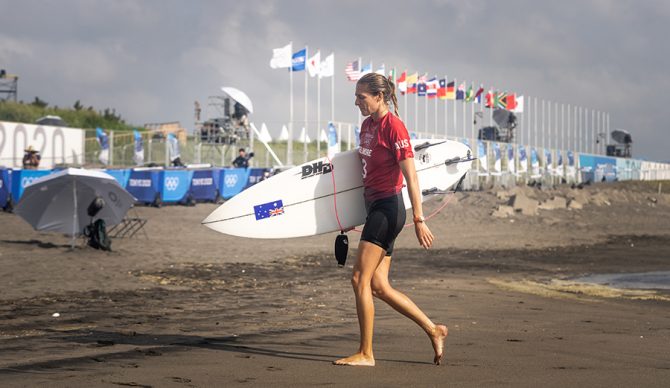 In a chaotic day of Olympic surfing that saw high winds from an offshore typhoon and the biggest surf of the contest window, the ISA soldiered through a delay that nearly postponed the event to finish a wild Round 3 where big names were sent packing. The biggest of those names were Australians – Steph Gilmore and Julian Wilson both lost elimination heats.

Gilmore went down to South African Bianca Buitendag, who found her footing against the seven-time world champ when Gilmore let Buitendag flip the heat by taking an important wave under priority. It was a disappointing loss for Gilmore, who surfed so fluidly on Day 1, racking up the highest combined heat score of the contest. “I looked at that wave and I was like, ‘I don’t know, it doesn’t look that good’ so I let her have it and she turned it into a seven,” an emotional Gilmore said after. “That was the most frustrating thing for me. I should have taken that wave and just held control of the situation. That was a tough one.”

Buitendag will face off against Portugal’s Yolanda Hopkins Sequeira in the quarterfinals tomorrow. “I faced Steph a few times on the CT but she obliterated me,” a humble Buitendag said after. “I made the most of the opportunity but I don’t feel pleasure in beating someone. You feel good that you surfed to your ability but it doesn’t feel (fantastic or anything) to beat someone (and send them home). 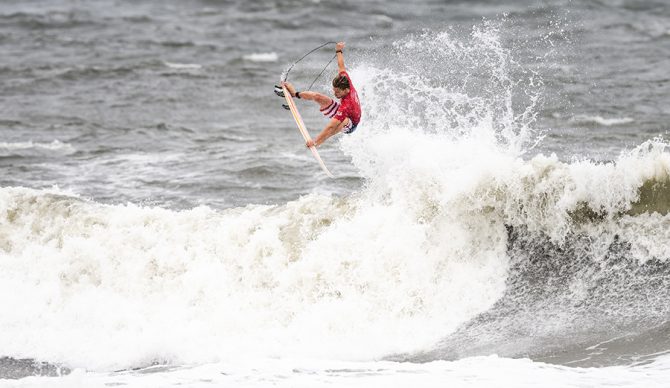 Kolohe Andino and John John Florence faced off in a much-anticipated matchup (albeit disappointing for American surf fans) early in the men’s Day 2 draw. Both have fought through serious injuries of late, and Andino, perhaps the least injured of the two with his high ankle sprain that required surgery, went right after Florence who’s still trying to recover from ACL surgery two months ago.

Andino opened up his scoring with a clean air reverse (lest we forget the slob grab) that was not small, pulling an awkward throat slashing claim after landing on his way to a heat win. I had to ask if he thought the gesture might be offensive towards the still-hobbled Florence. “It just came out,” he said “I always tell myself not to claim but it just came out, especially when you make a maneuver like that. I haven’t made a maneuver like that in probably seven or eight months. I just surprised myself.” Andino has a tough matchup tomorrow against Kanoa Igarashi in the quarters.

As we reported earlier, Florence, who surfed as well as he has all event in the loss, hinted that he might not finish the season on the CT because of the injury and should make an announcement either way later this week.

The contest site sits between two jetty arms that jut out in the ocean like long, bony fingers, marking a quarter-mile long section of beachbreak for competitors. In the morning, the contest site at Tsurigasaki was closer to to the south jetty, then was shifted north into the middle after the midday delay. That’s when Wilson came up against Gabriel Medina in one of the more tightly contested heats. 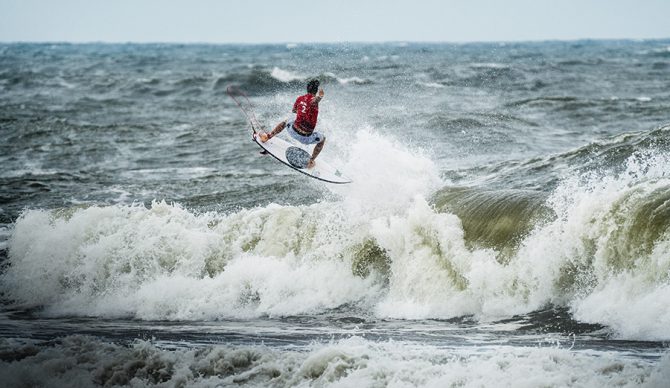 Medina may feel human but he still does things that make him seem out of this world. Photo: Pablo Jimenez

In cliched boxing parlance, the two traded blows throughout, with Medina’s air game pushing Wilson to the brink. With around a minute left, the Australian baited the Brazilian into taking a wave as Medina held priority. In the closing seconds, Wilson took off on a head-high roller that stood up as he threw a tail-high reverse with a difficult landing when the bottom of the wave dropped out. Wilson was able to stick it but needed a score in the eight-point range. He got a 6.83 and was clearly disappointed with the judges’ decision on the one-maneuver ride.

“I needed my best wave of the heat and I was really happy with how I performed,” he said. “I was hoping to get the score. It was a super-critical section. I’ve been watching Gabe and Italo get massive scores for those types of airs all year.”

Wilson told the media that the Australian team logged an official protest with the ISA, claiming that Medina had taken off on a wave outside the contest zone. The ISA confirmed to The Inertia that the claim was denied.

Medina, for his part was grateful to be competing against Wilson in his last heat after the Australian announced this month he’d be taking a break from the Championship Tour once the Olympics were over. The Brazilian has looked extremely relaxed all season and Japan has been no different. Having been around him at different contests over the years, he no longer seems stiff or robotic and even lets his guard down a bit to media and fans.

“It’s been fun, I’ve been taking life easier,” he told me. “I want to enjoy my moment. I used to have a lot of pressure. When I touch the water now I think about nothing. I have my wife Yasmin. My life has changed after that. I’m so happy to live in this moment. It feels good to feel like a human being and not just a comp machine. It’s just different. It was good to stay home for a while (with the pandemic). I just want to enjoy the moment.” 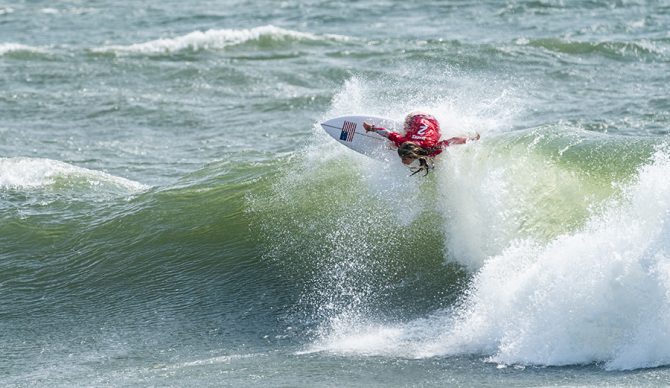 The American women continued their fiery pillage of the contest roster as Caroline Marks, with that distinctive forearm positioning, took down Oahu’s Mahina Maeda (surfing for Japan)  with a steady dose of nasty backhand bashes and two rides in the excellent range. The Floridian will face Brisa Hennessy tomorrow in the quarters.

Meanwhile Carissa Moore took out Peruvian legend Sofia Mulánovich. At 38, Mulánovich, the 2004 world champ, put up a valiant fight against Moore, holding the lead halfway through the heat before Moore (who seems supremely dialed in) went to work. “I knew Sophia was going to be tough to beat, ” Moore told The Inertia. “She’s someone I’ve looked up to since I was a little girl. When I was watching contests I wanted to be like her. I got to surf with her a few years on the CT at the beginning of my career. It’s really inspiring to see her kicking butt and gives me a lot of inspiration.”

Moore talked about the differences between the emotions of the Olympics and a CT event and what she’s doing to keep it real. “This whole setup is huge and a bit overwhelming,” Moore said. “I don’t have my team here so I’m navigating it on my own. Pressure-wise, I’m trying not to overthink it. You put your jersey on and it’s like any other contest.”

In a nod to the host country, the Japanese media throng went wild when Hiroto Ohhara advanced to the quarterfinals. Unfortunately for him it won’t be easy. He faces Italo Ferreira who has been on a tear the last two days, airing at will, making it look like he’s simply strolling to the coffee shop.

Tomorrow conditions are forecasted to improve, which could possibly line up a dream day for the ISA.

You can find full results from Day 2 at the 2020 Olympic surf venue in Japan here.