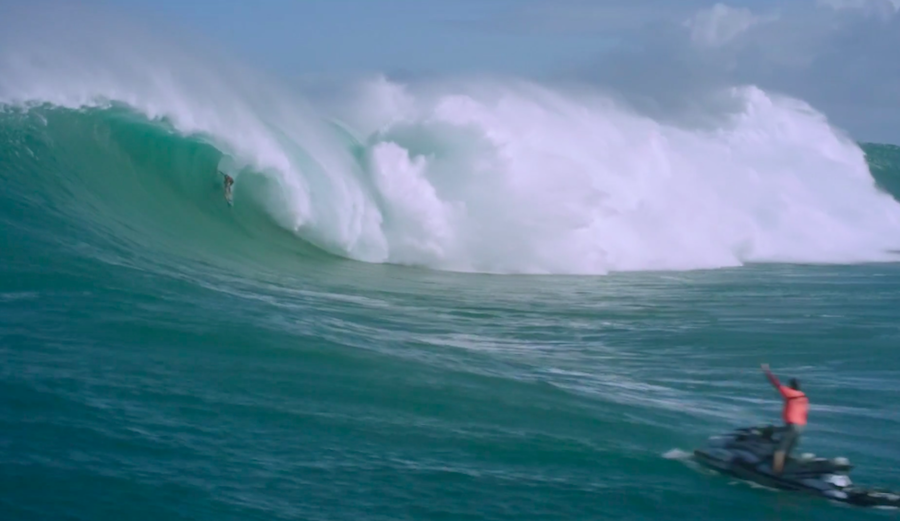 Billy Kemper fully slotted in Round 1. This is Kemper’s third win at Jaws. Photo: WSL

Maui local Billy Kemper just claimed his third win at Jaws since the event’s inception in 2015, cementing him as the most iconic competitor ever at Maui’s big wave crown jewel. It also placed him squarely in contention to defend his 2017 Big Wave Tour title.

This year’s event was nothing if not controversial. After running the women’s event through its entirety Monday, the men hit the water. But following a rowdy first heat (bordering on scary), BWT Commissioner Mike Parsons had seen enough, informing media and fans that conditions had become unsafe and that competition would be put on hold.

And even though he was actually knocked unconscious in a completely out-of-control heat that also saw Grant Baker pack a gigantic barrel and end up on the medical boat,  Billy seemed sincerely bummed.

“Somebody will win ‘Ride of the Year’ if they do call this thing off,” he said during the webcast. “It is gnarly, it is dangerous, but this is what we live and train for. We’re going for the Big Wave World Title, right? You want the biggest, nutsest’ waves in the world? This is it.” (See also: Kai Lenny’s tow-in highlights from after the contest.)

Come Tuesday the swell had dropped some, but the trade winds, lovingly referred to as “Maui glass,” had far from subsided. Conditions were tricky to say the least.

Local knowledge prevailed as four of the six surfers to make the final hailed from Maui – each with a taste for pulling into giant, unruly barrels.

In his acceptance speech, Kemper was emotional about his victory – explaining that earlier this year he’d had a hip injury he wasn’t sure he’d come back from. And in March, the big wave charger lost his mother, Lisa, to throat cancer.

“Once again I dedicate this to my mom,” he said, pounding his chest and holding back tears while pointing to the sky. “If you’re looking down on me mom, I love you and this one’s for you.”