Blue Uprising’s ‘I Surf. I Vote.’ Event Is Something Everyone Should Attend 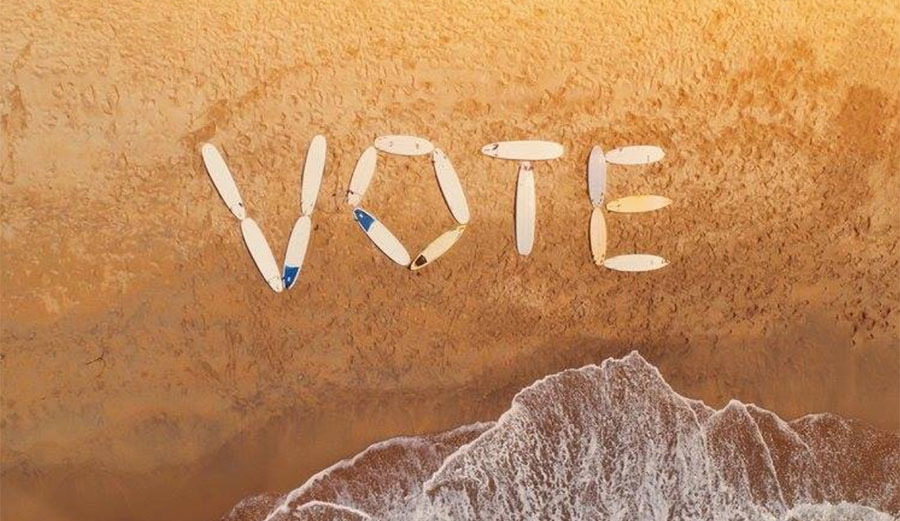 You surf. You should vote. Image: Blue Uprising/Facebook

Filmmaker, sportscaster, and journalist Angela Sun will be the featured speaker on our third stop of the “I Surf. I Vote.” tour. Angela is a passionate surfer who happens to also be an Emmy-nominated journalist. She directed and produced the feature-length documentary Plastic Paradise: The Great Pacific Garbage Patch, examining plastic pollution in the oceans and the effect on the environment, marine life, and humans. Angela is the first Asian-American female sportscaster on ESPN, Yahoo! Sports, Tennis Channel, Fox Sports, and NBC.

“I’ve traveled the world and have spoken to a diverse array of audiences about single-use plastics and I often get asked about what we as consumers can personally do about this issue,” Angela said. “It all starts with education and awareness. Lead by example by bringing your own and refusing single-use plastic. This issue may seem insurmountable but when you start locally, tangible change is possible. When you use your voice and vote on the local level, you really are making a difference. I didn’t feel adequate to speak in front of city council and wasn’t planning on it, but I did it anyway. I learned that I have a voice in public matters, and it was actually heard. Progress starts with citizens coming together like we did in Santa Monica and thank you to the council for listening.”

We are stoked to have Angela appear at I Surf. I Vote to share with us her perspective on the importance of voting in local elections, based on her experience as an advocate for environmental causes. She has been leading the way as an ocean conservationist–from surveying coral reefs in Thailand in 2009 to speaking at universities, companies and organizations, to engaging youth worldwide for over a decade.

This event allows nonprofits, campaigns, businesses, and political organizations to come together in a non-partisan manner with one goal: to galvanize the surfing community’s voice for the ocean.

We will assemble a minimum of nineteen surfboards to spell out “VOTE” in the sand and use a drone to capture an iconic image. Additionally, we will ask participants to record their “I Surf, I Vote” videos on site.

Here is our timeline on the 19th:

Please come and bring surfboards. We would also appreciate any help with promoting the event.

If you would like to participate in helping organize, even though last minute, please email us at William@BlueUprising.org.

Thank you for your consideration and we would be stoked to have you there.