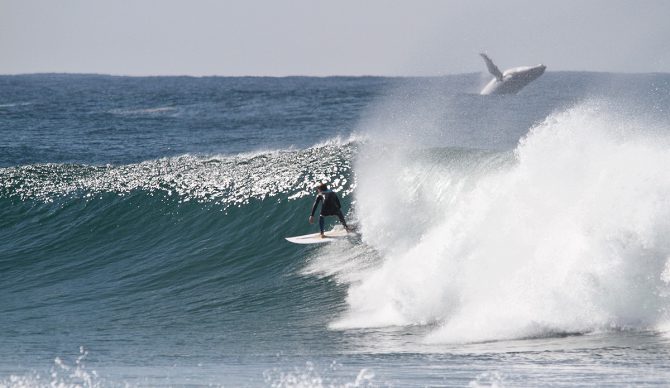 Whale breaching in the background. Surfer on perfect point in the foreground. This image was a decade in the making. Photo: Luke Jones

Every once in a while, we see a photo that captures our attention for more than just its aesthetic appeal. It’s certainly true that a single frame can tell a story, but sometimes actually hearing that story gives you an entirely new appreciation for it all. This was the case when an image from Byron Bay photographer Luke Jones was brought to our attention: a single surfer racing down the kind of wave that would make one’s winter, a humpback whale breaching in the background, all from a photographer who had waited 10 years for an image like this.

Jones tells The Inertia he started this particular Friday morning curious what the surf was doing. After handling the daily parental duty of getting the kids off to daycare, he was meant to go to work, but something about the stillness in the air kept poking at his curiosity. So Jones checked one of his usual spots.

“Between Ballina and Byron Bay’s ‘The Pass’ there are a handful of right-handers along that stretch, but this particular one is without a doubt my favorite,” he explains. “I pull in the track, park, and almost before noticing the surf is around the three- to six-foot mark, I see a whale launch, which gets me pretty amped as I’ve only spotted a few quite a long way out to sea acting playful.”

Before long, Jones breaks the camera is out and starts firing off shots of surfers on overhead waves. He notices three whales about 200 meters offshore while the surfers are taking off as much as 50 meters from the rocks. Ocassionally, a whale moves to within about 150 meters, putting the two in reasonably close quarters.

“I’m pretty much swinging the camera lens from left to right, overexcited with all the action unfolding that I actually forget about everything,” Jones says.

And by “everything,” he means he forgot he had planned to go to work. So he’s late. On top of that, he’s so busy with his camera that he’s also forgotten to grab his board and catch a few waves for himself. Two hours go by perched on top of his Toyota van, he’s downed two liters of water, and never even bothered to put on sunscreen.

“I’m all of a sudden thinking to myself, ‘Shit, I’ve gotta go and get some work done,'” Jones adds. “I’m a self-employed carpenter, which is the only reason I’m staring at the ocean at 10 in the morning and it’s now too late to even surf myself.”

Laser-focused on the viewfinder, he’s following ripples along the surface of the water, hoping to catch just one shot of a breaching whale.

“Next minute someone yells out ‘This dude’s on a nice one!’ It’s Ned, a young bloke, very humble and quietly spoken. I quickly look up, spot his position, look through my viewfinder, center him, focus, then fire off about 10 frames. In the background, I notice a big humpback whale. Something’s happening. I think ‘No way. I haven’t, have I?‘”

Jones immediately dials his last burst from Ned’s wave. He’d only meant to follow the surfer but sure enough, he’d captured the perfect moment.

Hungry, thirsty, and now late for his own scheduled workday, Jones packs up to grab some tea and water before coming right back to the same spot.

“Besides, it’s Friday, and I just scored my favorite whale shot in a decade.”

And that’s when Luke Jones finally grabbed his board and got in the water that day.

Correction Appended: An earlier version of this story misstated the species of the whale photographed as a blue whale.

Have you captured a frame with an incredible story behind it? We’d love to hear from you. Feel free to send your image and any context (a paragraph or two is great) to contribute@theinertia.com, and we’ll have a look.