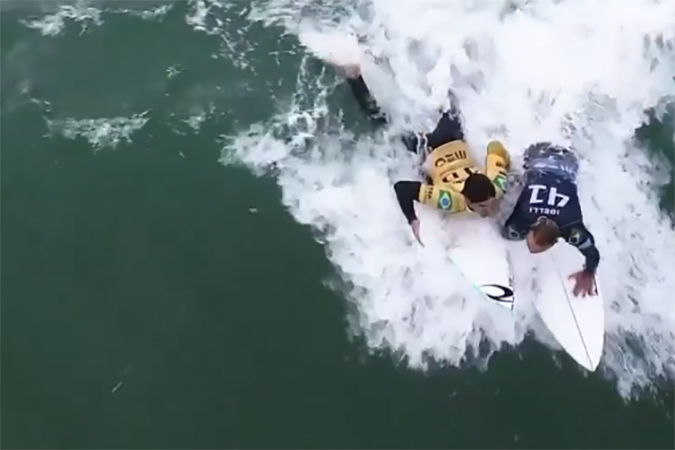 Neither surfer probably thought a four-foot wave would cause such a froth fest. Photo: WSL screenshot

This surfing thing is serious business. And if you had any doubt that it’s no longer about a few cross words at your local beachie, you need only take a look at the Instagram accounts of several of the WSL’s top Brazilian surfers. It’s now bloodsport, especially to fans.

Quick recap: This weekend, in a highly-contested heat – well, sort of, Gabriel Medina was firmly beating Caio Ibelli – Ibelli was given a controversial priority call when, in the eyes of the judges, he beat Medina back to the lineup after the two took off in opposite directions on the same wave. When Ibelli paddled for the next wave (with priority), Medina hassled – for a pitiful piece of swell in the grand scheme – drawing an interference call that cost him the heat.

Online riots ensued. In his quest for a third title (the race was headed to Pipeline, regardless) Medina posted a protest of sorts to Instagram, claiming he’d reached the lineup first, and it was apparently shared in different forms by some of his well-followed mainstream sports buddies. Suddenly, all of Brazilian sporting fandom seemed to come crashing down upon Ibelli like a sea of toxic frustration with Ibelli (who’s just trying to requalify) getting bombarded with nasty messages and comments.

“They can redo the heat and you can win in surf, if you lose in surf at least you will have earned our respect,” read one of the more tame comments – asking Ibelli to somehow re-do the heat, I’m guessing? “If you keep quiet, you will reap very bitter fruits, because the Brazilian fan is passionate, will never respect you and will chase you for the rest of your career for having been conniving and ruin(ing) the title of a compatriot.”

Yikes. Sounds grounded. I texted Caio to ask him why in the name of Ubatuba would Brazilians go after other Brazilians? He didn’t want to comment. But I will: I’m estimating that exactly half of those crazy comments and messages came from people who’ve probably never heard of “interference” in surfing before this week, given the mainstream exposure the hoopla created in South America.

Fellow Brazilian surfer Jadson Andre has since come to Caio’s defense, basically shaming Brazilian fans. “Guys, really, what you are doing with Caio, made me very (m)ad,” Jadson wrote (and we translated). “I love Medina, my relationship with Medina does not compare with Caio’s, nor will I get into this. But..Caio is not at all to blame! And he, like Medina, is chasing after his dream! In a totally extreme reality of each other! One to be world champion and the other to stay on the circuit where he is left out, his life changes from water to wine. I’m not (more) friendly with Caio than I am with Medina, but I’m really ashamed of what you are doing with Caio.”

It’s gotten pretty ugly with Ibelli’s wife, Alessa Quizon even weighing in: “It’s a shame that you got people from where you’re from shaming on you,” she wrote. “Where I’m from we support our people no matter the cause. Everyone’s chasing a dream and we don’t forget that at the end of the day they represent our hometown, our country. Both parties should be respected. Don’t hate on the athlete, hate on the game/the system.”

Speaking of hate, I hate to bury the lede here but the WSL finally responded to the controversy (after The Inertia ((me)) and probably every other outlet on Earth bombarded them with questions asking to clarify the situation):

. . 24 hours after a stunning interference call on World No. 1 @GabrielMedina at the #MEORipCurlPro, we have some clarity on what transpired. – @hunterjoness #wslsurfbreaks

For his part, Ibelli has put the controversy behind him (Medina hasn’t responded on social). “Today I woke up in the morning and, thank God, my inbox was very different from when I went to sleep,” he wrote.  “My family and I were sleepless and the attacks we received during that time were very sad, often by people who do not surf or are fans of the sport…It was very sad to see my mother like that reading the comments about her son. At no time did I want to cause interference or attempt to harm my opponent. I just followed what the judge and the board showed me and at that moment was trying to reverse the situation with my surf.”