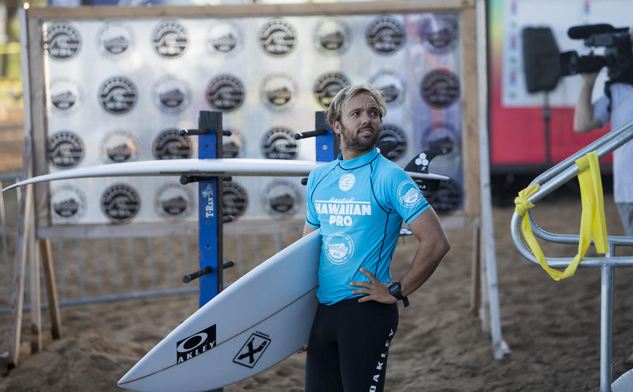 Caio Ibelli, one of the best athletes on the CT, is in danger of being left off the tour. Photo: WSL

Caio Ibelli is one of the most fun–and athletically gifted–surfers to watch on the Championship Tour. Unfortunately, we haven’t seen much of the Brazilian since April, when he broke his foot in a freesurf at Margaret River. In the months since, he’s been deep in rehab and nervously waiting as the WSL looks to address the giant elephant in its oversized room: aside from Caio, two other surfing behemoths have slogged through injuries this year, John John Florence and Kelly Slater. The situation has created a controversial logjam for the two available injury wildcards in 2019. Thanks to marginal conditions at the Billabong Pipe Masters this week, the WSL called a series of lay days. So I took the opportunity to catch up with Caio as he was going about his day and I was creeping around the event parking lot.

How’s the foot holding up?

I’ve been back surfing about two and a half months. It was very painful for the first month and hard to surf. The last month and a half, it’s been getting better. I’ve had good care, a lot of good doctors, I’m close to 100 percent. I had surgery June 6th for a Lisfranc and metatarsal fracture and had a screw put in my foot. Haleiwa was my first event, but Pipe is the big one. There’s a little pinch on my first couple waves each session, but it feels pretty good overall.

So talk to me about this wildcard situation.

I think honestly John John and Kelly are two legends of the sport. But at the same time, the WSL is a very serious institution. They definitely have a good panel of judges and commissioners and make the right decisions. I think they might find a creative way to put all of us in. I’m definitely fighting for the injury wildcard, I don’t want anything short of that. I think I deserve that. I gave my injury time to heal. Whatever Kelly did, some of his decisions (with his injury) weren’t very smart: he was going to Fiji, surfing on and off in some events. I think in the eyes of everyone, nobody was happy that he was playing the system a little bit. I think all of that is going to be taken into account in this situation. He is Kelly Slater. But once the WSL has judged the whole process I think they can forget about that and look at the facts: ‘okay, what did he do for his recovery? Is he doing the right thing and going through the right process, or is he being reckless?’ That should be taken into consideration. I trust the panel and hope they make the right call right.

Have you thought about what you might do if you don’t get the wildcard?

I’m not sure yet. Right now, we have one more week until the final call is made. I don’t want to think about what I’m going to do with my career. But this could end my career—to be really simple, my career would be over. So I don’t want to think much about that. The WSL, it’s a very serious association and they’re going to make the right call and address it. Me and Kelly will be on tour. I don’t know how, but they’ll figure out something to get everyone in and be honest about it.

John John’s injury might be more serious than we know, which would solve this whole thing if he can’t surf next season.

I’ve heard a few things. I don’t know what is true. John John should have to be the last one to worry about it. He isn’t playing around with his recovery. There are a lot of things going around and it’s been really frustrating staying on the North Shore; to be here early and everyone is talking about the wildcard situation. It’s a very bad situation for me to be in and I don’t have the answer. It hasn’t been easy. It’s been on my mind every single day. One thing that is great is all the support from the surfers. They have been pretty clear with what they see. There are things only we know and see and I have the support from the surfers who have an honest and fair perspective and view. It makes me feel a little better. They know what’s up.

You’re one of the more well-rounded athletes on tour. You’re pretty into kite surfing, right?

I wasn’t able to kite in Australia after I broke my foot, so I’ve been off the kite for a while. Maybe I’ll be able to give it a go while I’m here. Growing up in Brazil, I found myself sitting on the beach complaining about the wind. I couldn’t figure out how to have fun on windy days when all the kite surfers would take over. So instead of getting run over by them or finding a way to kick them out (there was too many to kick out, ha!), I decided to join them and I fell in love with it. I love to surf, and I don’t want to be out of the water when it’s windy. I love the speed and to chase the waves with a kite. It’s another way to connect to the ocean and I love that connection.

Ever thought about doing one of the world tour events in kiting?

I have so much fun when I kitesurf but I never thought about going on tour or anything like that. I kind of see a lot of things I don’t like with it: the rules and criteria and where they go and when it’s flat, they start judging freestyle airs. That’s not for me. It’s a pretty new sport and they haven’t figured out everything yet. With a world tour competition, whoever wins events wins like $3,000. You can hardly pay the plane ticket (or entry fee) with that. So, it’s not really a sport until the athletes can get a good paycheck to survive.

How’d all the months of downtime in California go?

It’s been good and it’s gone really quickly. I’d drive to doctor appointments twice a day. I had one doctor in San Diego and the other in Costa Mesa, so I’d spend all day long going from San Diego and Costa Mesa, stuck in traffic. I’d leave at seven in the morning and come back at seven in the afternoon. I kind of put myself there and made sure I had therapy going on. The weeks would go really quickly. By Sunday, I’d already be agitated and looking around the house. I’m one of those people who can’t sit still, looking out the window, just wanting to get out there and do something fun.

Ah, the commute. Sounds like you fit right in.

The waves are pretty below average. They’re fun in the summertime but there’s a lot of downtime between swells. But it’s close to Central America, you can go to Mexico, Nicaragua, El Salvador really quickly and cheaply. I love my routine there. I can go mountain biking, surf, go train, golf. I’ve definitely gotten used to the California lifestyle. And when the waves get good, I’m near the most rippable wave in the country. I’m down at Lowers all the time.