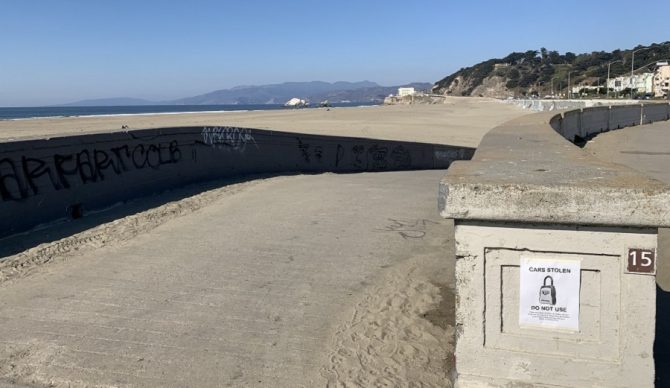 Looking north towards Kelly’s Cove, where many of the carjackings take place. Photo: Will Sileo

San Francisco, my current city of residence, is no stranger to car break-ins. In 2019, there was a break in every 22 minutes, according to the San Francisco Police Department. And while the pandemic has slowed the rate of such crime with 911 reported cases this October as opposed to 2,405 in October of 2019, local surfers are telling anyone who will listen that their cars are being specifically targeted by thieves in the area — and they’re not just taking phones and wallets.

“The car isn’t there,” wrote Reddit user Jonzer0 on the surfing forum. “I think I must have made a mistake. I run around like a madman. Finally, I see parts of my broken lockbox on the ground. Shit. This is really happening again.”  According to posts he made in the online community, he actually had his car stolen twice, once in Encinitas when he stashed his key in the bushes, the second time when he used a lockbox at Ocean Beach in San Francisco just a couple of weeks ago. 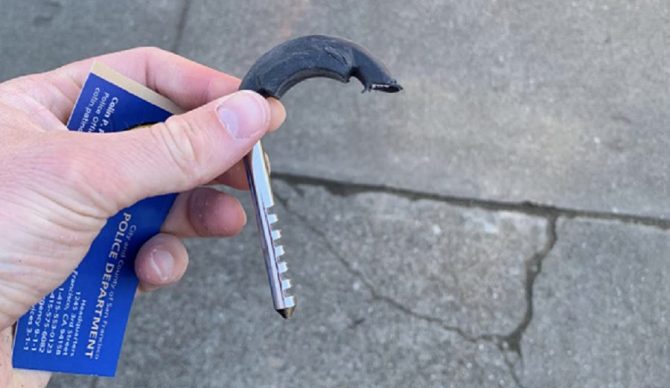 Not what you want to find instead of your car. Photo: Jonzer0 on Reddit’s r/surfing

He’s not the only one, either. From the people I’ve talked with either in the parking lots at OB or at the surf shop I work in, you get the sense that we’re under attack. It’s no surprise. As far as any demographic goes, surfers are pretty soft targets for thieves. We drive to a fairly centralized location (our local surf breaks), park our cars with our wallets, phones, extra surfboards, etc. inside, and then leave for hours on end.

The worry used to be that someone was going to smash a window and reach in to snag my wallet or phone, conveniently (and predictably) located in the center console. But nowadays fancy electric key fobs present a major security flaw for surfers. They’re difficult and risky to take into the water and they cost hundreds of dollars to replace if soaked. For those of us with detachable or nonelectric “valet keys,” there’s at least a partial solution: take the valet key and lock the electronic key fob in the car. But a savvy thief can still break in, find the fob, (or just hit that dumb push-to-start button), and take the entire car. I use a “Faraday bag” like this (which blocks wireless signals such as Bluetooth and radio) so at least a thief needs to find the keys before starting the car even though the two-plus hours I’m in the water for a longer session is still plenty of time to do so. 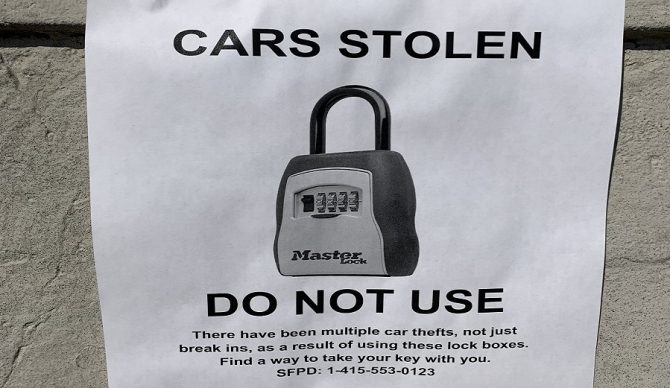 Good samaritans (and probably former carjacking victims themselves) trying to get the word out at Ocean Beach, San Francisco. Photo: Will Sileo

Many surfers have instead opted to use these sorts of gizmos (below), to securely store their keys outside of the car. Some of them even come with their own Faraday bags to keep proximity keys that can prevent keyless entry from opening the car. Problem solved right? Not so fast, for a couple of reasons. First of all, because doing so may void your car insurance as it doesn’t count as “remove[ing] all keys from within, on, or in the immediate vicinity of the vehicle while unattended.” And second, because thieves have caught up to modern security technology once again. Videos all over YouTube show how easy it can be to break into these “realtor locks” as they’re called. Just peep the video below where it takes about 20-30 seconds to decode the lock.

The message that I get from these videos and the recent spate of surfer-targeted carjackings is that the risks of leaving your keys, either in your car or outside of it, are simply not worth it. There are plenty of safe and reliable ways to take electronic keys into the water with you using water-proof devices. Stay tuned as I test three different waterproof key solutions in the next week or two, risking my electronic car keys so you don’t have to.