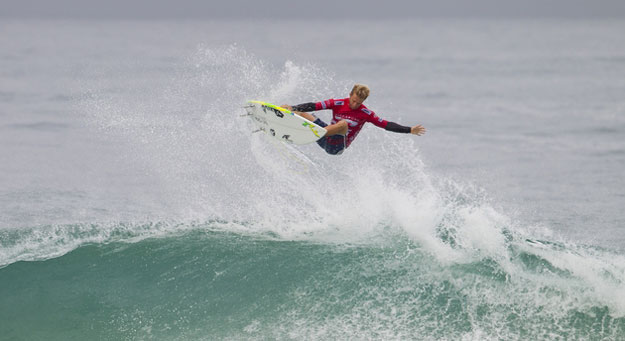 How about it, Kerr? El Rollo? Photo: ASP/Kristin

Performance surfing has taken to the air big time. Ten point rides are scored in high quality surf with one big, twisting air maneuver. The repertoire of what surfers can do on, in, and now above, waves has definitely increased.

But there is one maneuver that was born in psyche of the surfing community in the 1970’s that has not yet been achieved and seemingly forgotten. If it could be done it would blow minds, to use a seventies term, and it would win heats for sure.

It was featured in a Surfer Magazine ‘Tips on how to Surf’ article sometime in the seventies, if my memory serves me right. The writer described not how to do it, but how it might be done in the future. Rick Griffin would also feature it in his fantasy surfing cartoons.

I think a variation of it is being done today, and the variation takes people’s breath away, but the classic maneuver, so fantasized about, is still out there, uncompleted.

The variation / mongrel version, I’m referring to is really not the same at all. The first time it was seen in competition was in the quarterfinals of the 2007 Quiksilver Pro Gold Coast when Josh Kerr pulled it out of his bag of tricks in a controversial losing effort to Mick Fanning. Since then It has become more or less common in the repertoires of guys like Dane Reynolds and John John Florence. It’s a lesser variation of the forgotten maneuver: Dane will drive up the face into the breaking lip, and instead of a straight rollercoaster he somehow turns a vertical 360 inside the pitching lip and emerges out of the white water as if he’d simply done a re-entry. Some call it a nose pick.

As for the real thing, the forgotten thing, it’s called the El Rollo. It was never performed, only imagined. So here’s a challenge to the up and coming new breed of young surfers: Do one.

Here it is: A long, pitching, walling tubing wave. Imagine P Pass. You drop in and power-turn up and fast across the vertical long wall, moving at high power and high speed, stylishly crouching at an almost horizontal level as if you were riding a motorcycle wall of death. Your speed across the pitching wall along with centrifugal force keeps you stuck sideways to the face – and you smoothly don’t stop there. As you flash up the curving wall you go beyond the horizontal, into the upside-down vertical, riding inside the tube, along and inside the roof of the tube, ignoring gravity because of the speed and power with which you drove up, and into, and along the inside of the tube.

Of course you don’t stop there, but complete the loop, riding across the inner wall of the tube beyond vertical and still screaming down inside of and across the descending lip now, having left the wall of the wave completely behind.

You land back onto the wave face, as with a re-entry or rollercoaster, but this time inside of the white water impact zone, still inside the tube and just ahead of the foamball. Your momentum across the wave keeps you going and you ride out of the tube and along the waveface having completed the first ‘El Rollo’ inside the tube.

Of course it’s the impact point once you’ve gone over inside the tube that’s the problem – there’s the rub. How do you land with such speed and ride up again inside of the tube rather than slide and bounce sideways into the very impact zone where the lip hits the flats? If you can suss out that crux, you will be golden.

Any takers? Or was it just another generation’s fantasy? Could it be done at Teahupoo? Or Sunset? Or Pipe? Would a tube section of Trestles be better for it? Or Snapper? Or would it be possible if towed in sideways at speed?

Does any big surf company want to offer a major financial award for the first to do one on film on a wave head high or taller? [PS. I’d like some commission on that – you heard it here first].

The El Rollo: Dreamed about forty years ago. Another untouched frontier. Riding the inside wall of the pitched lip, instead of the wave, and coming out sideways with the spit! Cowabunga!