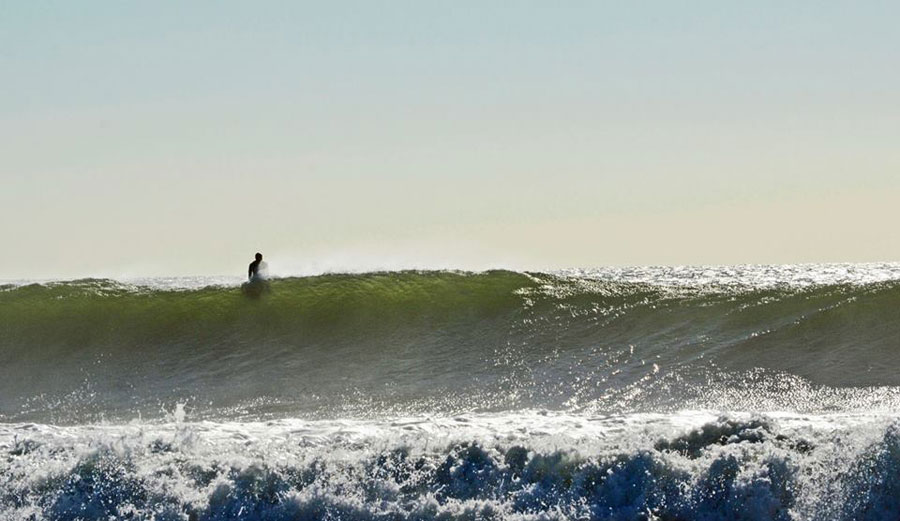 “I surfed for eight hours that day and caught a few waves that I hope to remember for the rest of my life.” Photo: Harold Wintters

“You can surf in New Jersey?”

I get these questions all the time when people ask about my lifelong passion for Garden State waves. Yes, we get waves. Good waves. But like everything worth chasing, the timing has to be right.

Everyone seems to have an opinion of the Jersey Shore, even if they’ve never visited. Most of the people who have been to New Jersey probably came to the Shore during summer, when the beaches are packed and the air reeks of Coppertone and body spray. Here, tourists bask in the reaffirmation of their long-held stereotypes. Is the sand cramped with orange-hued sunbathers? Yes. Are there d-bags who shave their stomachs and strut around with chests puffed out? Definitely. Are there waves? Most of the time, no.

The water is calm and clean and cools the hot skin. On summer mornings, the sea is a green glass sheet. While everyone tans on the beach and wades into the shallows, surfers linger around, waiting for something — anything — to happen. Even though it’s gorgeous and sunny out, surfers struggle through the summer months. But when a tropical storm charges up the Atlantic, everything changes.

Dedicated East Coasters spend most of our time surfing in thick wetsuits with hoods and booties, chasing winter and spring swells, when the surf is most consistent. The summer doldrums bring warm water, sure, but also waveless depression. When tropical storms kick off, however, East Coast surfers go into full focus mode, hoping and praying for the various stars to align, checking NOAA forecasts multiple times a day.

I was born and raised in the Jersey Shore town of Belmar, which hosts a small surf contest called the Belmar Pro. My family lived two blocks from the beach, and some of my fondest childhood memories involve walking to the beach with my Ma and watching tropical storm waves grind away at the sand bars, waiting desperately for the day I was old enough to charge them myself.

After bouncing around to Germany, Ukraine, Chicago, Texas, New York, I’ve finally “settled down” in Washington, DC. It’s become my adopted home, in part because it’s close enough to the coast that I can still chase waves. I don’t get barreled nearly as much as I want to, but I can stay sane by doing surgical storm strikes back to my home state.

To surf tropical storm waves requires planning, time and a healthy dose of dumb luck. If you’re married, like me, it also requires a supportive partner; someone who knows just how insanely miserable you get when you miss a tropical storm swell.

If you want to catch Jersey waves at their best, you can. It’s possible. It will be amazing. But you cannot have this experience on your own terms. The ocean is too big and powerful to care about your dwindling vacation days. The waves don’t give a damn how far you’ve traveled or how long it will be until the next time you can make it to the beach. You have to show up when the ocean is ready to show itself.

From its formation in mid-August of 2014, Tropical Storm Cristobal looked like a fighter. The storm moved slowly as it passed Puerto Rico and the Dominican, dumping loads of rain, drawing energy from the warm waters and strengthening as it crawled north. Five days off, the storm was projected to stay well offshore. This was good news for surfers because it meant clean waves. It was good for the entire Shore community because they wouldn’t get all their shit destroyed.

Thursday, August 29, 2014, was Cristobal’s solo performance. I cleared my work schedule on Monday, took Thursday off and planned out my trek with Harold Wintters, a friend, neighbor and amateur surf photographer. We left DC at about 7:30 Wednesday night, hoping to spend as little time as possible stuck in traffic. The Labor Day rubbernecking hadn’t yet begun, and we reached the Jersey Shore a little under four hours.

We arrived at my sister’s house and were greeted with hugs and an assortment of classic pre-surfing Jersey fare: stuffed shells, eggplant parm, baked manicotti. After years of personal experience, I’m convinced that carb-loading with Italian food is a vital component to hurricane surf preparation.

We opened several bottles of wine with dinner, of course, and we stayed up way too late drinking and laughing, considering we were going to hit the surf before sunrise. Harold and I set multiple alarms on our phones so one would ring every minute between 5:15 and 5:20 AM. Dazed but stoked out of our minds, we drove the Garden State Parkway in the pre-dawn haze. We got off and cruised eastward, taking in the scent of sea breeze, the anticipation growing with each block closer to the ocean.

At a block away, I caught my first glimpse of Cristobal — the crest of a large set wave rising above the boardwalk. The offshore wind caught the wave’s lip and sent a long line of spray into the air. Harold parked the car, and I took off across Ocean Avenue and with my board bag strapped over my shoulder.

I jumped up onto the boardwalk, looked out over the sea and felt a fist clench my gut. The ocean was ripped with lines, big ones, pounding one after the other after the other. We had arrived at the perfect time, near the peak of the 10-foot swell.

The sun was peeking out and warming us up while the wind was blowing offshore, catching the waves and carving them into shape. Cristobal was far out to sea, spinning his way east-northeast toward the North Atlantic. In a week’s time, Cristobal would have some surf for France and England. But, at that moment, Jersey was the place to be. After months of waiting for waves and a solid week of planning, I had reached my destination: heaving Jersey waves.

As far as you could see, waves roared up and unloaded on the sand bars, sending white water exploding in every direction. Past the end of the rocky jetties, the waves would flare up and show thick, powerful barrels. The water was warm, but my muscles tightened up as I paddled out. When rushing to make it over the big set waves, the wind would spray skyward, which created mini rainbows in the early morning sun.

I surfed for eight hours that day and caught a few waves that I hope to remember for the rest of my life. I took a few serious beat-downs, and spent more time getting dragged around under water than I prefer, but that’s all part of the experience. All those days in the gym pay off big, because hurricane waves can beat the hell out of the human body. Even though I’ve surfed Jersey waves from many a named storm, the tremendous power of Mother Nature never ceases to amaze and inspire me.

It’s not all fun and games with tropical storms, though. Of course, there is the threat of landfall. Intense winds, heavy rains, storm surges, flooding, destroyed property, lost lives. Everyone is familiar with the destruction wrought by Hurricane Sandy, which was the largest and most extreme tropical storm to ever hit the Garden State. Sandy did send some massive waves to the Jersey Shore, but the swell was treacherous and overshadowed by looming destruction.

My hometown was one of many New Jersey communities rocked by Sandy. The boardwalk was swallowed up by the storm surge. The Belmar Pavilion — where just one month earlier my sister held her wedding reception — was reduced to a pile of splintered wood. Hurricanes have caused havoc for many of my friends, family and the larger Jersey Shore community. Time Magazine rated Ocean County, New Jersey as the most dangerous county to live when it comes to natural disasters. Five other coastal New Jersey areas, including my home of Monmouth County, ranked in the top 15, all because of the threat posed by tropical storms and hurricanes.

Even smaller hurricanes that don’t make landfall, like Cristobal, pose a significant threat to anyone who enters the water. I’ll pause here to channel my inner lifeguard: Please don’t enter the water unless: a) you absolutely know what you’re doing, b) you’re an incredible swimmer, and c) you have at least one other trustworthy person in the water with you to watch your back. Ocean rescue teams had to save numerous stranded swimmers from New Jersey beaches during Cristobal, including Belmar. A teenager died when pre-Cristobal rip tides swept him away from an unguarded beach at Sandy Hook. Further south, in Ocean City, a tourist was yanked out by a rip tide, caught inside by a big wave and drowned.

Still, these storms beckon many waveriders to New Jersey beaches for a chance to ride heavy waves, to witness Mother Nature’s best by immersing ourselves in her raw power. It’s what keeps me coming back, year after year, storm after storm.

We’re currently in the midst of the 2015 Atlantic tropical storm season, which is predicted to be less active than normal. While El Nino has positive connotations for SoCal surfers, here on the East Coast it’s associated with a less active tropical storm season. That said, I’ll be watching the tropics, hoping that all the elements line up for another memorable swell.

Isaac James Baker blogs about “Reading, Writing & Wine” and is the author of Broken Bones, a novel. Follow him on Twitter @IsaacJamesBaker.

Advertisement
Harold Wintters was born and raised in the Republic of Panama and is where his passion for waves, surfing and travel began. Now residing in Washington, DC, Harold spends his free time traveling, chasing waves and documenting the rawness of the ocean through the lens of his camera. Follow him @HaroldWintters.
View Comments