Check Out the Rippable Section on This Giant New Citywave in Lake Chelan, Washington

By this point, you’ve probably seen surfing on river waves, but have you ever heard of a Citywave? Citywave USA recently launched its first U.S. location at Lakeside Surf in Lake Chelan, Washington. Similar in concept to a standing river feature, the 50-foot wide endless wave is being called the “largest stationary wave in the world,” by its creators (let’s call it largest man-made stationary wave, check this).

Furthermore, the project is powered by 100 percent renewable energy. Citywave, the German company behind the project, has already constructed standing waves in over 13 different locations across Europe and Asia, including Munich, Madrid, and Tokyo. Their patented “deep water” technology allows the use of real surfboards with full-sized fins and the wave size and shape can be adjusted at the push of a button, catering to pros and Joes alike. 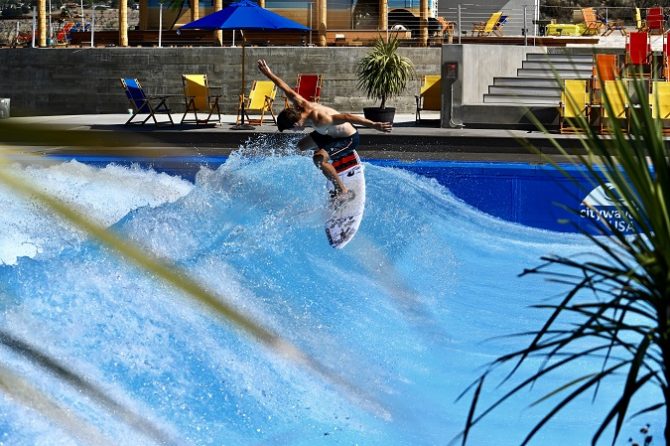 A surfer goes to the air at Citywave’s new Lake Chelan build.

River Waves, like the Eisbach in Germany, often employ submerged concrete slabs to help channel and focus the flow of the river into a standing wave, as well as upstream dams to control the flow of water. While probably the most “natural” of all the inland-wave options, they are also prone to the variability of nature with rivers producing different levels of flow at different times throughout the year, as well as the sketchiness of surfing right above a concrete slab where bodies and boards are easily dinged. This standing wave is similar in concept to Citywave’s technology, although improvements in that technology from Citywave have eliminated the concrete slab hazard, as well as the river variability. The new wave pool will open to the public in April, 2021 and will start taking reservations later this month.