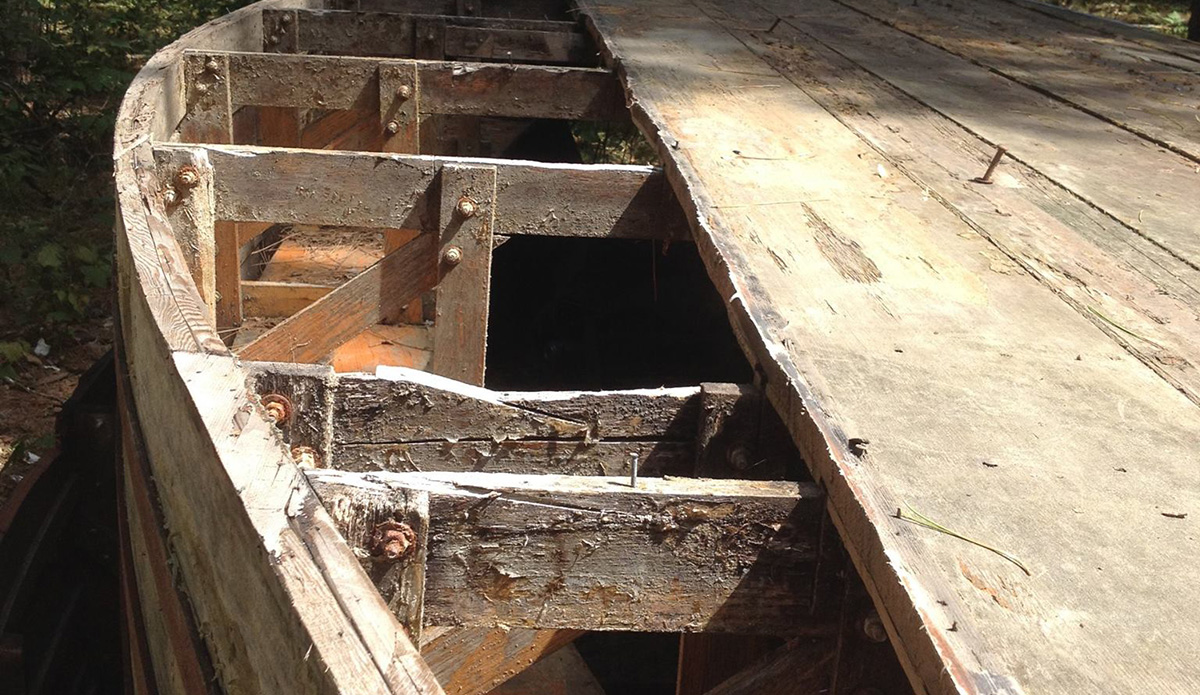 These sailboats were handmade at Camp Thunderbird in Minnesota in the 50s from old growth redwood—making it about 70 years old now. 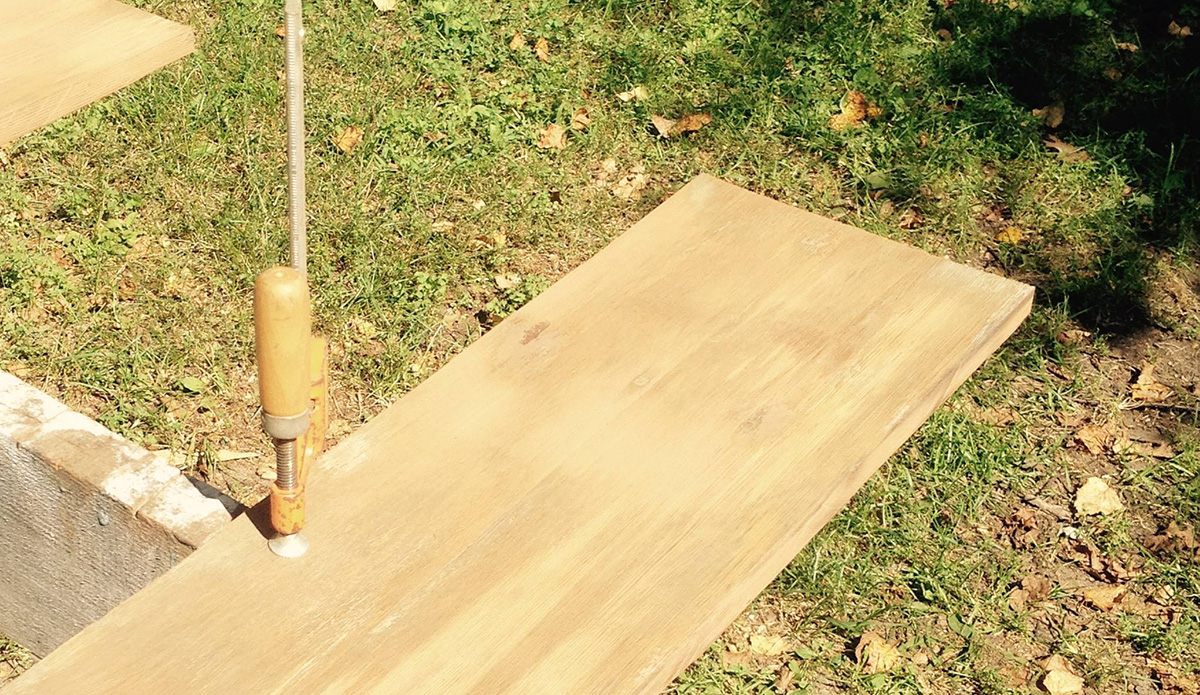 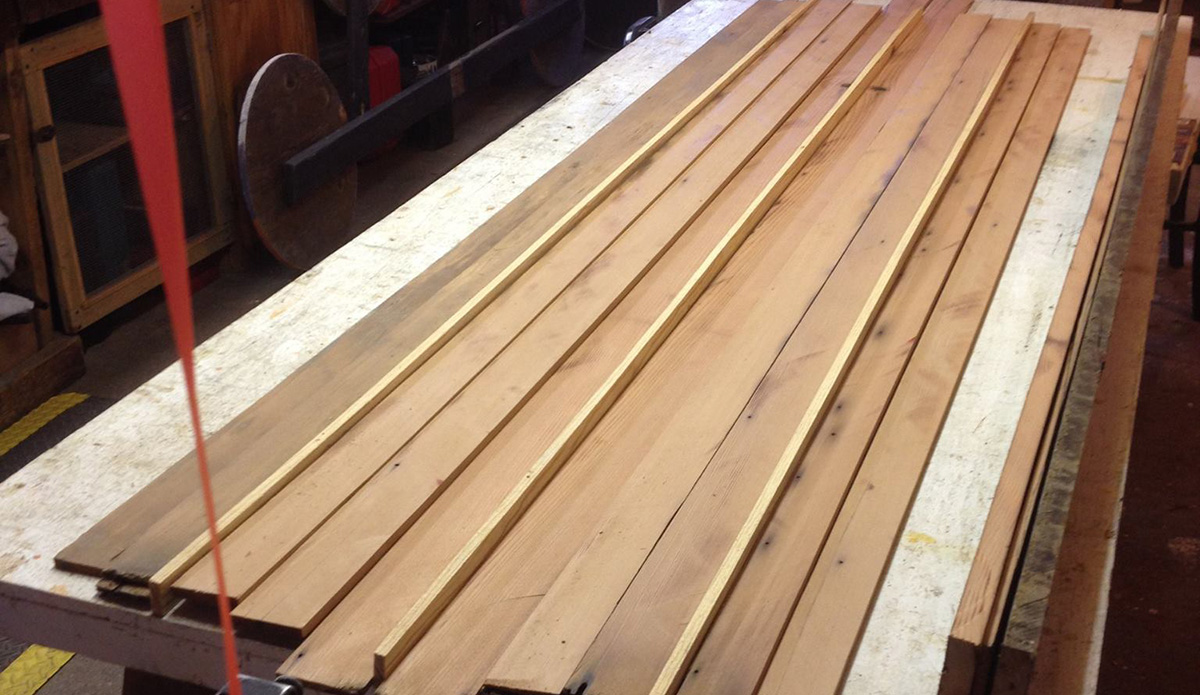 Once clean, planks were re-sawn on a table saw to get about 2 inch wide strips, then re-sawn again so that they were about a quarter inch thick. 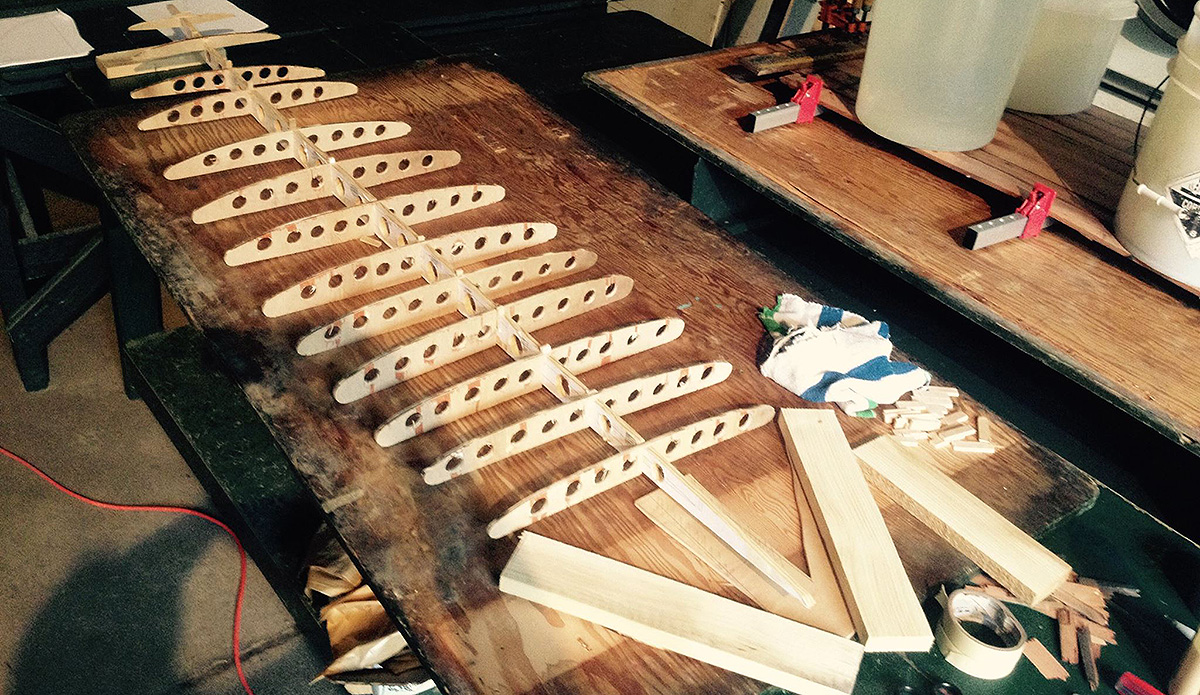 Meanwhile, the shape of the board comes from these ribs, cut from a template downloaded off the Web, printed to paper and glued to a plywood board. It's not easy to find free, effective templates. Your best bet is to buy one, from about $100, from pros such as www.grainsurfboards.com . I had to modify and tweak the downloaded design here, aiming for a 6'2'' single-fin that's very wide at 22'', for easy paddling and stability. 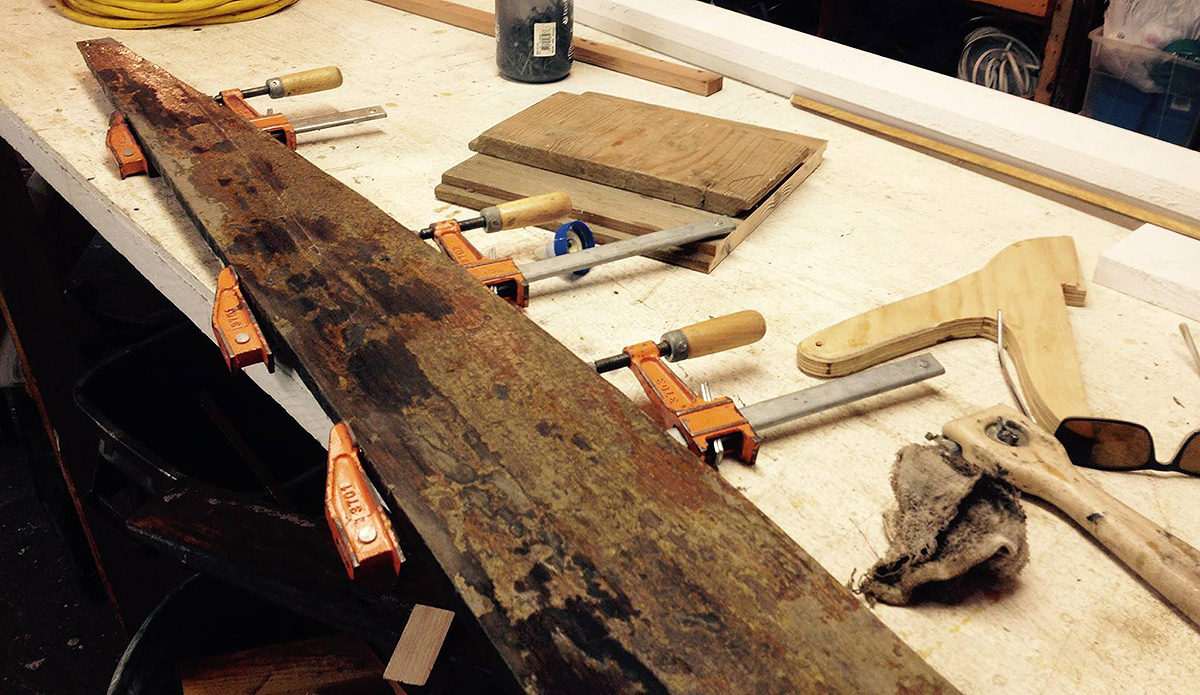 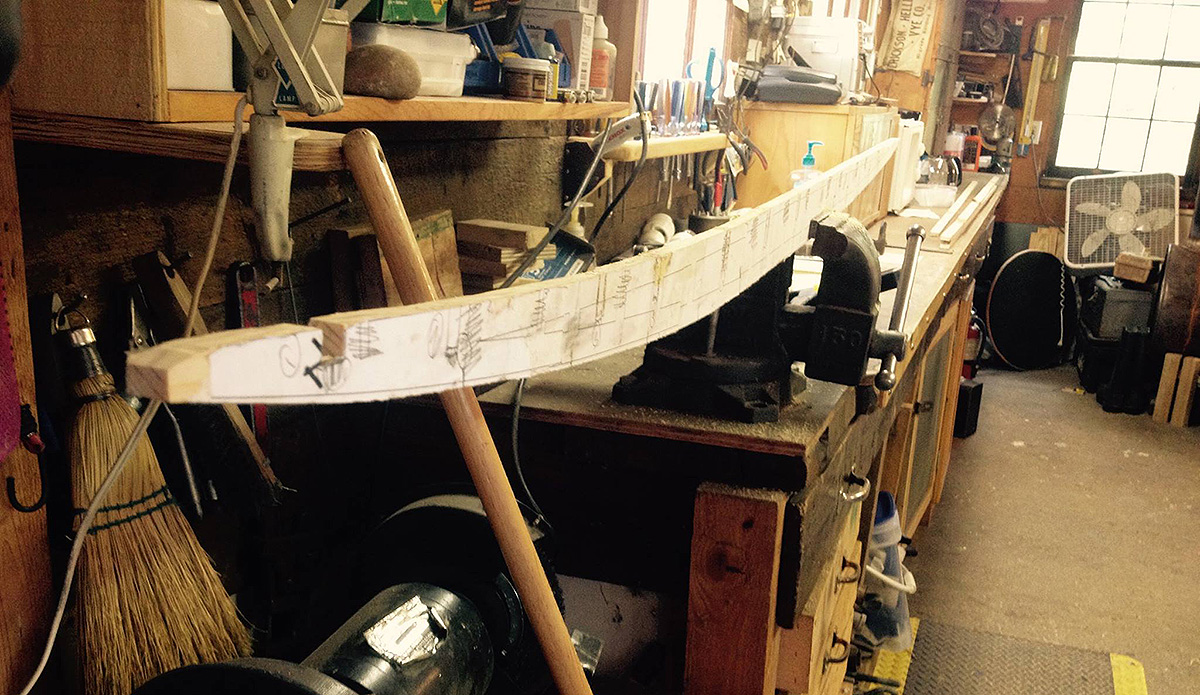 The stringer looks good, the final product, though, has less than desirable rocker. It came out very flat, making the board prone to nose-diving. A lesson learned for the next one. 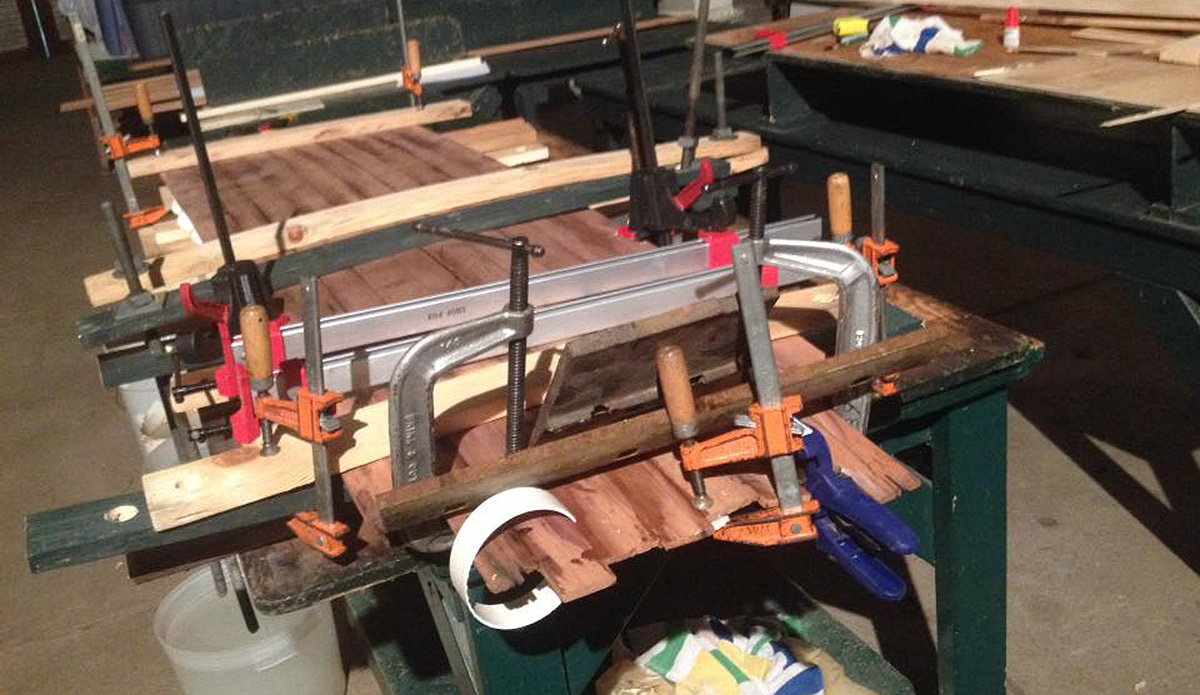 Clamping the deck and bottom to the skeleton by all means necessary—threaded rods, G-clamps, strips of PVC pipe, and later, those water bins on top. 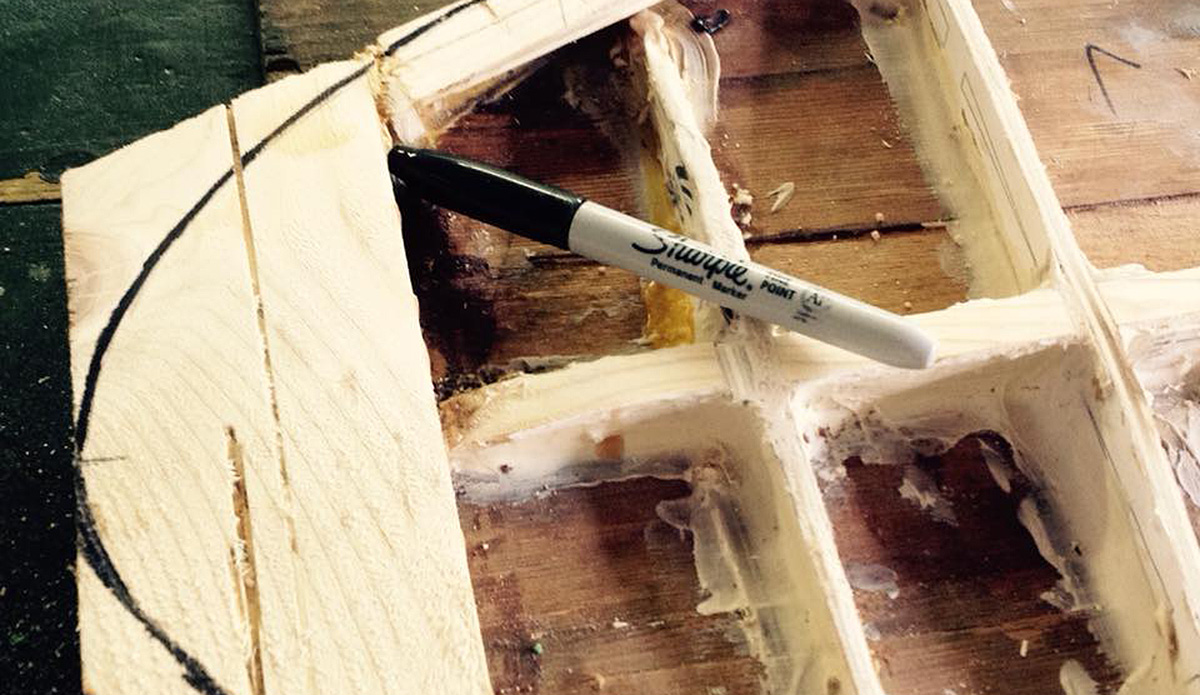 Detail showing the outline of the tail shape. I used strips and blocks of white pine and spruce for the tail and nose, also the rails. 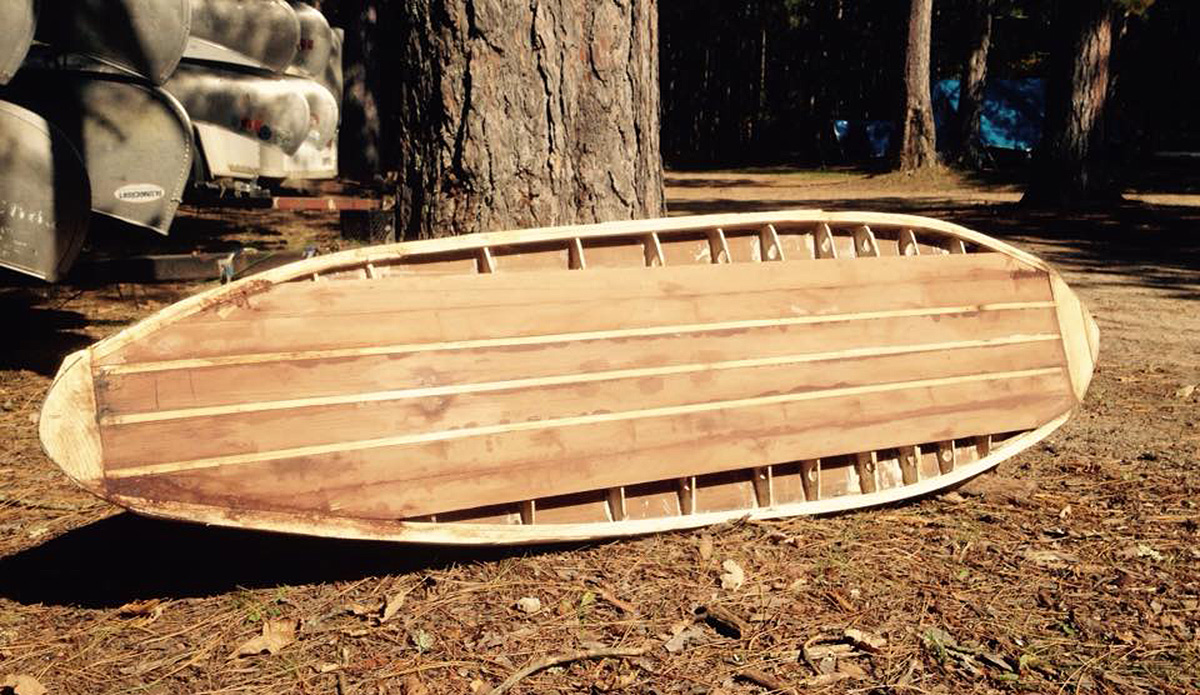 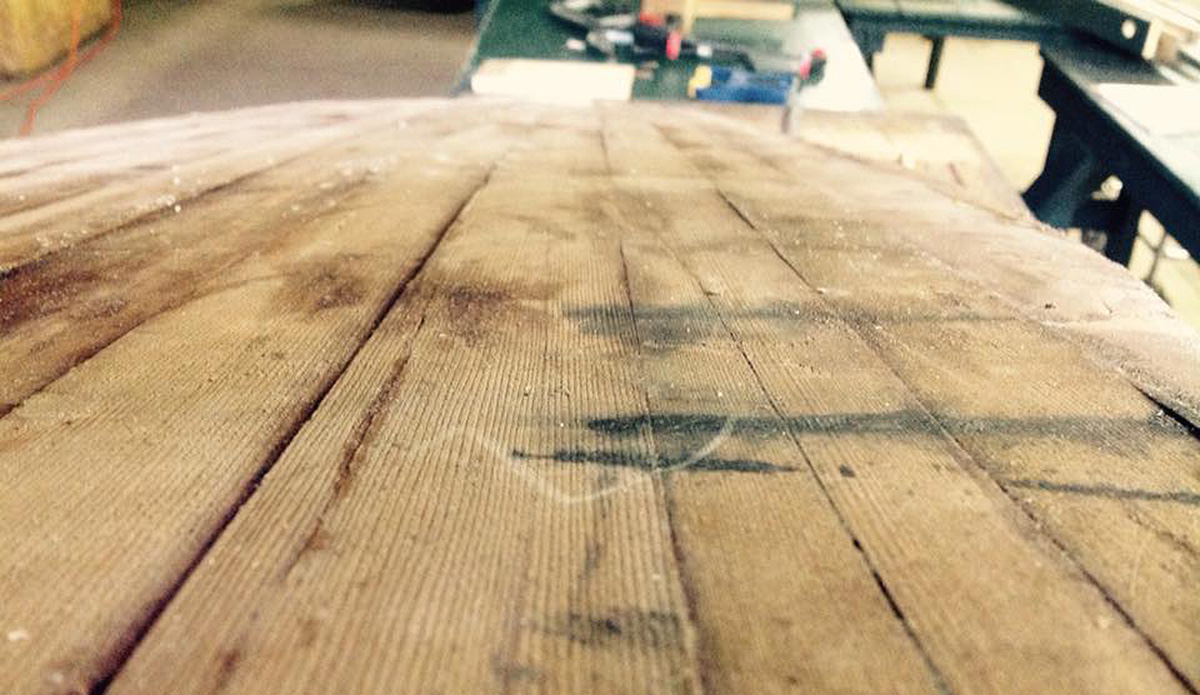 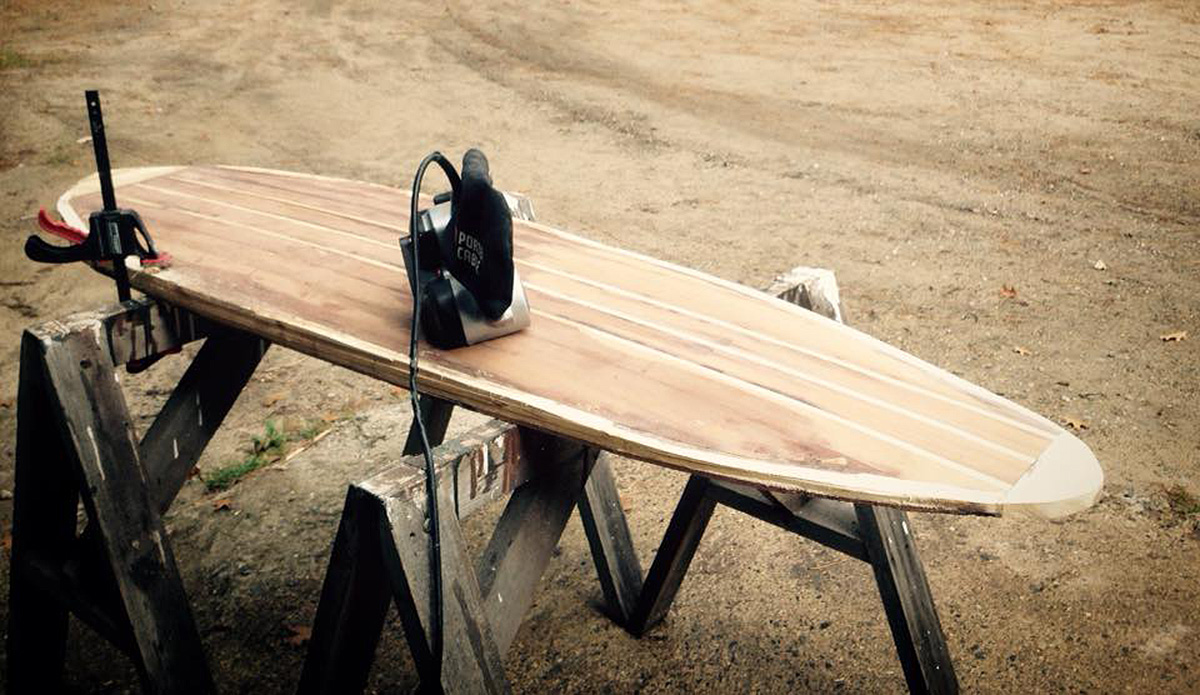 After many hours of belt and orbital sanding, especially shaping the rails, things start coming together. 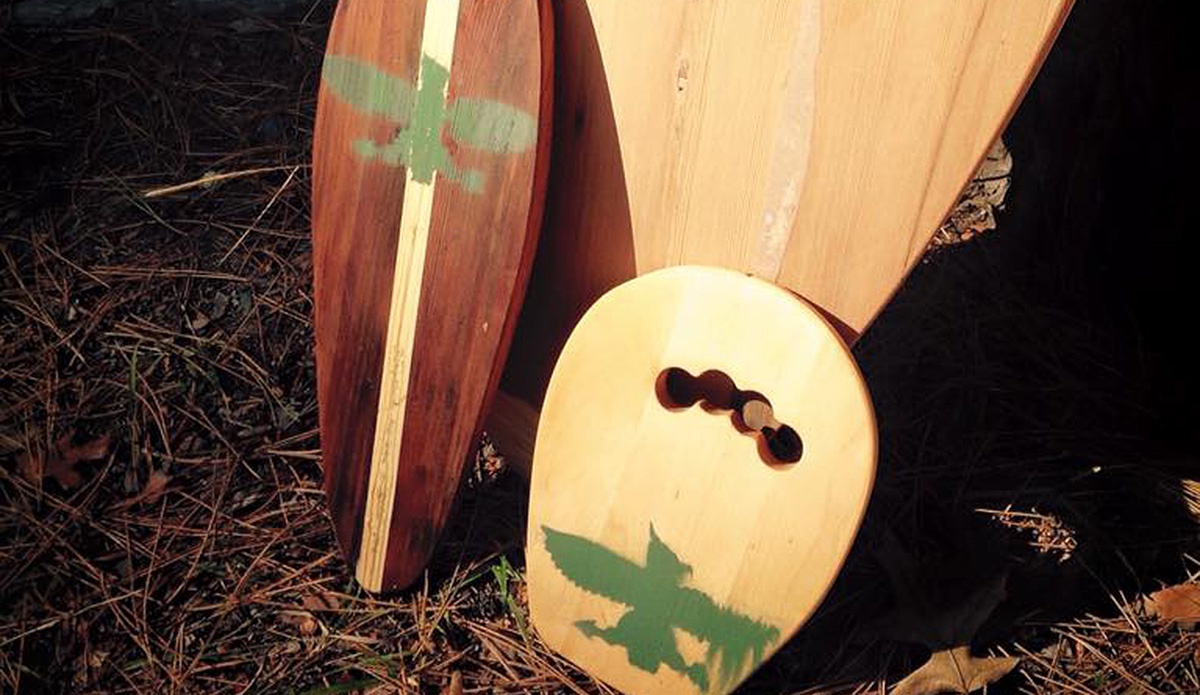 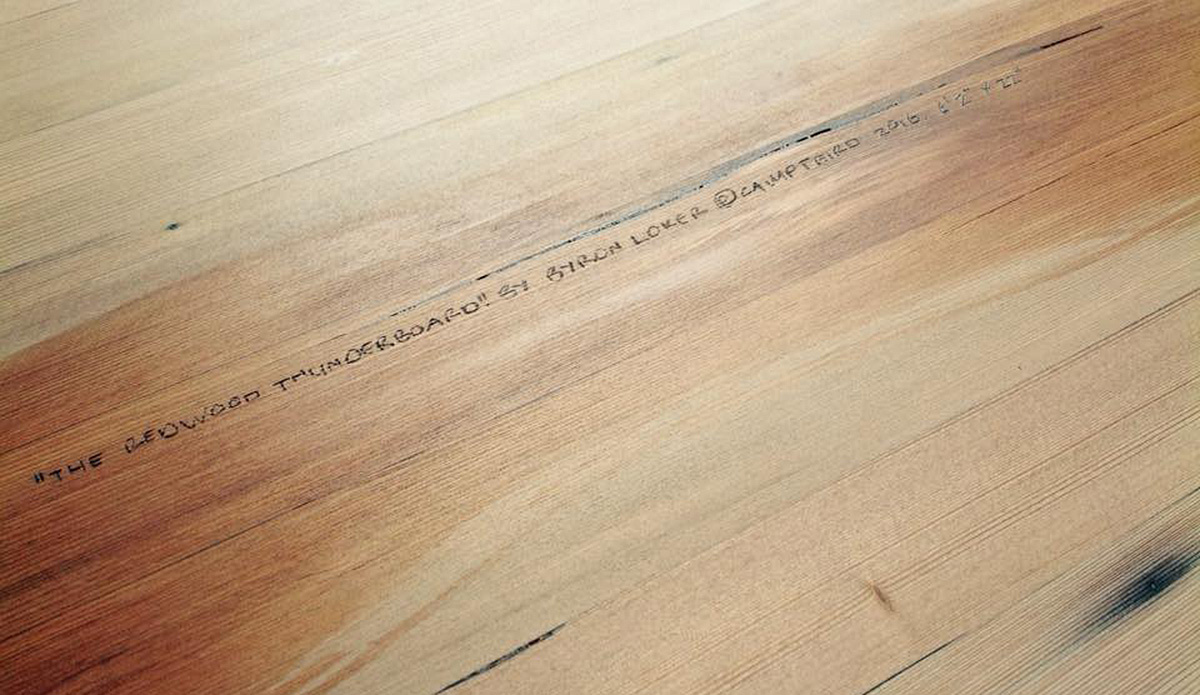 The all important maker's mark. This went through a few iterations before glassing. 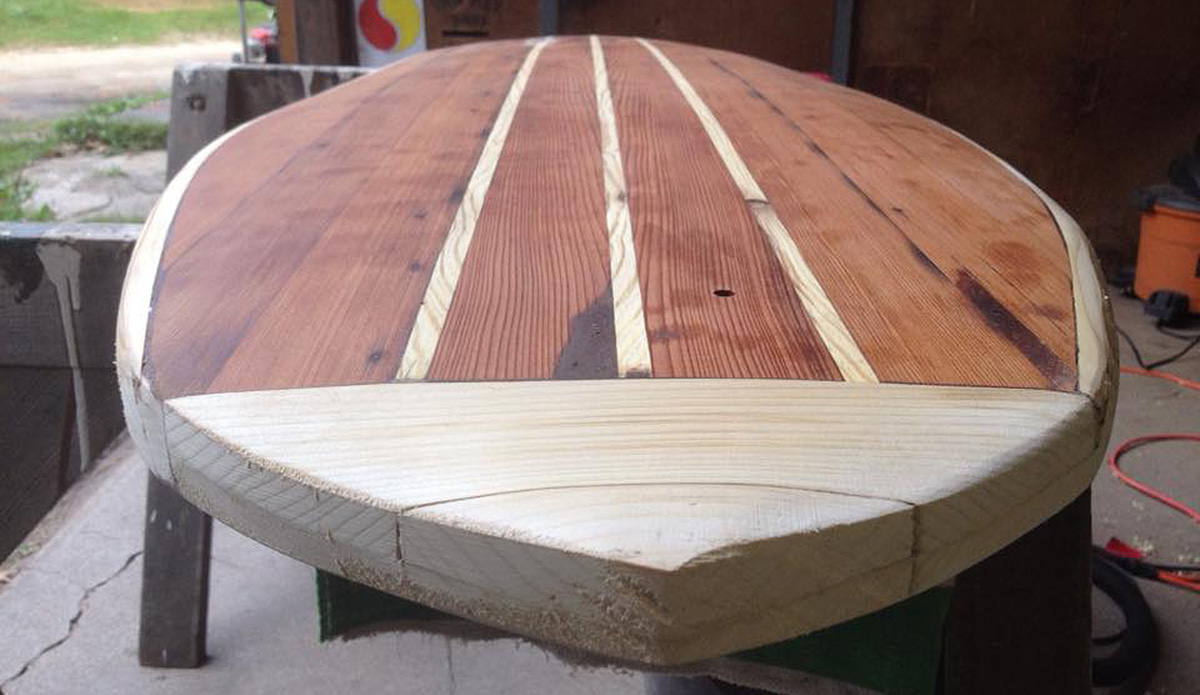 Before shaping the nose. The small hole in the deck allows for a screw-in plug later, necessary to vent air from the hollow core after each surf. Air trapped inside the board expands with heat, creating pressure. 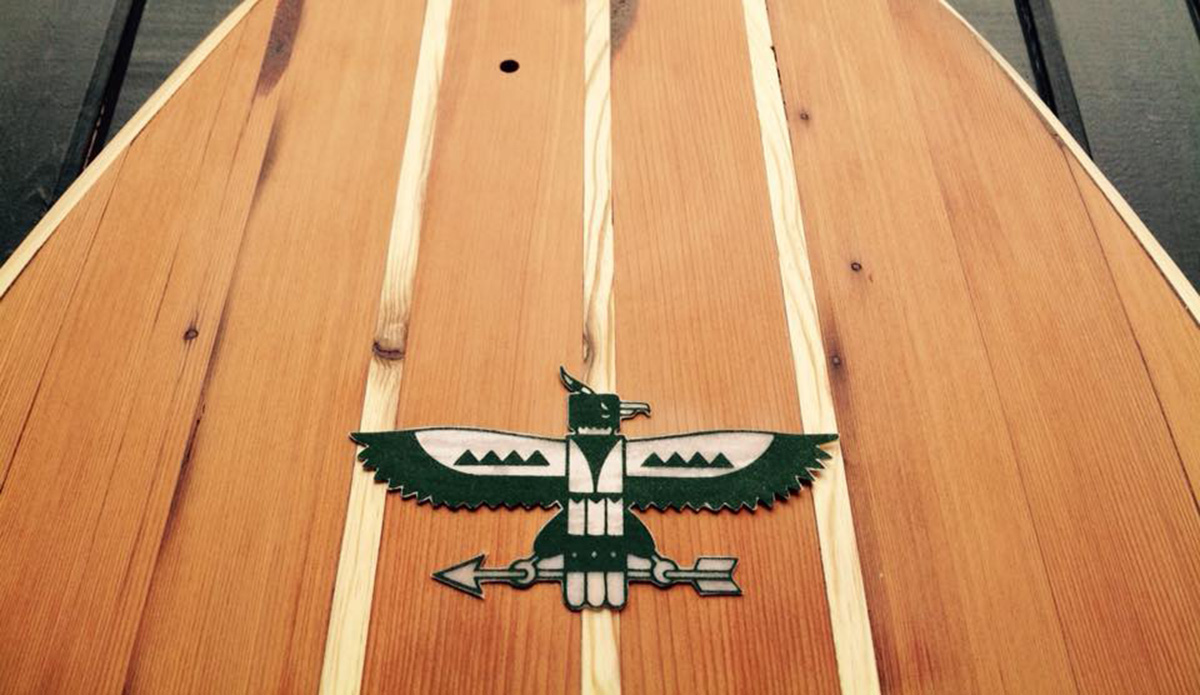 Shaped and ready for glassing. I didn't settle for the Thunderbird logo in the end. 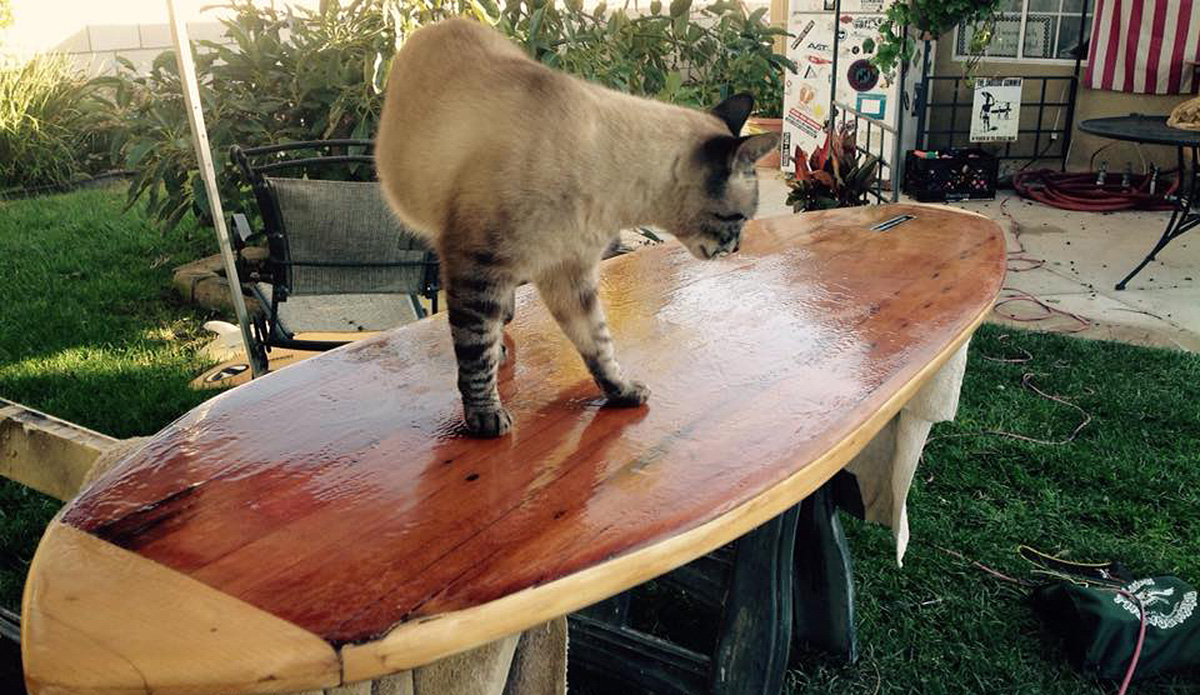 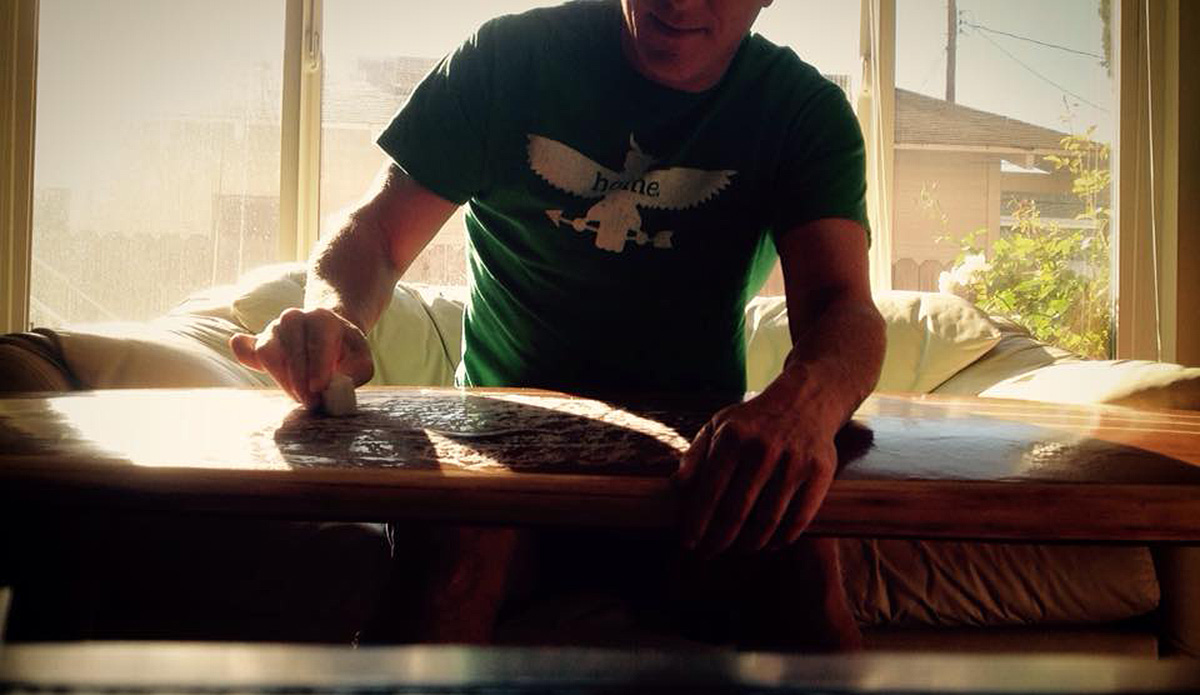 Waxing up in Long Beach. 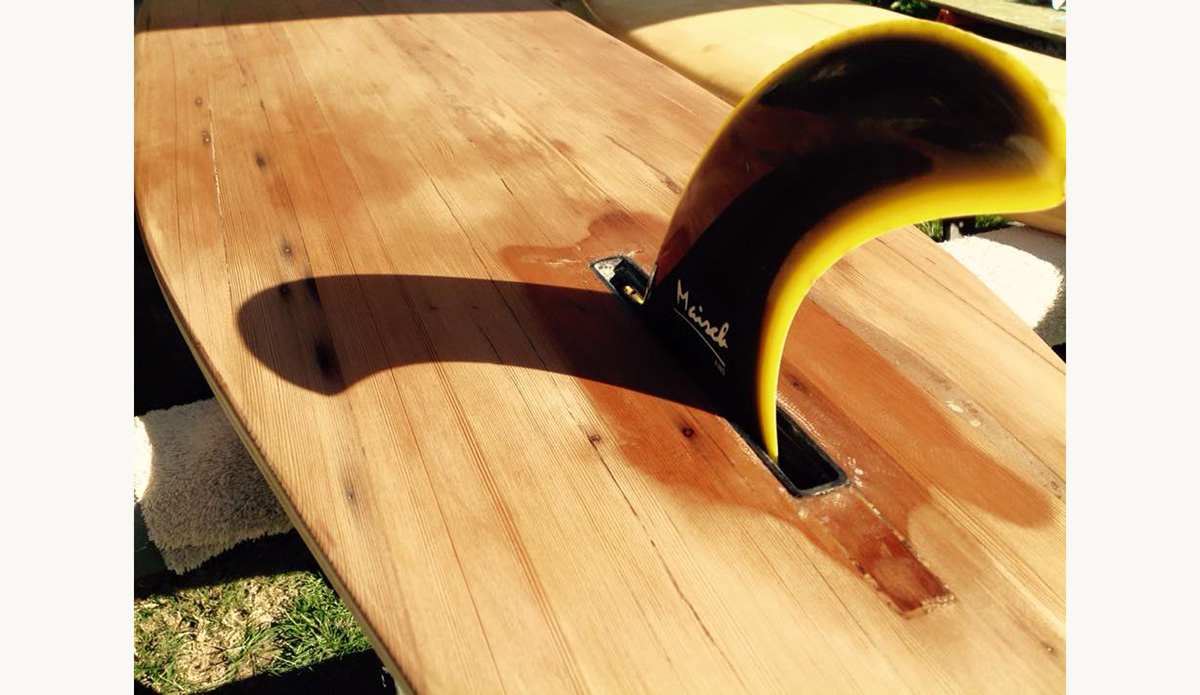 I set up shop in the backyard of friends Lisa and Donny in Newport Beach, CA for the next steps—fiberglassing. I was fortunate enough to enjoy a good 3 weeks of sunny skies and 70 degree heat. It's not ideal to glass outdoors, and proved a difficult process. The glass didn't quite dry properly and came out rather rough, but I was happy to finish up. This is a removable keel fin by Maisch that came along for the ride all the way from South Africa. 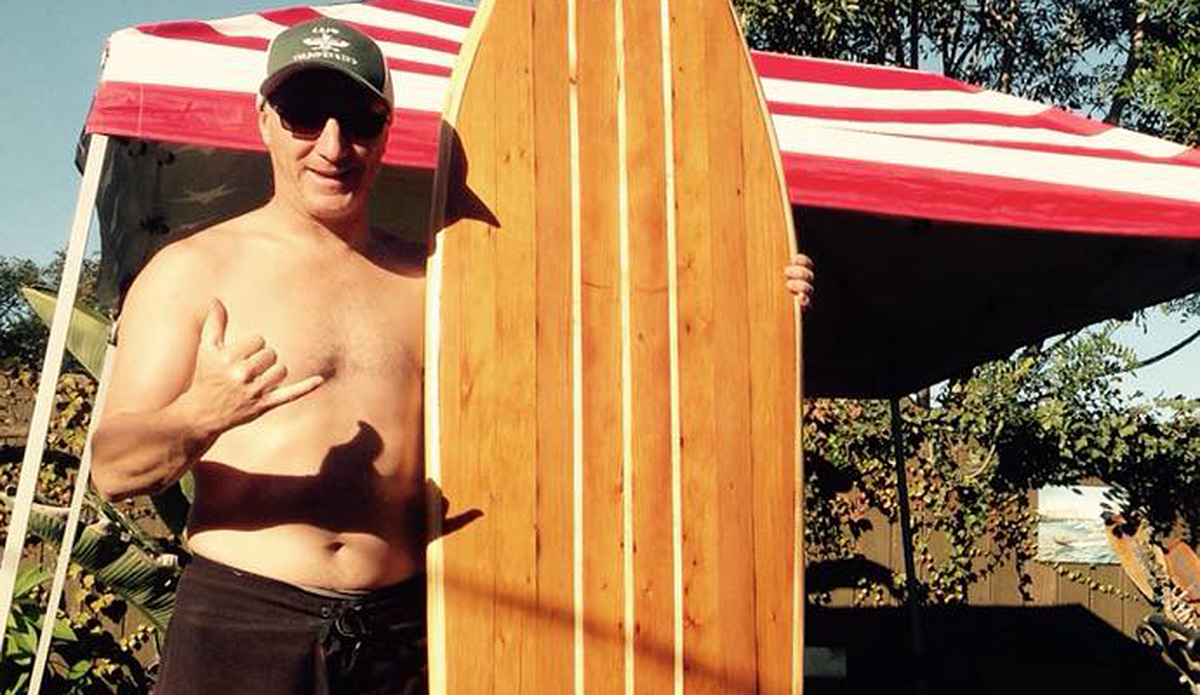 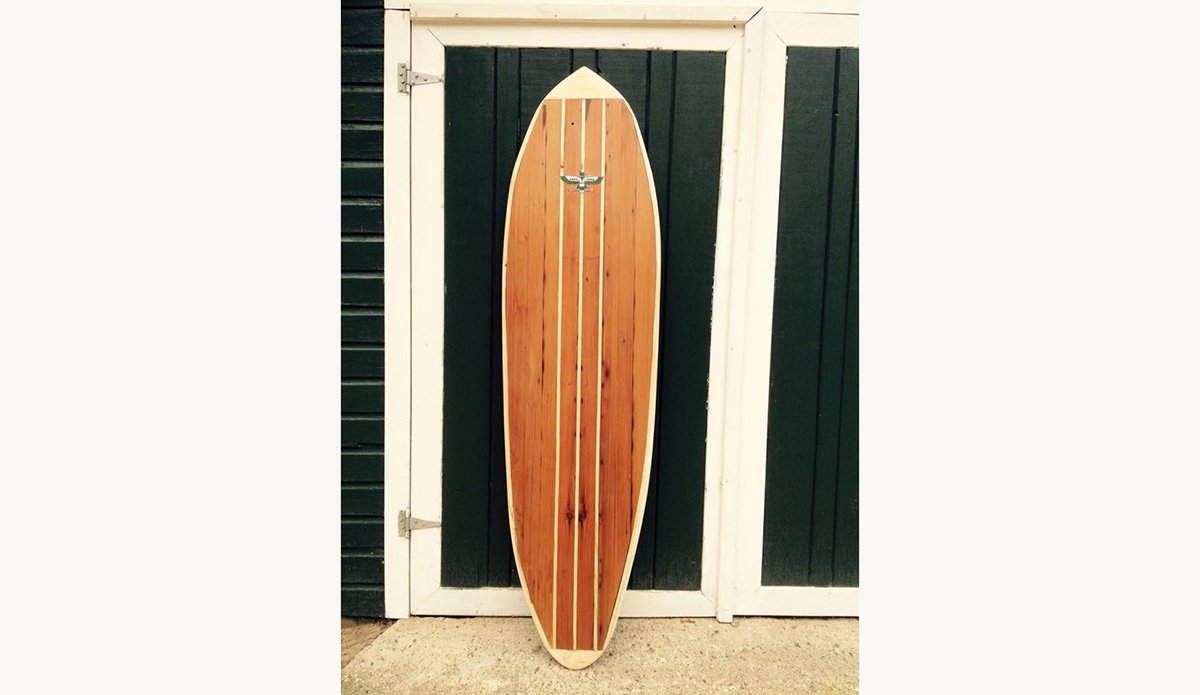 I have always wanted to build my own surfboard, inspired for years by the work of Grain Surfboards in Main, San Francisco’s Danny Hess, and my friend Patrick Burnett of Burnett Wood Surfboards in Cape Town, South Africa.

There are tons of plans, templates, and techniques available online these days for anybody wanting to take on the DIY project. However, I’d never found myself in the right set of circumstances to take on such an ambitious project. That was all until last summer when, after working as a videographer and photographer at Camp Thunderbird in Minnesota, I had the opportunity to start making “The Redwood Thunderboard”.

Bill Wilson, the maintenance manager of the camp, kindly gave me free reign in his perfectly equipped workshop and suggested I “harvest” the material for the project from discarded camp sailboats. The boats were handmade in the 1950s by then maintenance manager, Arnold. After toiling a few planks off the old boats with a claw hammer, crowbar and some cursing, I found that the wood was as clean and good as ever, even after over 70 years of weathering in the North Woods.

I set to work in the fall and it took about two months to get the basic form of the board together and finished before the harsh Northern winter set in and it was time to decamp to the sunnier climes of Southern California, where I was able to finish up with fiberglass and set my board to water. Here are some photographs illustrating the journey. As Grain perfectly put it, “We love building surfboards. The process, the tools, the material, all come together to give a great sense of satisfaction. It’s the process that we’re passionate about—a process that’s thoughtful—with sustainability, longevity, quality, and awesomeness built in.”