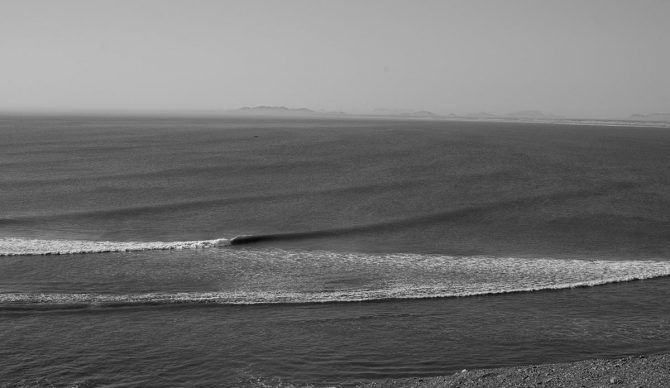 Anticipation for a surf trip builds like beer in a shaken tallboy and explodes. No matter how zonked you are from flights and shuttles, you’ll shake it all off, drop your luggage, and get right out for a surf.

Christmas Eve and waiting for prezzies doesn’t get me too jazzed anymore unless I’m buzzing on the vegan nog and hanging with family. Pre-surf trip jitters, however, will keep me up late with visions of grandeur. Getting ready for surfing the world’s longest left, Chicama in Peru, was a perfect example of that.

Chicama is so perfect it looks fake in photos, but she is real and hypnotic to watch, let alone surf. If you don’t get a proper welcome at the airport, the sharp rocks and scorching sand under bare feet are a pan flute’s whistle of bienvenido in its own way.

A half hour sticky and rocky walk to the Cape — one of four major sections to the wave — and her marvel sets in a bit.  We salivate over just how good the wave is when we turn the corner to see the Cape: chest high, offshore and in full production.  The brisk waters from the Humboldt current are an especially inviting relief after the hot and greasy walk with your wetsuit on. Water temps in the low 60s mean a 3/2 is the best bet but the local groms cruise in a tee and trunks, mostly because that’s all they have.

She was fickle and not as easily scraped into as those Google image searches will have you believe. You have to earn it like any other wave. Once in though, chest-high Chicama is the most anti-depressive thing I have ever experienced. As it is such a lengthy ride, you can really dial in on micro-adjustments in your form or just cruise and still have your mind blown.  Six-hundred meter long rides and stacking hypnotic lines that don’t section are forever etched in my head. Bliss begins to describe the feeling, but in the moment it manifests as a stupid smile that doesn’t go away.

We do the walk, surf, walk back conveyor belt happily for a day or two and then decide to go with the zodiac picking us up and dropping us off at the takeoff. The strong current makes for a relentless paddle, let alone staying in position for a wave. The boat became an appreciated luxury. True, the boat has no soul; its petrol leaves a stink in the air, its buzz can drown out the natural playlist of waves cracking, and the wake can run through the wave face if your driver is new or maybe doesn’t like you, but ours were tactical and took it seriously. So find some soul in that. I happily walked the first two days and several other sessions. I enjoyed that and I enjoyed the boat. I wasn’t above it. We laughed and marvelled together while in the boat and shooting the shit with the drivers. The boat drivers were stoked for us and would rip the wave apart on their time off.

One of the last sessions was at La Punta and our boat driver was surfing with us. At the beginning of the week, our first impressions of him were as a stoic presence in the boat, as he should be for a few reasons: a) He’s working and b) safety and a constant heightened awareness are crucial elements of his job. His credibility preceded—rumor had it that Laird Hamilton was impressed by his mastery of the zodiac when he visited town last year. At the end of the week, we got to know him a bit better and a sobering persona made way for passion and appreciation.

His name literally means “of the ocean” and he more than proved it during our stay. On our last session, while surfing with him, he was putting on a technical surfing clinic for us at La Punta. His dog watching from the not-so-far-off not-so-K9-friendly rocks, the two would bark and howl back and forth as only man and dog would.