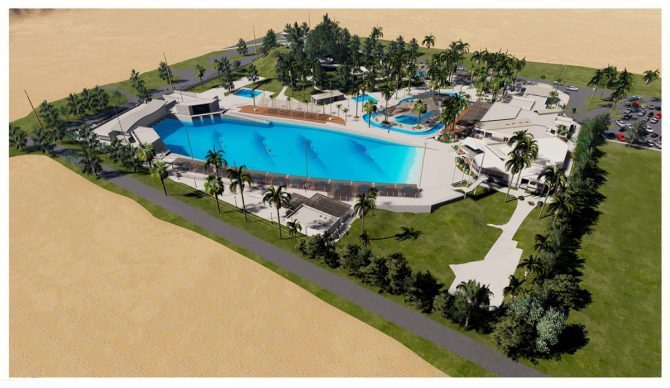 Palm Springs used to be all about golf in the desert and the occasional escape from Los Angeles to get your blackjack fix — a place with the warmest winter climate in the nation and actual triple-digit hell in summer. Sinatra used to hang here. And anything Frank Sinatra appreciated is, by association, cool.

But nowadays, the Sonoran Desert/Coachella Valley city is more closely linked to Tupac cameos and an obscene number of Instagram photos taken in front of a giant Ferris wheel than Old Blue Eyes’ favorite non-Vegas hangouts.  Now they can add a new attraction to that travel brochure: a $50 million, 21-acre wave pool called the Palm Springs Surf Club.

Technically, it’s all been the works for a while now after Pono Acquisition Partners LLC. bought the site of Wet n Wild Palm Springs last year and Cheyne Magnusson and Kalani Robb started very-publicly sharing that they were the proud new owners of their very own wave pool. The big news now is that the local planning commission unanimously approved the development, paving the way for them to actually rebuild and remodel the old waterpark.

It was all a dream…so beyond grateful and proud to do this with such rad humans! Never let anyone tell you it’s not possible. Color outside the lines. Let’s go! #PSSC

Since they’re building the facility where an old waterpark already exists, a lot of the infrastructure is in place. But the planning committee still needed to vote and approve some details, debating potential issues like water use (you know, because it’s a wave pool in the desert) and noise pollution concerns. You imagine the locals want some peace and quiet after back-to-back April weeks of 20-somethings endlessly retelling how they just tried ecstasy for the first time during Rüfüs Du Sol’s set, followed by a third week of beer-guzzling partiers in designer cowboy hats listening to more country music in one weekend than they will the rest of the year. So the committee set plans to restrict the use of subwoofers to limit noise at PSSC, reviewed building materials and architecture by the city’s Architectural Advisory Committee and reviewed by planning department staff and an independent consultant.

According to Eric Munoz, the chief development officer on the project, they’ll actually be removing two of the existing rides from the waterpark, using less water than Wet n Wild Palm Springs did when it was open. When it’s all said and done, they’re now eyeing to open their doors to the public in late 2020.

“We’re going into an existing park, and we’re basically giving it an update as far as technology, safety, and wave quality,” Munoz told local news. “We aren’t loading up our real estate or our park with high-end homes or a big retail center or other land uses. We want to focus on the experience of enjoying water through the water park, our wave pool and through the restaurant and those are the main elements we are going to have,” he added.

Frank Sinatra didn’t surf. But he’d probably think a wave pool next door to his old estate is cool.