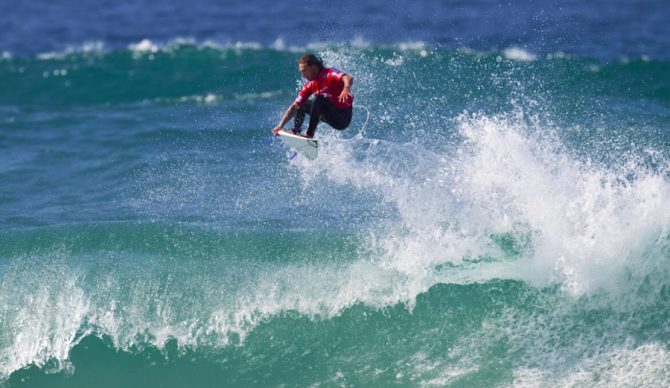 Chris Davidson, doing what he did. It was a sad weekend in the surfing world. Photo: World Surf League

Former Championship Tour surfer Chris Davidson was killed outside a bar in Australia this weekend. According to reports, Davidson was punched in the face after an argument with another patron, and when he was knocked to the ground he apparently hit his head on the pavement. He was unconscious when paramedics arrived and later died at a hospital in South West Rocks, New South Wales, a few hours north of Sydney.

According to authorities, a 42-year-old man was taken into custody and charged with assault causing death. It’s been reported that Grant Coleman, the brother of NSW Waratahs rugby coach Darren Coleman, was the man charged.

Davidson spent 2010 and 2011 on the CT, finishing 14th in 2010. His best result was a third in Portugal that year. “Lost another soldier yesterday. #RipChrisDavo. Had many a good battle with this guy,” Slater said on Instagram. “One of the most naturally talented surfers I ever knew.” Slater eliminated Davidson in that 2010 Portugal event but at 19, the wildly talented Davidson who grew up on the waves of North Narrabeen, rolled up to Bells Beach and beat Kelly Slater in the opening round, and again in the third, defeating Slater (in his prime) in two consecutive heats.

Davidson, while unbelievably gifted, had apparently had trouble with alcohol-related incidents before. He reportedly had several drunk-driving offenses and survived a 2016 crash where he ran into a telephone pole while intoxicated. But he was undeniably a good man and a good friend to many.

“Nobody wins. It’s just the worst thing ever,” his friend, Nathan Hedge said. “Not only has Chris been taken from us, the other person’s life is shattered and ruined as well. Nothing positive can come out of this. It’s the worst thing in the world. It’s got to stop. It’s not good enough. It’s just got to end.”