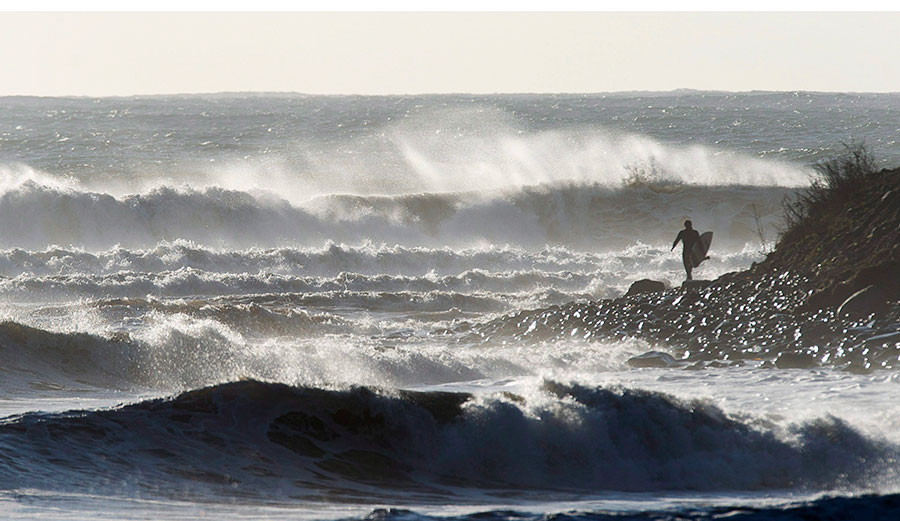 Humans have a deep and complex relationship with the sea. It provides food and essential nutrients, medicine, and renewable energy. People swim, surf, and scuba dive in this “blue gym.” It’s even an important part of therapeutic recreation, like surf therapy for war veterans and children with autism.

Economies are also bound to the ocean. Fishing, tourism, marine transportation, and shipping bring jobs, income, and food security while serving culture and other social determinants of health.

From our ancestors to our children, diverse human cultures, livelihoods, and ways of life flow to, and from, the sea. But rising greenhouse gas emissions are changing the ocean and putting our health at risk.

Marked by their swift and destructive power, natural disasters are becoming more extreme and more frequent with climate change.

For example, tropical cyclones (like hurricanes and typhoons), which have killed about 1.33 million people since the beginning of the 20th century, are getting more intense with warming ocean waters. The number of Category 4 and 5 hurricanes has increased 25 to 30 percent for each degree Celsius of human-induced global warming since the mid-1970s.

Storm surges, flooding, and physical trauma cause most fatalities and injuries. But in the wake of disaster, environmental and social conditions also threaten public health.

Stagnant water and damaged wastewater systems can expose people to toxins, bacteria, and viruses. Interruptions to health care and negative impacts on housing, employment, and other social determinants of health subject people to distressing conditions (such as crowded shelters and displacement) beyond the trauma of the event.

This can worsen a broad spectrum of public health issues — from infectious diseases (like cholera, leptospirosis, and diarrheal diseases) to non-communicable diseases (such as cardiovascular and respiratory conditions) to adverse mental health.

An increase in hospitalizations has been documented among disaster-affected populations weeks, months, and years later.

A well-studied example is Hurricane Katrina, which caused over 1,800 deaths in August 2005 from drowning, injury and physical trauma, but also led to an abrupt increase in heart conditions and serious mental illness. A decade later, persistent mental and cardiovascular health issues are among the reminders of the storm.

With the rise of global sea level, coastal flooding is becoming more common and severe. Another 250,000 square kilometers of coastal land is projected to flood by the end of the century, exposing tens of millions more people to risks. 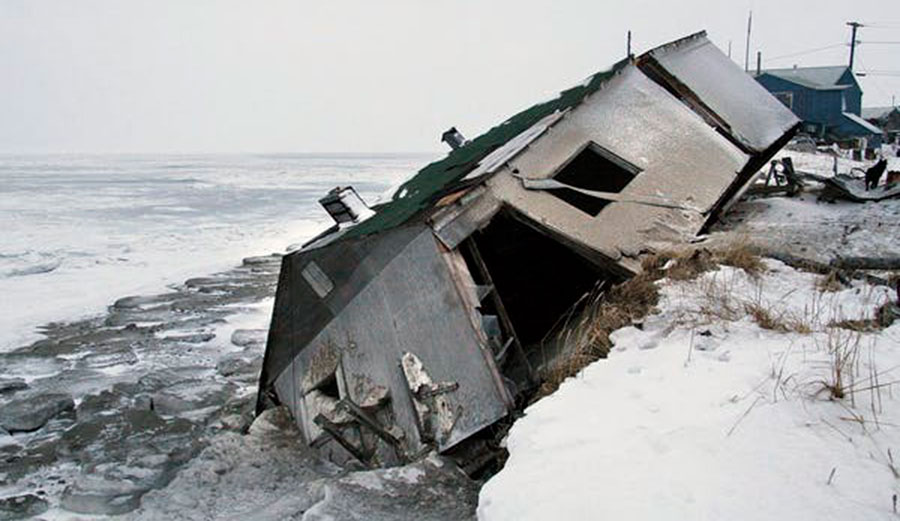 An abandoned house sits on a beach after a storm in Shishmaref, Alaska, in 2005. Residents voted to relocate in 2016 due to the severe coastal erosion. Photo: AP Photo/Diana Haecker

The health dimensions of climate-related migrations, especially among those who stay or are left behind, have not received enough attention in research and policy.

Over the past 40 years, Arctic sea ice has become smaller and thinner. Its overall extent has declined about 13 percent per decade, and its thickness has decreased by at least 1.75 meters.

A graph showing the downward trend in Arctic sea ice extent. Arctic sea ice reaches its minimum each September. September Arctic sea ice is now declining at a rate of 13.1 percent per decade, relative to the 1981 to 2010 average. Chart: (NSIDC/NASA)

Sea ice is a defining feature of life in the Arctic. It provides a platform for travel and harvesting activities and shapes ecological processes that are at the foundation of local cultures, economies, knowledge, and food systems.

The sea ice decline makes navigation more dangerous and less predictable. It can change the timing and location of harvests, increase harvesting costs and reduce how much is harvested.

Seafood is a key source of protein and essential nutrients, especially where they’re in short supply from other locally accessible foods.

But climate change is already driving species towards the North and South Poles. This may lead to serious declines in seafood catches by 2050 and negatively affect millions globally, with the most severe impacts in developing countries and among coastal Indigenous Peoples.

Projected declines of salmon and herring catches in British Columbia, for instance, may lead to inadequate intakes of several vitamins, minerals, and fatty acids for coastal First Nations. When diets shift to processed foods, high in calories and sodium, the risk of developing Type 2 diabetes and cardiovascular disease increase.

The ocean is polluted with mercury, industrial chemicals, pharmaceuticals, microplastics — and more. It also harbors many naturally occurring micro-organisms, like flesh-eating bacteria and cholera, and toxins.

These can become dangerous to human health when ocean chemistry and temperature, and other marine ecosystem dynamics, are altered, which can lead to shellfish poisoning, mercury exposure and poisoning and other illnesses.

Climate change will alter the distribution and severity of pollutants. For example, infections from some strains of vibrio bacteria may become more frequent and widespread with warming waters. Even rising methylmercury concentrations in tuna have been linked to increasing seawater temperature.

Despite the many connections between ocean health and human health, global ocean governance has rarely considered the latter. Policies like the U.S. Oceans and Human Health Act, and related research and training centers, can bolster the collaboration and coordination needed across diverse agencies, sectors, and disciplines to support healthy oceans and people.

This interdisciplinary infrastructure and capacity is needed to develop information (like early warning systems), policies, plans, and management systems to mitigate and respond to emerging public health threats from the ocean. We must broaden the framing of ocean change from an “environmental issue” to one that includes human health and social equity.

As the world turns to the ocean for “blue economies,” “blue spaces,” “blue health care” and “blue prescriptions,” it’s important to remember the ocean as a site of historic and enduring oppression, exclusion, racism, and other violations of human rights.

For the health of the ocean and its peoples, the ocean needs to become more equitable — and that means reconciling and healing the histories and relationships of cultures, values, and knowledge systems that all share the sea.