6 Confessions From a ‘Regular Joe’ Surfer 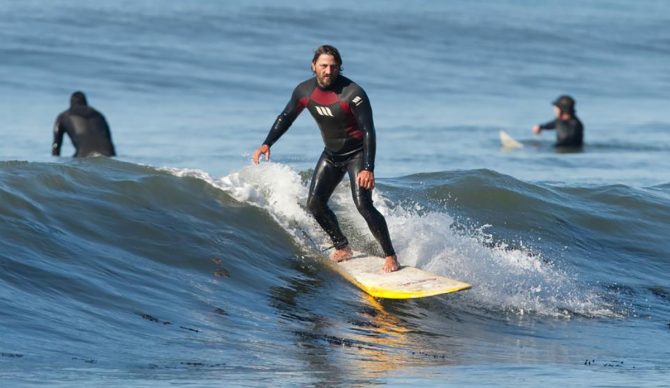 My first confession: I’m not that good. The author says what most surfers dare not. Image: Courtesy of Pat Pemberton

When I worked in the newspaper business, our corporate overlords always preached about how subscribers wanted to read about “People Like Me.”

I guess People magazine and every tabloid ever published had it all wrong. But whatever. I agree that regular people can absolutely be newsworthy – as long as they win the Powerball or murder someone.

I’m being a smartass. Truth is, when it comes to surf stories, I would actually like to read about more people like me. And, frankly, I identify much more with Dale Webster than John John Florence.

So, as a guide for fellow surf writers, here are some bullet points to prepare you for my profile:

Go ahead and laugh, punks. It wasn’t that long ago that I was the young one, and before I knew it, I was yapping about the benefits of a pension.

Meanwhile, the svelte, thin torso that once looked like an inverted pizza slice now looks more like a cereal box.

When I see those custom-made van stories, my first thought is, “How cool would that be?” I mean, you could wake up at the beach every day.

A different beach every day!

But after a surf sesh in 55-degree water, what I look forward to most is a long, warm bath. Picture the Dude, sitting in his tub, with candles burning and the sound of the whales piping in his headphones.

Not too many Econolines come with a tub.

3. I don’t travel the world for surf.

I don’t even know where the hell the Maldives are. And I don’t care because I’ll never go to the Maldives!

I’ve been surfing for 18 years, and my most exotic surf trip to date is Jacksonville, Florida. Sure, I’d love to surf that perfect wave in some faraway land, but remember earlier when I mentioned working in newspapers?

Maybe I’m overly pragmatic (or broke), but the debt any major trip would entail would seriously outlast the Stoke from said trip. Ergo, local only.

I’m not afraid to say it: Big waves scare me. And I don’t get a thrill from fear; I get fear from fear.

When I see that a huge swell is coming, I immediately think about that normally flat spot that only breaks on big days. Because, for me, choosing a rare three-footer over a 20-foot closeout is the survival side of surf Darwinism.

5. Sometimes I paddle in.

I’m gonna hear it from Shaun Tomson. But when he says surfers should always ride the last wave in, I know that he’s never had a real job.

Because if you’re surfing over your lunch break or before work, and you declare you’re going to ride the proverbial “One More,” that pretty much guarantees a 40-minute lull. And if you arrive to the office late, with wet hair, smelling like sardines, citing Shaun Tomson’s code – no matter how great — probably won’t carry much weight with the boss.

Maybe it’s because I grew up in the Midwest. Or because I have small, T-Rex arms. But after 18 years, I should be better.

Instead, I flounder on a shortboard. I bury the nose when I cross step. And I miss too many damn waves.

I’m not saying I’m Kookslams material, but I also won’t be getting that invite to the Surf Ranch anytime soon.

Unless, of course, I win the Powerball.