Confessions of an Over Waxer 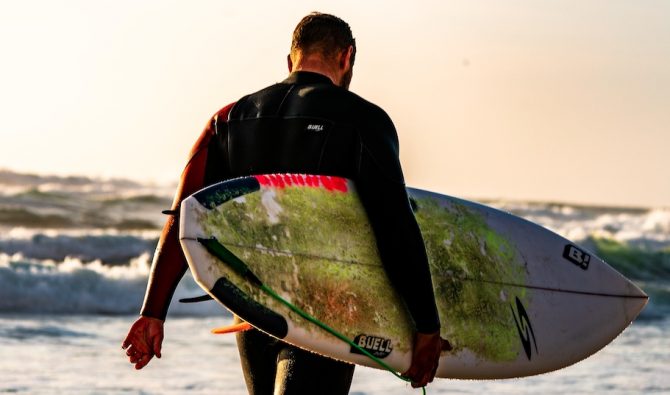 There are roughly four bars of wax applied to my board at all times. While I cannot confirm the official sales figures, I am 83 percent confident that I’m responsible for funding the college education of at least one Sticky Bumps executive’s kid. Okay, that’s an exaggeration – but I at least paid for a few textbooks.

I’m a devout follower of the teachings of Sticky Bumps, religiously slathering the stuff nose-to-tail, rail-to-rail before every session. While most surfers are fine with a light touch up or even an extra full coat, I feel the need to cover my board with gobs over and over again. Despite being well aware that there is already plenty of traction on the deck, the pull to continue piling on is too strong to overcome. A nervous tick.

That’s because each pre-session ritual is accompanied by the memories of good waves gone awry: feet that slipped off mid-turn, a drunken back foot incapable of finding the tail pad, and a slippery board that wants nothing more than to catapult itself free from my chest mid paddle. Each one of these thoughts prompts another vigorous coating in hopes I don’t embarrass myself by coming “unstuck.”

You may think I’m insane for living in constant fear of my surfboard suddenly transforming into a banana peel. I agree with you – it’s ridiculous. I frequently try to reason with myself, hoping I can navigate out of the psychological train wreck.

“You don’t need more wax,” I tell myself. “There’s already enough on this thing to supply a Yankee Candle factory. It’s nearly impossible to slip. You’ll be fine.”

Then, I touch a part of my board that feels slick.

I’ll scribble a little wax on there, just in case. A little wax is okay, right? It won’t hurt anyone.

But now that one part I waxed is way stickier than the rest of the board.

I’ll just even it out with another full coat. Or two. Maybe three. But only three. Just to be safe, you know? No risking another spill due to my own negligence.

By the end of this paranoia-fueled fiasco, my board now has an extra liter of volume.

Three words potentially hold the solution to my problem: Full Deck Traction. But I don’t think I’m a deck traction guy. It’s not really my style – and by not my style, I mean I’m not stomping full rotations. It would mislead others about my true surfing ability. The last thing I need is to invite a crippling bout of self-consciousness to my obsessive-compulsive party.

Even if I did remove wax from my life, it wouldn’t completely solve my problem. Surfing, like all sports, is comprised of many small actions that can make a massive impact. If I wasn’t hyper-focused on putting the right amount of wax on my board, I’d find something else to obsess over: proper foot placement, compression, or stopping my leash from coiling around me like a murderous python.

What I really need is a surfing psychologist. A Psycho Shredder, if you will, to help me discover that I possess the tools and abilities to overcome my excessive waxing tendencies. In order to move forward, I must first let go. Psycho would teach me that I need to use a metaphorical comb to remove the old, dark layers of wax from my past to make room for the newer, brighter ones. The over waxing may be a crutch I use to compensate for my flaws.

“And how does that make you feel?” Psycho will ask me after a particularly grueling therapy session.

“Like I’m always worried that something is slipping away from me. Like I’m one mistake away from losing everything,” I’ll reply, staring at the ceiling from the comfiest of couches.

And then, just as I begin to make a breakthrough, the session ends. Because that’s how therapy works.

But I can’t afford Psycho’s rates. Even if I could, he’ll probably be too busy trying to dissect Dane’s obsession with seal teeth or helping Filipe Toledo realize his potential in the big stuff. So, until the day comes when Psycho wants to discuss the mental deficiencies of the common surf folk, I’ll continue making it rain all over the Sticky Bumps display at my local surf shop. My board could use another coat.