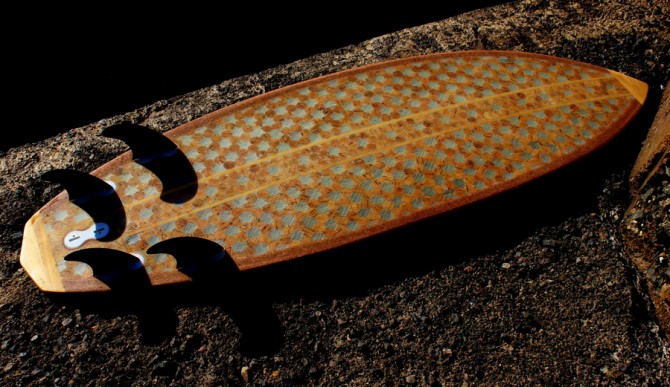 Is this the future? Photo: richpeoplethings.net

An innovation in surfboard manufacturing has taken place in a somewhat forgotten corner of Spain. It has something to do with wine, something that this southern European country is much more commonly known for worldwide, much more so than surfboards. Thus, thanks to richpeoplethings — how appropriate… — the saved corks from used wine bottles are being recycled into functional (and rather cool looking) surfboards.

In the southeast corner of the Iberian Peninsula lies a region named Murcia that is much more mundane than the better-known Mundaka, in the way of surf at least. While there are waves every once in a while, Murcia’s place on the surf map pales in comparison to the country’s swell-rich north coast. Murcia is actually best known as a Florida-like tourist hotspot with a sunny, warm climate. The region is also a major exporter of wine, fruits, and vegetables. Perhaps this lack of waves mixed with quality wine proved to be the perfect formula to help this renewable and environmentally-friendly construction of boards to sprout up.

The creativity and energy behind richpeoplethings comes from the brother and sister duo of Angel and Gloria Rodriguez Arnal. I was put onto this operation thanks to a tip from Thank You Surfing while looking for waves in the Mediterranean. (A special note should be made that their mother keeps this operation fueled as I was invited to lunches and dinners each time I stopped by their home and workshop. Viva Spanish hospitality!) Spanish feasts aside, the cork surfboards produced by team Rodriguez make a lot of sense for the majority of surfers just looking to have a good time out on the water; while it is accepted that foam and other materials used to make the vast majority of surfboards are neither environmentally friendly nor renewable, cork is a material that is harvested from trees, naturally durable and floats. While Doc’s recent exploration of a paper board is cool, it is not very viable. I would not want to even risk dinging a paper or cardboard surfboard. Given cork’s all-around positive properties, why not use some of the estimated 10+ billion wine corks in circulation yearly to construct surfboards, paddleboards, and whatever else we can think up?

Need more convincing of cork’s all-around positive properties?
1. It’s completely natural, recyclable and biodegradable.
2. It does not absorb water and therefore it does not rot.
3. It resists and absorbs impacts thank to the superb elasticity provided by the cell structure of the cork itself.
4. And the cork tree is one the trees with the biggest carbon dioxide absorption capacity.

Seems like a simple solution, right? Not so fast.

Making a board out of corks was only the first piece of the puzzle. Getting the thousands of corks needed to continue to construct these boards is another major challenge in and of itself. The good Spaniards at richpeoplethings are not winos in the least and actually play down the easily marketed wine-related aspect to their boards. Their world revolves around dreaming up better alternatives to some of mankind’s more destructive habits. Thankfully, Angel and Gloria have not only dreams, but the vision, execution, and perseverance needed to establish an all-important network of cork collection points with collaborators called Corkllectors. The network they have established by incessantly calling, visiting, and begging large consumers of wine now provides the recycled raw material needed to keep their operation afloat.

Years of experimenting and lobbying have not been easy. The time and financial investments needed have made it a rough go for Angel and Gloria. Fortunately, people who take dreams and convert them into reality are not impeded by such bumps in the road and the future is bright. The boards are now for sale to the public and phase two of other innovative surfboard design has commenced. The groundwork has been laid, why not get one of your own? You’ll be the envy of the lineup and can even hang it up as artwork on your wall when you’re not in the water. 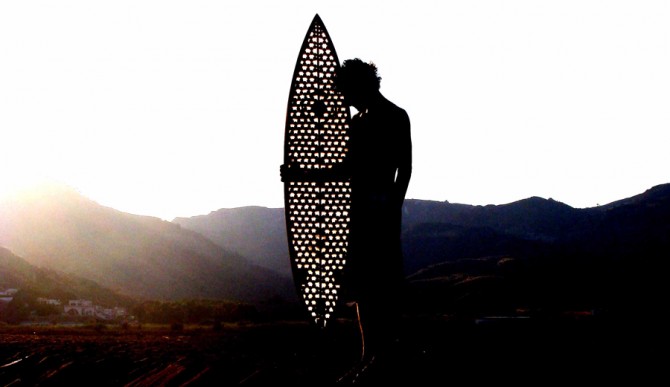 To learn more about cork surfboards, and inquiry about getting your own, check out richpeoplethings.net.