Could This All-Digital Contest Format Be the Future of Competitive Surfing? 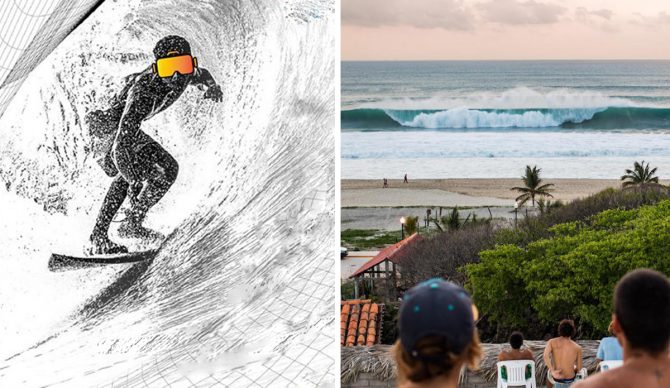 Gustavo Duccini has been promoting surfing in Oaxaca, Mexico for years. He’s worked with the local government to promote the coast as a surfing hotspot, organizing music and surf festivals in the area. He’s worked behind the scenes to help organize events at Puerto Escondido like the 2016-2017 Puerto Escondido Challenge, the 2018-2019 Puerto Escondido Cup, and several other contests in Mexico since 2009. Now, all of that experience is going into launching and promoting an entirely new way to look at competitive surfing in Surf Open League’s All-Digital Surf Web Series.

The Surf Web Series is an international online league that holds contests in which athletes can participate by submitting highlights, which are then judged as if they were a single wave within a traditional live, in-person heat. The unique format serves many functions, primarily getting fans to watch some exciting surfing, but also allowing athletes to compete in an innovative way, all while getting their sponsors some mileage and coverage from the competitors they support.

The format maintains the excitement of individuals competing directly with each other without the typical challenges of relying on the best conditions on a chosen day. By allowing each competitor to select their best video clips to use in their respective arsenal, fans get to see the best surfing on the best waves each chosen country has to offer. And for the competitors who have traditionally fallen victim to things like poor wave selection, priority rules, and the numerous rigors of contest surfing, there’s now a viable competitive format to showcase their best performances. And true to Gustavo’s work with promoting Oaxaca as a surf destination, the format also gives local tourism-dependent locations all over the world a chance to showcase the best conditions as well, enticing new would-be visitors in the process.

The Surf Web Series is a direct response to the current challenges competitive surfing has been presented by the COVID-19 pandemic. It promotes professional athletes who can’t put on jerseys and adapts to the new reality of indefinite contest cancellations all over the world. But at its core, the Surf Web Series is still about entertainment. Its format opens itself up to the next crop of rippers and underground chargers, giving them a shot at competitive success they might not have otherwise.

With location-specific web events scheduled for Chile and South Africa in July, the Surf Web Series will also have events highlighting Costa Rica, Brazil, Japan, the United States, Hawaii, and a global final planned for December to round out 2020. Meanwhile, the Surf Open League plans to announce a Big Wave Web Series, the Longboard Web Series, the Bodyboard Web Series, as well as a Women’s Divisions.

As mentioned, the contest format is fairly simple. Surfers can enter through the event’s channels, where 32 entrants will eventually compete online in what would otherwise be a traditional surfer-to-surfer heat format, entering one wave for each heat. Eligible rides for the new Chile event, for example, will be any freesurf waves captured in Chile between March 2019 to March 2020 — Chilean surfers competing digitally on Chilean waves. In South Africa, the footage can be any wave filmed in South Africa between March 25, 2019, and March 25, 2020, the day before the nation’s COVID-19 lockdowns began. Each clip is then viewed and judged via Instagram by a mix of local and international judges, as well as a public vote, just like the recent Surf Open Mexico, which saw voters crown Jafet Ramos over Kevin Meza in the final.

Editor’s Note: Surfers, sponsors, and videographers interested in participating in the Chile and South Africa events can email contact@surfwebseries.com