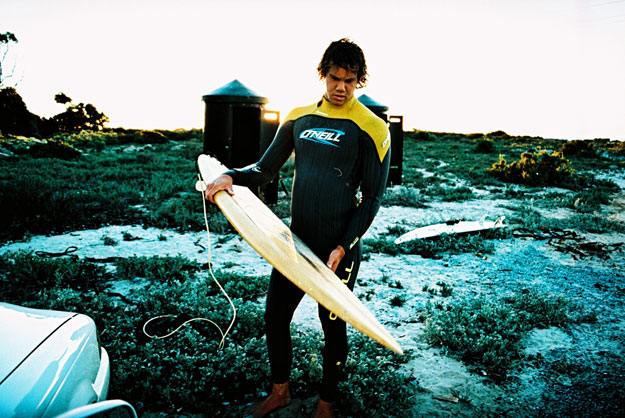 "Later, back on the beach, Jordy came over for a closer look at the board. 'It goes,' he said, giving it a quizzical look."

The first time I surfed with Jordy Smith, he snaked me. We happened to be sharing a session close to the pier at Huntington Beach, where I had lodged myself rather tenuously with an old flame—an American girl who had briefly lit up a Cape Town winter for me. I went on a wave that was clearly a left, albeit a short one, barreling towards the pier, while, using his contest smarts, Jordy paddled towards me as if to go right, forcing me to yield, before he switched direction, went left, and ripped the wave all the way down to the concrete. Hmph, I might have thought. Waves were in short supply given the over-amped crowd but, of course, it was no big deal, and not everyone gets to say they were snaked by Jordy Smith in Surf City USA.

A few weeks before I left to go and try to live in the United States for reasons not very clear to me or anyone else, I made what I thought very likely at the time my last trip to Elands Bay, a beloved place to me. A small crew we were that trip: two old mates, wives (two) and children (three). We camped, as we always have since our very first trip there circa 1988, at the campground down on the beach, in front of the hotel. We pitched our tents, made our campfires, drank the beer, told our old stories to the children, and settled in for the night, spirits buoyed by the nearby rumblings of fresh swell.

We woke early, looked to sea, walked to the point, checked the surf—nothing really doing yet—so we milled around the campsite, paid attention to the wives and children, thought about breakfast. Somewhere in all of that I looked to where I had left a bag of my gear on a fold-up chair, and noticed it was gone. I looked in the tents, the cars, looked again, searched my memory for it. There was no sign of it, so I let it be known around camp: “Anybody see my red bag?” Nope. Nobody remembered it being on the chair in the first place, so there were at first questions of memory loss, old age, dementia, that sort of thing. Once that was mostly out of the way, Pat had the best advice: “Let’s have one more search everywhere, make sure we’re not going to make idiots of ourselves, then go and report it to the police.”

After another thorough search it looked like I had a good chance of not making an idiot of myself, so I walked up the hill, around the hotel, and made myself known to the duty officer at the local charge office. I gave a statement about a missing red bag containing expensive surfing equipment and heard that there was a good chance a Constable Gqoli would pay the camp a visit in the near future for further investigation. It wasn’t long before he did, along with two colleagues, a lady cop and a junior male constable. They offered their sympathies, scouted the perimeter of the campsite for clues, and said they would check with the night-time security guard and get back to us after some police work.

On Pat’s advice I had a word with Constable Gqoli off the record and asked whether he could ask a few strategic questions around the nearby “township.” My gear would not go unnoticed: new Reef sandals (the Mick Fanning ones with the bottle opener in the sole that has not yet failed to impress at parties); Billabong long sleeve rash vest; hood; leashes; FCS fins; a few things I’d already forgotten about; a Canon EOS 35mm camera and, most concerning, the only set of keys to the house and car of a professor friend whose home I was sitting for a few weeks while he and his family where visiting New York and New England.

We went for a surf after the police left. Small waves; the swell hadn’t really lived up to expectations. Still, it was classic Elands, but I was out of sorts, worried, thinking about how I would get into the house, the car, replace a camera that was very precious to me—I had saved up for it for months while living in London many years ago.

Back from the water, Constable Gqoli and his team were waiting for us. They had a suspect already, a  delinquent-looking youth they produced in handcuffs from the back of the van. “He wants to have a word with you,” Constable Gqoli told me. He had many words, this guy. Most of them had to do with me being persuaded to pay him money because he might just happen to know who had stolen my stuff. I played a notoriously South African trick favored by politicians and the media: disingenuousness. Nobody knows what it actually means, or even if that’s a real word, but if you want to have your way with the body politic in South African you must be “disingenuous,” or accuse your enemies of it.

“Huh?” I said to our suspect. “What? I don’t understand. What are you saying?” I turned to the lady constable, “What’s your experience of this sort of situation?” I asked, appealing perhaps to the feminine qualities of empathy and intuition necessary to defuse this tense situation. The prevailing masculine solution seemed obvious: torture this grovelling little captive until he spilled the beans. There was no immediate answer. In the end it seems my crime fighters had no precedent for this one, so I suggested that no money was going to change hands, and that if our informant had anything to say that had a bearing on the case, he would be best advised to offer it free of charge before I laid a charge against him for being an accessory to the crime. Constable Gqoli had heard enough by then, he banged the perp back into the cage of the van and he nodded to me, “I think we’re gonna get your stuff back. We’ll come around this afternoon and let you know any progress.”

I was left with my doubts. I entertained ideas about housebreaking and hot-wiring a Honda because I didn’t want to pay for emergency locksmiths on a weekend. Come what may then, I thought, but I took another piece of Pat’s advice and went back up the hill, around the hotel to the liquor store across the lot from the police station, and described  the three investigators to the old man behind the counter. I asked whether he might know what they liked to drink: A couple of quarts of milk stout, lager, vodka-based fizzy drink—it turned out he knew exactly. I offered the drinks and they were received when Constable Gqoli paid his return visit in the afternoon. Whether my bribe (I considered it a gesture of thanks) went any way to greasing the wheels of justice, I couldn’t tell, but Constable Gqoli said he was almost certain then of getting my things back to me.