Desperately Satisfied: How Tug and Freighter Waves Made Seattle My Surf Town 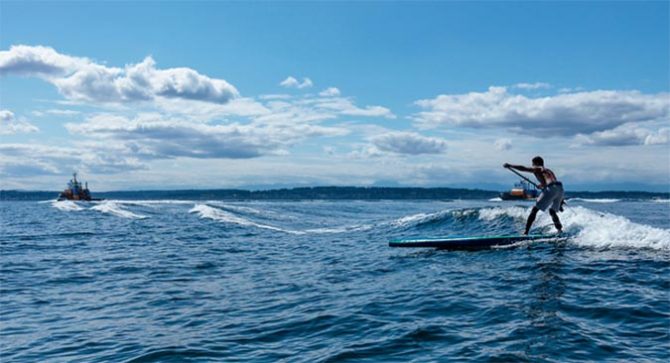 You gotta be open minded with your craft choice at this lineup. Photo: Patrick Bennett

Whenever I used to ask my neighbor Chuck–a salt-crusted vet–to join me on our local freighter waves he always mumbled in indifference, ‘those are just fabled waves.’ Granted, I’m a little open-minded when it comes to what we surf here in Seattle. I want to get more waves. Chuck chose instead to drive 3-5 hours (one way, if there’s traffic) to the Washington coast for fickle conditions.

I always think of Chuck when I’m dropping into clean, chest-high peelers 200 yards offshore and five minutes from our homes in Seattle. Chuck later moved out of the area, never once experiencing near perfection on of all places, Puget Sound, 132 miles from the open ocean. The discovery of these weird waves has kind of made Seattle more of a surf town for me. Scratched the itch, if you will, without having to fight the freeway.

Around 2002, my buddy Todd and I were sea kayaking on Seattle’s Shilshole Bay when we noticed a set jacking up to coastal size near the shore. We were curious, dropping in for a ride. And it worked, despite our confusion: ocean swell from the Strait of Juan de Fuca couldn’t get in this far south near Seattle, could it?

Then it hit us: large, fast-moving container ships going over 17 knots in the shipping lane three miles away were throwing waves. They start as swell in deep water, later jacking up into steeper faces when they reach our sandbar, a hazard to unwary summer boaters who don’t watch their depth finders. 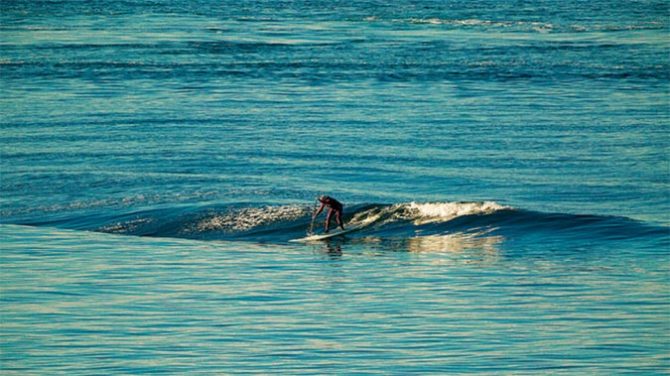 We spent the rest of that summer and following seasons looking north to the horizon for incoming freighters. In the early 2000s, there weren’t any apps available to follow ship movement. But we started noticing certain boats were on a schedule , like the Tote Lines North Star, which plows south weekly through Puget Sound at 23 knots, even on an opposing ebb tide or south wind.

In time, apps like Marine Traffic charting boats on the AIS system made our lives easier. And like any locals at any break, we were able to determine the best tides for ideal results. Once we dialed it in, we began surfing there several times a week, spring through fall.

Sometimes on an opposing tide, waves would break in deep water a half-mile offshore. We would paddle out and surf those all the way in. A few times, those waves would build up to head high or overhead (no, I’m serious). My buddy Todd once pile drove his 18-foot sea kayak vertically into the beach after a large wave closed out. Unlike a traditional break, we didn’t have a history of how a set would break so things can go from flat (as in lake-like) and glassy conditions to surf in a matter of seconds. We take the waves and deal with the lump that develops in front of us.

When SUP appeared in the region around 2006, I began to spend more time surfing upright. This also allowed me to easier spot the indicator waves going off down the way which alerted us of incoming sets.

Plenty of good surfers have turned their nose skyward at our spot, dissmissing it as they cuss us under their breath walking away, never to be seen again. And they’re right: some days we’ll score chest-high sets for 45 minutes from one boat. The next, during the same tide and a similarly-sized boat, it’s waist high or less. But on epic days, I’ve caught minute-long rides with my 14-foot downwind board from far offshore (I swear).

Two summers ago Evan Leong of Oahu visited me to cover the phenomenon for his blog. After the boat passed, I pointed out the indicator going off on West Point 1.8-miles away. “They’ll reach us in a few minutes,” I said. He looked out at flat water. “There’s no way waves are coming,” he said, cynically. Within a minute, steep unbroken peelers appeared in front of us. His video shows his stoke, covering me with his GoPro while we surfed side-by-side on a minute ride to shore.

For open-minded regulars, our motley line-up is a mixture of surf and race SUPs, longboards, an Oahu native on a bodyboard, and an occasional surf kayak. Sometimes passing paddlers get caught in the breaking waves unknowingly as they move towards West Point.

Around the same time we found freighter waves, one day, Todd and I were sitting about a quarter mile offshore in our kayaks when a large, two-story yellow tug passed. Behind it was an impressive breaking boat wake stretching across the bay. As it neared us, our jaws dropped as waves were stacked one after another with a period of about 2 seconds. Unlike a freighter wave that will eventually end at the beach, these never ended.

But the tugs did have a weekly schedule. We found that since the tug waves were not dependent on the tides we could catch them anytime a boat was passing and anywhere on the bay. As we began to know the tugs better, we found the best craft for longer rides were on long, fast watercraft such as sea kayaks, surf skis, OC’s and 14-foot SUPs. The waves were steep but unlike an ocean wave, lacked power. Similar to wind swell, they require more paddling to drop in and maintain glide. 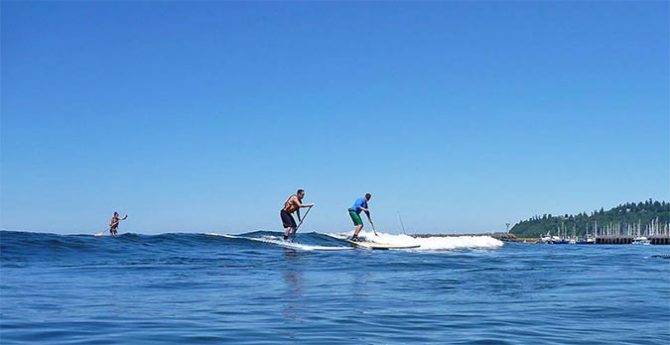 Why so serious? The Elks Club is this way. Photo: Jon Kwon

Funny how people love to help out surfers. We soon realized the tug captains were giving us waves. If we positioned ourselves in the right spot on the right day, the boats would put the gas on as they passed. One day, a tug pulled up next to us, the captain yelled out “how big of a wave do you want?” Surprised, we jokingly said, “six-foot, maybe seven?” He circled around, put the gas on and came towards us throwing off a huge set that sent us screaming to the West Point Lighthouse a half-mile away. When I took a local SUP racer out for his first tug experience, he said the tug coming at him full bore shot his heart rate device up (ha, newbie).

In time, we got to know the tug captains at our local Elks Club, conveniently located on the beach where we launch. They told us that surfing their wakes was just the first hour of a weekly scheduled two-week trip to Alaska (so we were breaking up the monotony for them). By the time we’re sitting on the Elks deck at sunset with a beer, the tugs are headed north with a fully-loaded barge.

Yes, freighters and tugs have definitely upped my wave count living in the heart of Seattle. And I admittedly have an open mind to different craft from SUPs to sea kayaks to surfboards and am willing to experiment on these novelty waves. So on that note, foil anyone?