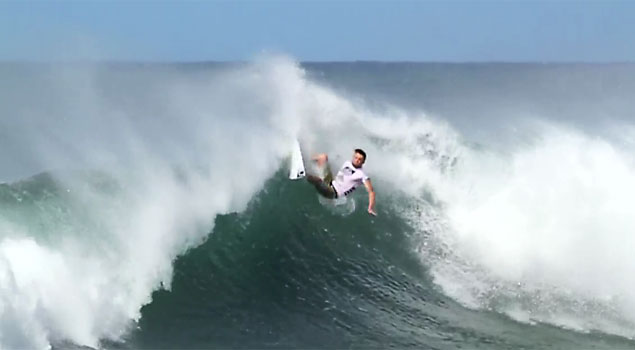 A frame grab from Dane Reynolds' layback heard round the world at the Reef Hawaiian Pro at Haleiwa.

“Did you see Dane’s heat?” might be the most frequently posed question the surf parking lots and line ups around the world these days. This is a staggering proposition considering the fact that Dane Reynolds (27) is no longer competing on the WCT – and only surfs in events that either pique his interest or are sponsor obligations.

Dane’s Round 96 Heat 10 at the 2012 Reef Hawaiian Pro is further evidence that Reynolds might be the most radical surfer in the history of our sport. In the 4- to 6-foot powerful rights at Hale’iwa, Dane completed a maneuver (drop wallet Larry layback) that left commentator Shane Dorian stunned: “I’m going to go out and say that that’s pretty much one of the most gnarliest turns that I’ve ever seen in my life.” Shane added, “Honestly, that was one of the best turns I’ve ever seen in my life. That was…..next level.”

When the wave score came in as a 7.33, it left the commentators puzzled, with Rob Machado simply stating, “That’s a travesty!” and Shane quipping, “I don’t know if the judges are watching the same thing that I was, or maybe I am the biggest Dane Reynolds groupie that there is…..which would really be saying something.” These honest and candid comments seemed to place the webcasting duo on a bit of an uncomfortable hot seat, as a quick and uncustomary response was issued from the contest organizers, explaining the judge’s ruling for the wave score.

Fortunately, it appears that the surfing world is focusing more on the maneuver that Dane completed (already being touted as “the layback heard round the world”) and less on the judge’s evaluation of this monumental moment in surfing. It is refreshing for fans of surfing to see Dane apply his patented reckless abandon to competition, as opposed to the more successful, safe and calculated approach to competitive surfing that seems to have permeated the ASP WCT landscape. Dane’s insouciant demeanor toward the format of today’s professional competitive surfing is as risky and intriguing as his surfing, and it will be interesting to see what plays out in the future.

Check out more action at the Reef Hawaiian Pro.