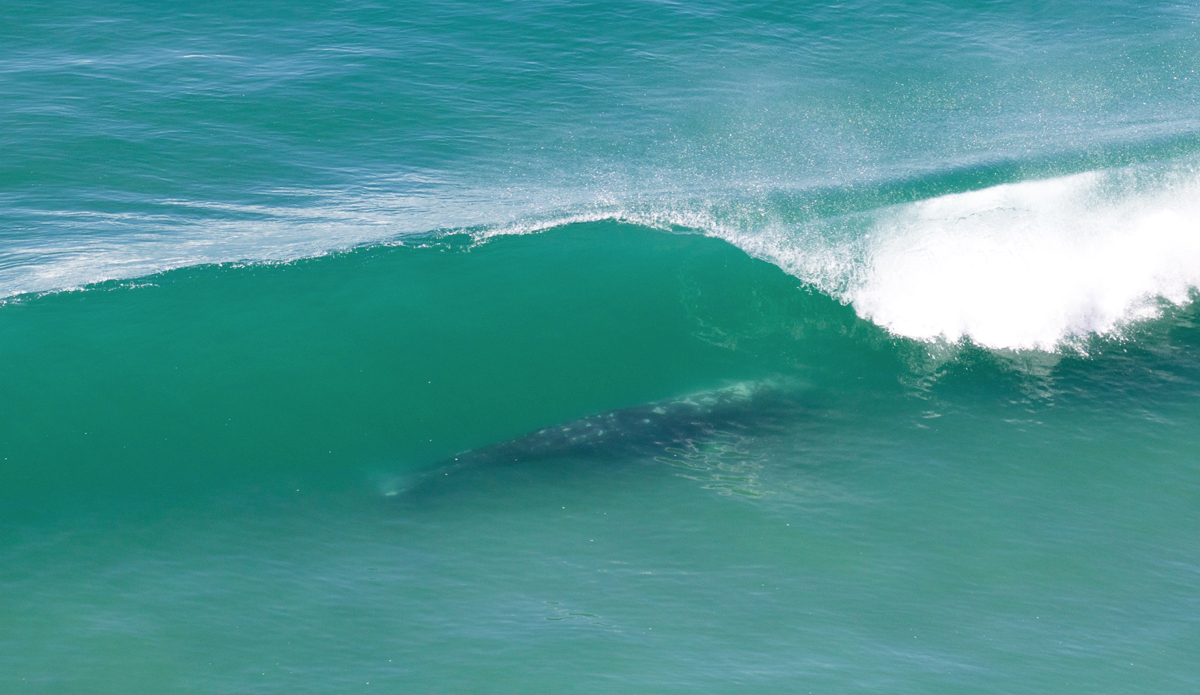 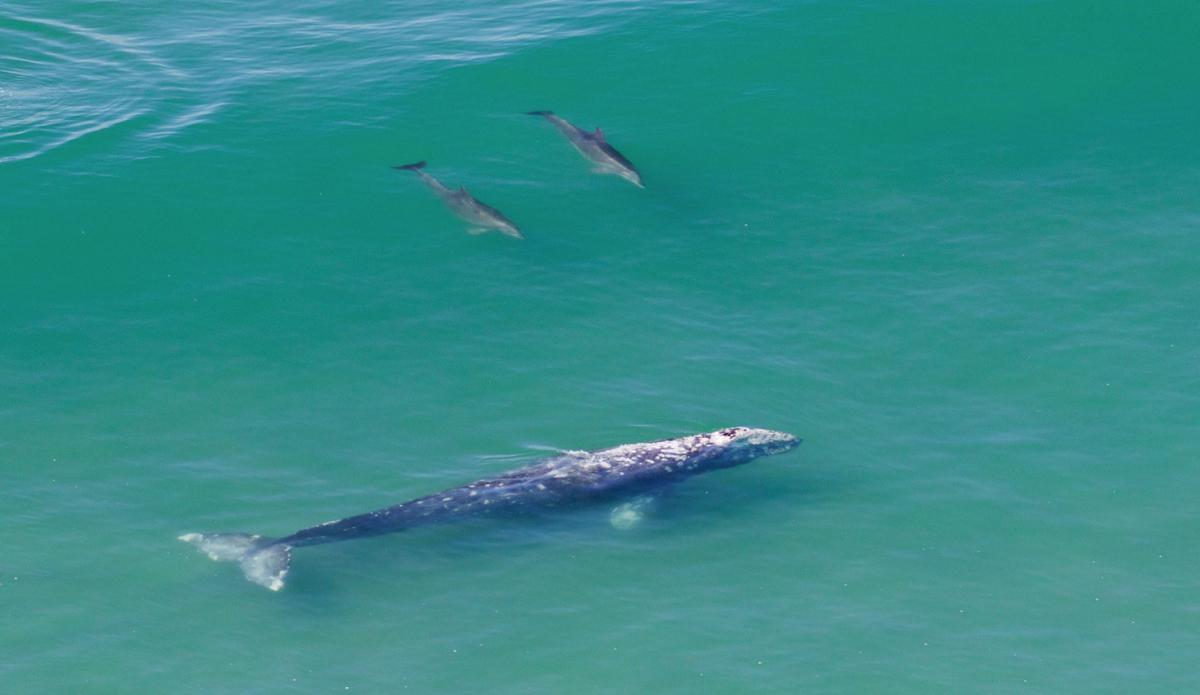 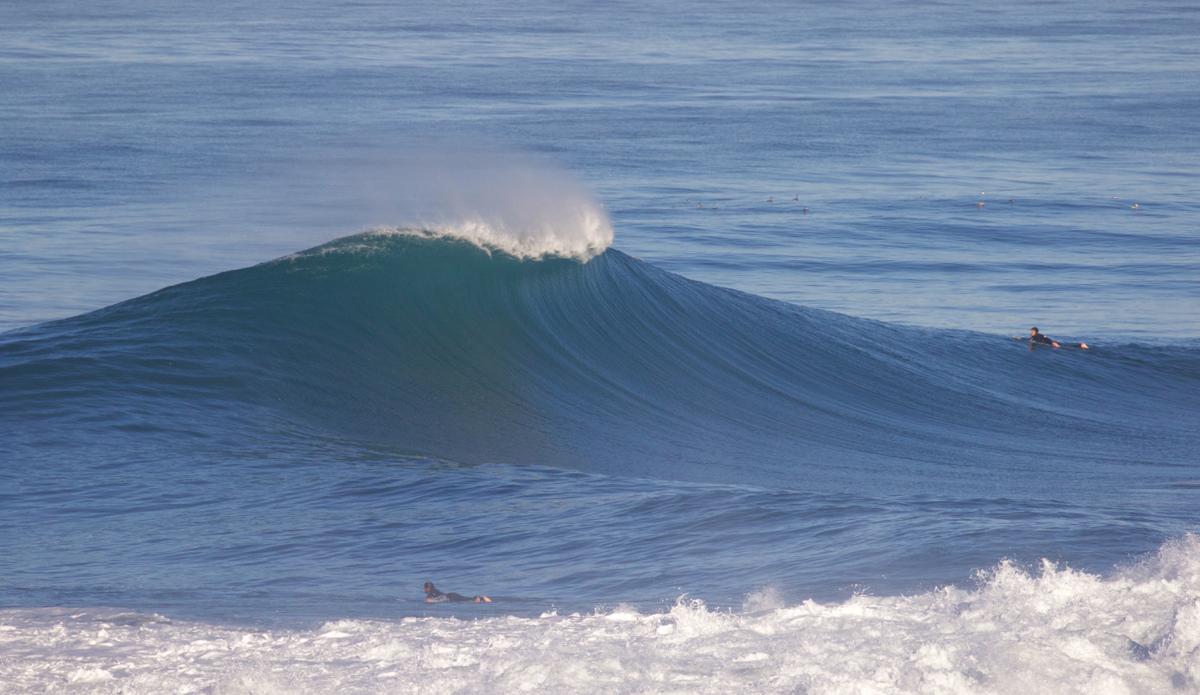 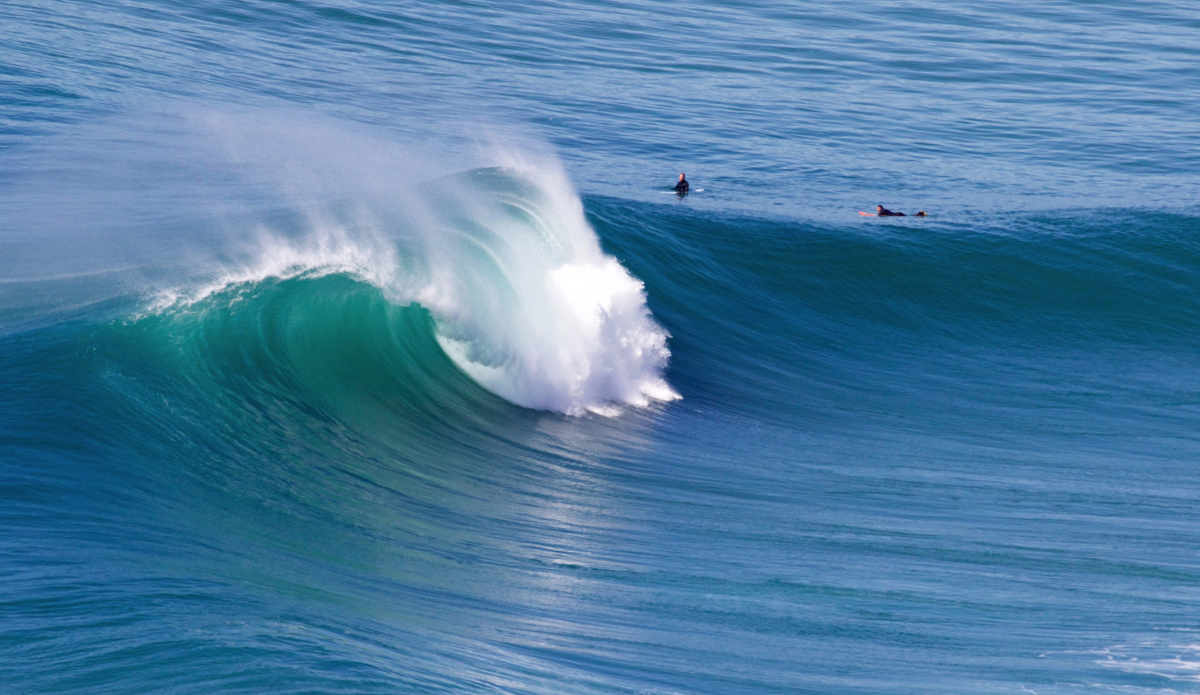 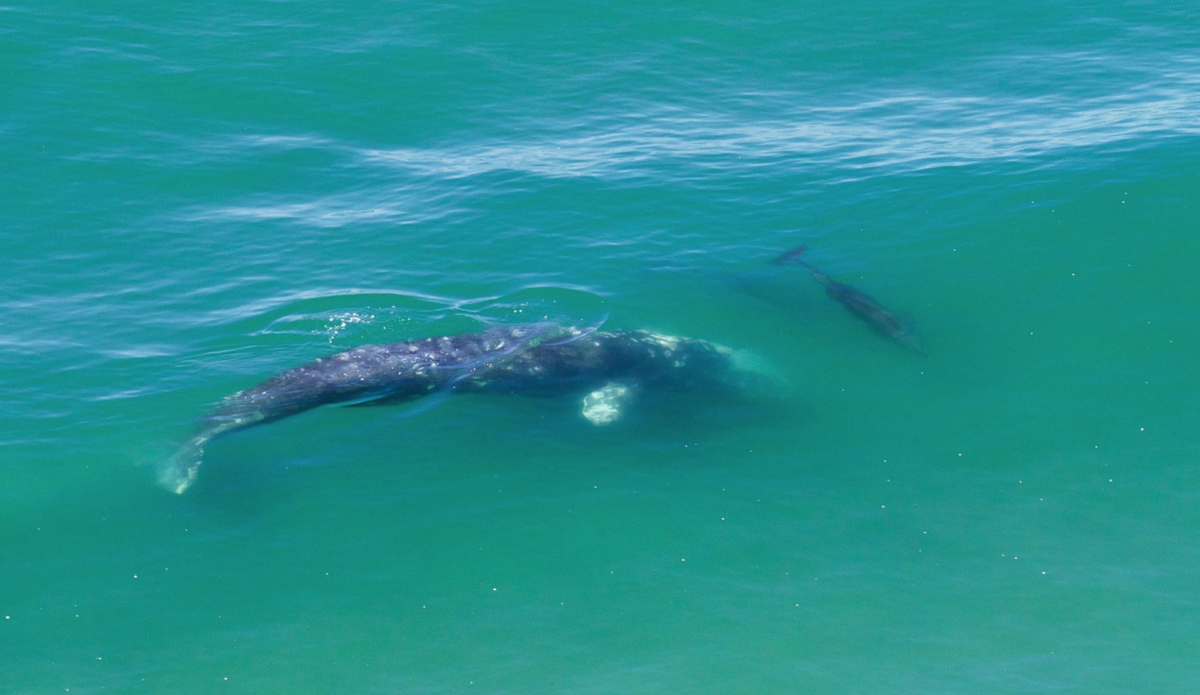 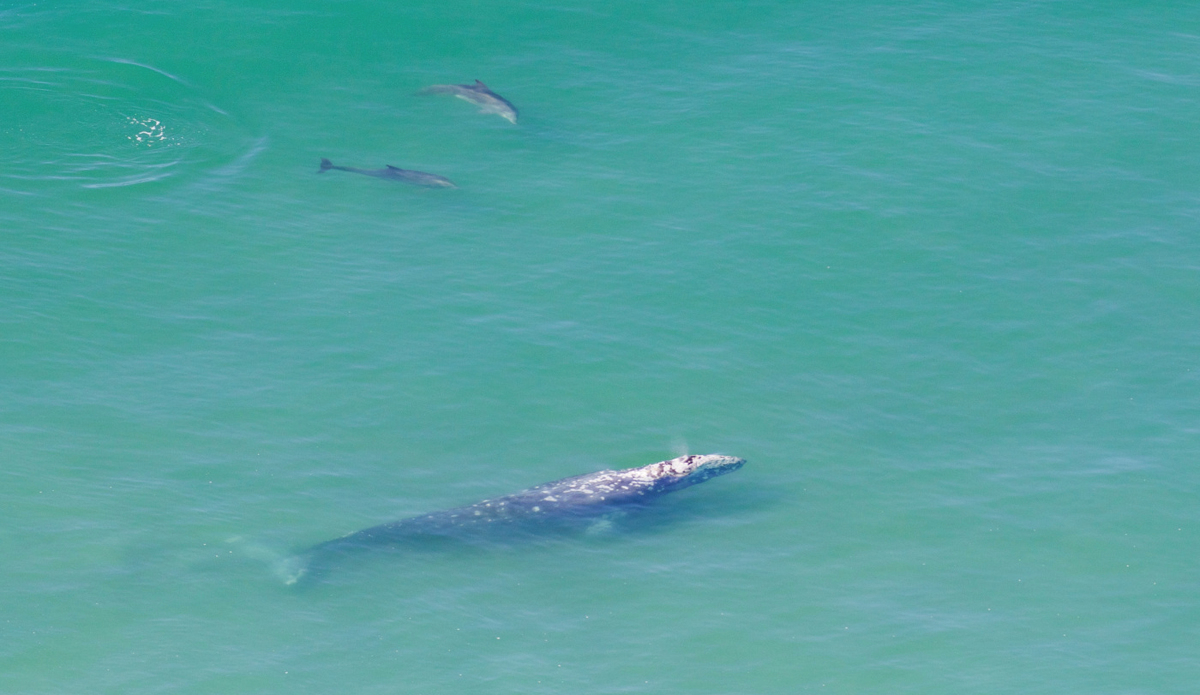 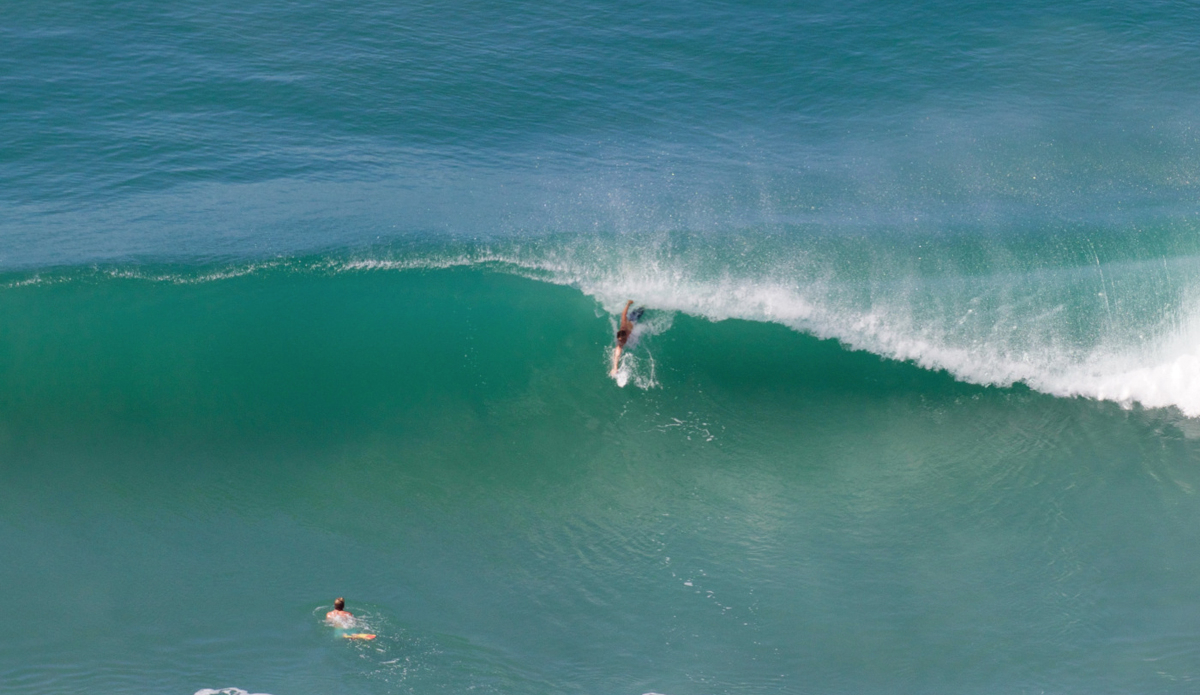 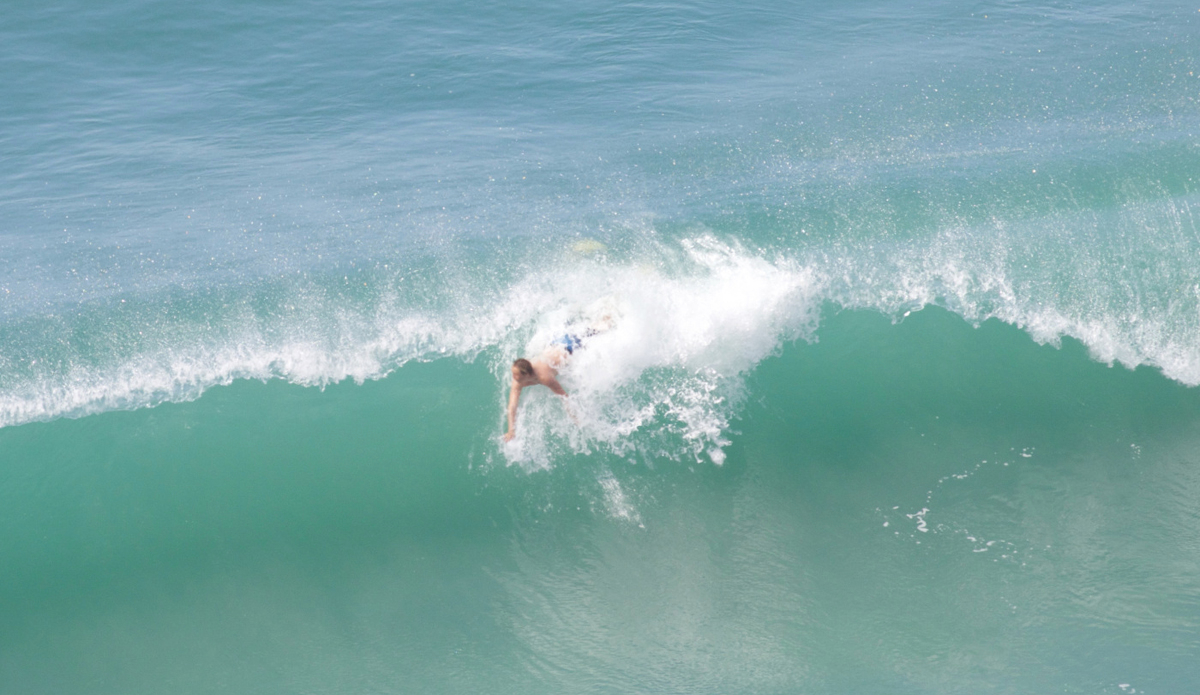 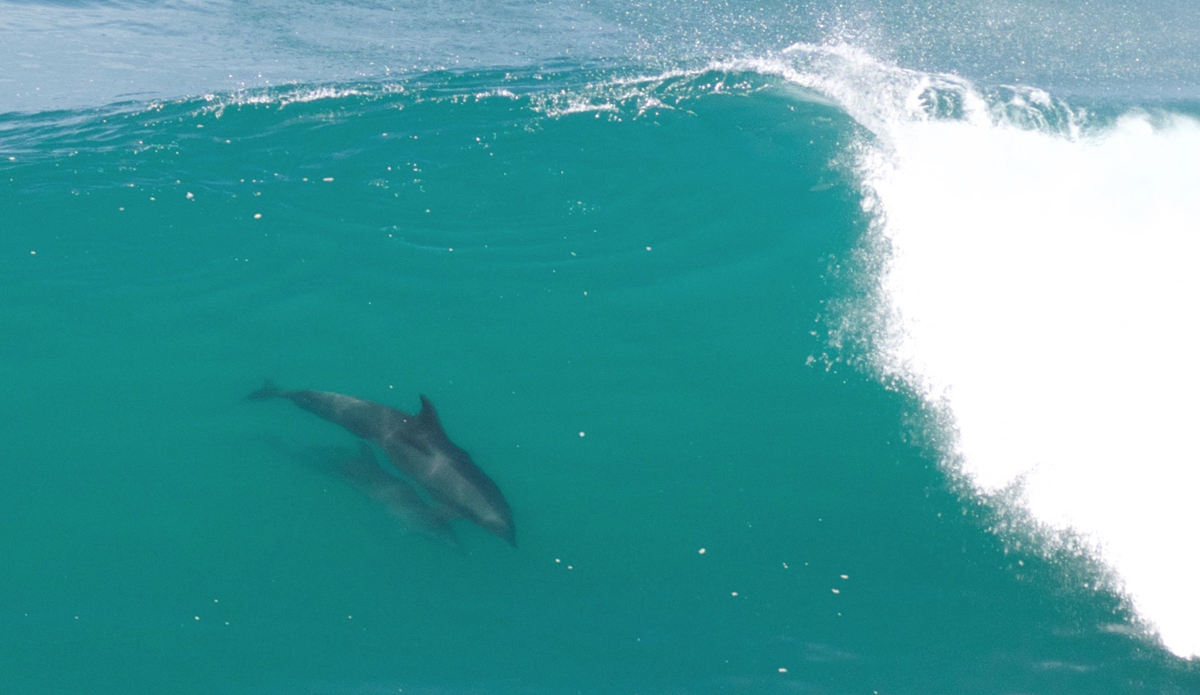 The surf was huge and perfect. With local San Diego buoys reading eight feet at 18 seconds, the swell came directly from the west. Double overhead+ peaks moved at a velocity rarely experienced. Windless, glassy conditions persisted throughout the morning. Two months of extraordinarily solid surf removed most sand from the beach and left behind piles of rock. With high tide smashing head-high whitewater off the cliff, entry and exit are hectic. After catching several dreamy waves, I went to the top of the cliff to photograph the epic surf from my favorite vantage point. Peaks continuously bent and warped out of the Canyon, thundering in the neon blue-green water. Two bodysurfers began riding waves, sans wetsuits in the 80°F, 11 a.m. sun. Trading barrels, they lasted about 45 minutes. Then, a few locals showed up.

A pod of eight dolphins suddenly appeared from the south. They rode waves together and kicked out the back. Shortly after, I spotted a larger dark spot in the water. I first thought it was the dolphins in a tight bunch, but as it came closer, I realized it was a gray whale cruising abnormally close to shore. The dolphins swam circles around the large cetacean, almost as if they were graciously escorting him back to whale territory.

Gray whales migrate annually from summer feeding grounds east of Alaska to winter nursing grounds along the Baja Peninsula. Spouts and flukes are frequently witnessed along the Southern California coast, but much less common so close to shore. The 13,000-mile round trip migration is believed to be the longest of any mammal.

This particular specimen was a male who was getting an early start on the long swim north to Alaska. He continued his cruise along the shoreline, dolphins buzzing around. I must admit, though, I was concerned. I’ve spotted plenty of whales and some of them just beyond the breakers. But this whale was now 40 feet from shore in roughly 5 feet of water. An unusual and uncomfortable place for a 4- foot, 30-ton marine mammal. I was prepared to call SeaWorld Animal Rescue and help them push the creature back into the sea.

At his closest approach, a wave broke across the whale’s back and he disappeared in the white water. I nervously watched, thinking he would roll up on the beach anytime. Finally, I caught a glimpse of him as he was headed back out to sea. He was probably exhilarated with his first taste of breaking wave energy. He was headed straight towards the pack of surfers sitting at one of the peaks. I watched intently through my camera lens to witness the surfers shock if the whale surfaced in the middle of the lineup. But I never saw the whale again and haven’t heard of a beached whale. So, I’ll just assume that the whale had been feeling the pulses of El Niño wave energy passing by for weeks and wanted a closer look.