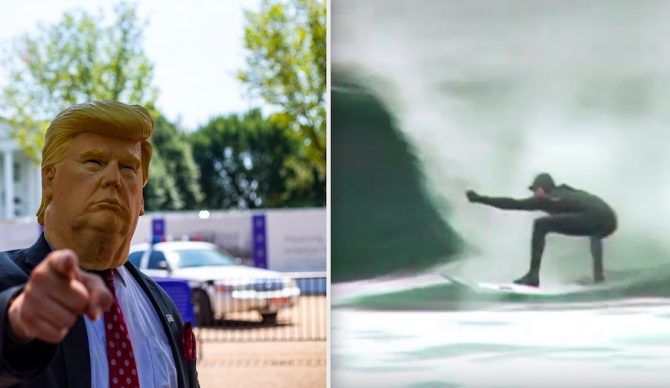 “I was ripping out there.” “You are fake news.” Photo: Left, Darren Halstead, right, screenshot.

On Sunday, The New York Times released the first of what will be multiple reports detailing their findings from analyzing almost two decades of Donald Trump’s tax returns. The Spark Notes version is that Trump, the human equivalent of a rabid weasel trapped inside a septic tank, evaded paying taxes through claiming on his tax returns that his properties were floundering. He is currently staring down the barrel of hundreds of millions of dollars in debt because of a portfolio rife with failed endeavors. However, this did not deter him from proclaiming his business prowess to the public at every given opportunity (perhaps motivated, as the NYT report states, to build his brand back up to escape said debt).

I have seen this façade before. Trump’s actions were nothing new or revolutionary. In fact, he cribbed his posturing straight from the everyday surfer’s playbook. Exaggerating stories to appear more proficient than we surfers really are is Surf Talk 101. An average surfer’s public estimations of their own talents are not all that different from Trump’s proclamation of financial adroitness.

Surfers love to lie. We throw smoke screens, keep secret spots, and hang false shark sighting notices, spreading our own version of fake news at an alarming rate to conceal our true actions. Our agenda is to always remain disguised.

And for good reason – once we get thrust into the public eye and pressed for details about our latest session or trip, embellishment and fabrication come pouring out. Every surf tale ever told is a PR spin to frame the storyteller as a mythical waterman overcoming tremendous odds to perform the unbelievable. When asked how the waves were on a recent trip, it’s not uncommon for a three-foot wave to become head high, a small change of direction to transform into a sick carve, and buckets of spray to be the result of a belabored top turn. It is the average surfer’s modus operandi to spin yarns like a pro while surfing no better than a delightfully-mediocre weekend warrior.

And then we have Trump, a man who has literally written off his many failures, electing to fashion himself the persona of a big wave business wizard. He never hesitates to tell the world that his monetary maneuvers always throw buckets of cash or that he gets deeply pitted in a cocoon of money. And you should see the numbers on his air reverses – “they’re very impressive.”

Meanwhile, his real finances are strapped to cinder blocks, rapidly sinking towards the bottom of the Atlantic. But that doesn’t stop this self-promoting PR machine, crafting an image of the most adept real estate tycoon who seals only the sweetest deals despite having few profitable ventures in his portfolio. This is no different than if I looked you dead in the eye and claimed to have a solid backhand snap based on successfully performing only three of them over a two-decade span (please note I will absolutely tell you this).

We surfers are a rickety house of cards. Our egos tell us we are always mighty, always powerful, and always great. It doesn’t help that our mind’s eye is a more than willing accomplice to these assumptions. We refuse to address any of our own issues in a meaningful way because that goes against the character we have constructed for ourselves. We are the ones that are supposed to have nature figured out, after all. It’s much easier to pile on more debt – more surfboards, more gear, more fabricated stories, more stuff to superficially prove we are successful at this sport – than it is to accept our shortcomings, address the true structural source of our aquatic woes, and work to be better surfers.

All of that being said, if anyone knows a good tax professional that can write off all of my surfing failures next tax season, I’m all ears.