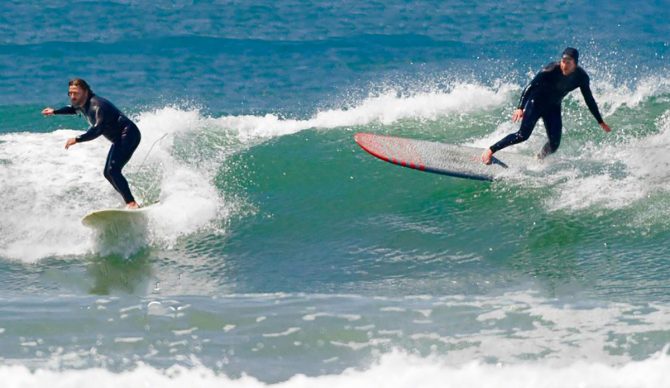 The only photo that surfaced from a day at the beach with my buddy. Convenient. Photo: Courtesy of Pat Pemberton

A few years ago, my friend Joe started calling me “Von Burner,” a nickname I refuse to accept for multiple reasons:
I’m supposed to be the one who doles out nicknames – and BroJoe knows this.

This was surf slander, which threatened my good standing in the lineups.

As proof that I “burn” people in the lineup, Joe submitted the above photo, supposedly taken by a “friend,” but it has all the markings of another Russian misinformation campaign (I’m on to you, Putin). But let’s just assume, for the sake of argument, that this photo is real.

Is this so wrong?

I mean, for one thing, Joe is a goofy foot, who prefers to take lefts. And, as you can see here, I’ve kindly facilitated his desires by lining up to his right.

That’s right. I made sacrifices. And what do I get?

Oh, and also? I like how the one photo of me from that day just happened to catch me supposedly burning someone. Very convenient.

Somehow the camera was never around whenever Joe burned me. But that’s how the Kremlin works: First, you’re burning someone in the lineup, then you’re having lunch with Hillary Clinton in a pizza parlor.

Of course, I’m being a bit facetious. And before you haters, curmudgeons, and wanna-be hardcores troll the comment sections, let me say that I don’t go around burning people in the lineup.

I’ll have to say, though, the whole “Don’t Drop In” thing gets a little out of hand in the surf media. John Robison’s Surfing Illustrated is a fun and thorough intro for surfing, but in its surfing etiquette section, he writes, “Dropping in on another surfer is the equivalent of drunk driving through a red light in a school zone.”

Seriously. It says that. I looked for a footnote, saying, “Haha. Just joking!” but there was none.

In a piece about dropping in on others surfers, a fine reporter for the Orange County Register wrote, “Mess up and you can expect to get dirty looks, splashed, yelled at, shunned from the surf spot, or your board broken. In extreme cases — in an earlier generation — a surfer might even wind up on the wrong end of a beating.”

Maybe I have unrealistic expectations for civilized society, but this seems a smidge extreme. Of the many reasons someone might deserve a boot party, causing a guy to miss one wave hardly qualifies.

If you feel the need to batter someone because of surfing, Punchy, I suggest paying someone to help you deal with your daddy issues.

But maybe we’ve set unrealistic expectations. After all, one informal rule holds that there’s one person per wave. If you apply that to a busy place like Malibu, by my calculations, you can expect to catch roughly two waves every six and a half hours.

With a rule like that, one can see where frustrations would mount.

Of course, I’m spoiled. Because where I live, we don’t really have big crowds, and, hence, fewer problems with dropping in (for anyone considering crowding our lineups, I should add, there are no jobs here, the waves suck, and the ocean is swarming with sharks). So any minor slight might seem like a major faux pas.

Especially when magnified by Russian kooks.