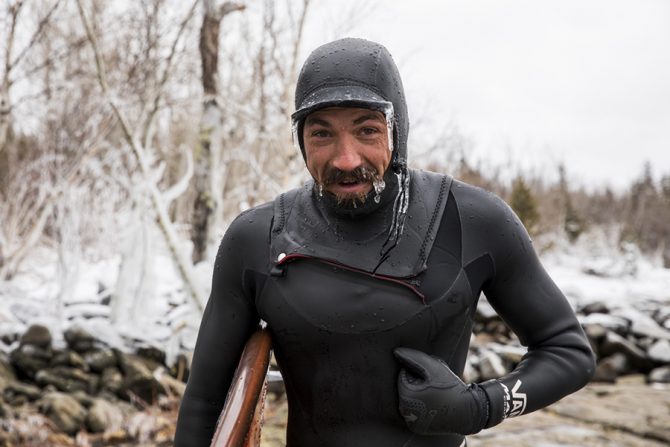 With his work on lake, river or ocean, Graves has created a Weird Waves community that spans the globe. Photo: Mike Killion

In a sense, Dylan Graves’ entire surfing life is built on an ethos of exploration. Seeing what’s around the next corner, in the next cove, around the next bend. Graves’ parents ran a surf shop in Florida in the 1970s and 1980s and used any downtime they had to travel the Caribbean looking for surf. Eventually, Puerto Rico spoke to them. They sold their shop and moved their young boys to the island so they could learn Spanish, and have plenty of space to roam. And explore. “Growing up having that surf exploration instilled in us at a young age, it just made me love surfing so much,” he told me. “How could you not? It’s pretty much the coolest thing anyone can do. I’m so blessed to have grown up like that.”

Dylan surfed strange, hidden waves all over the island. So it’s no surprise his surfing career has taken the turn it has: a life spent chasing waves way, way off the beaten path. And surfing them really well.  I caught up with him to talk about the second season of Weird Waves and life outside the lineup.

So, the obvious question is how did you get into riding these lesser-known surf spots?

Novelty waves have always been something I was psyched on. They’re all around Puerto Rico, where I grew up so (chasing them was) instilled in me at a young age and it seemed to snowball from there. As social media became more of a thing, it seemed to grow. I’d throw a clip up of something like that and it seemed like people were really interested. I felt like that was what I was most interested in, too. I’d go on trips and surf normal waves so much, that was the dream, what surfing (as an industry) was pushing towards. But surfing novelty waves – it seems weird to call them ‘weird waves’ now – was always something I loved about surfing. It was kind of like escaping normal surf society, going where no one was looking. So it kind of feels like a very personal thing for me.

You’re pretty much making a career out of it.

I hope so. I guess – I’m gonna be surfing weird or novelty waves my whole life. I’ll try to do whatever I can with Vans for as long as I can. When that’s done, I’ll be surfing em’ by myself. It just feels like something I’m always gonna be doing, something I’ve always done, and where I wanna be in the surf world.

What’s been the craziest trip so far?

The craziest was the Great Lakes. We were about to do a tour of different river waves in Bend then to Boise, the first ‘Weird Waves’ tour. Two days before we were leaving I get a call from (Great Lakes local) Burton Hathaway that it was going off. I dropped what I was doing and we caught this crazy swell. The Great Lakes is harder to get and it’s really more ocean-like.

I guess you could say the most unique was the Severn tidal bore (in England). I really enjoyed that. It was a side of surfing I’d never seen before. They’ve all been unique in their own ways. Really, each has been about reconnecting, or just connecting with a part of surfing I didn’t know anything about. Surfing is something I’ve done my whole life. It’s something I thought I knew. But I’ve found I know absolutely nothing about surfing as a whole. These people are experts in areas of surfing I didn’t even know existed.

There seems to be a bit more joy in those out-of-the-way surf communities, eh?

That’s kind of what lead me down this path. Why I like these novelty waves so much: no one’s looking at them. You can go and have this experience that’s your own. There’s no opinion from anyone else, you’re free of all that bullshit or eggy-ness or some local sitting on a spot for 20 years who’s going to suppress your good time. It’s definitely the fresh side of it and it’s really nice. There are no rules. It almost seems the opposite of surfing in the ocean. People are pumped to share, especially now. (On the coast) everyone wants to keep spots under wraps, I get it, surfing in Puerto Rico can be eggy, too. But I think of what surfing in the 1970s would be like when Gerry Lopez was riding Pipe with no one around. It’s not like Pipeline (on the Lochsa River) in Idaho is on the same caliber but I got to surf Pipe with no one around, Pipe Idaho. It’s been cool, the further I dive into the world of weirdness, the more I don’t want to go back to normal surfing.

You’re in San Clemente now. Seems like a world away from Puerto Rico.

I moved out two summers ago. I miss PR so much, family in general. It’s hard not having family support. My wife is finishing her degree down here so it’s worked out by default. I would have just stayed in PR if it was up to me. But she had opportunity down here and I was like, “okay, as your husband, I want to support you,” so we’re out here now. It’s been rad. Because of our move indirectly, it’s a huge reason why Weird Waves became a thing. Actually, I don’t think it would have happened if not for me being around the industry, pushing for it. It’s interesting thinking back. Someone was looking out for me.

Have any urge to compete anymore?

I don’t at all. I started contest surfing to hang with friends. As competition got more and more serious, I started competing against friends, competing against my brother. I never gave a shit who was better. I don’t want to be better I just want to surf with my friends. I’d rather just go have fun. It just grossed me out. It wasn’t what I was surfing for. But I never knew if it was possible to be a freesurfer. But once I figured it out I thought it was the coolest thing you could possibly do, if you were able to. I always pushed for that. I used competition to get me there until I figured out how I was going to be able to just freesurf. I’m definitely glad and very fortunate I was able to find this niche and have it work out. It’s such a tough world to even get paid for surfing, and nowadays it’s really challenging to pull off, especially if you’re not crushing people’s faces in comps. It’s hard to remain relevant. How do you quantify a freesurfing athlete next to a competitive surfer? I guess with social it’s easier. I’ve just been extremely fortunate to have found a brand like Vans that gets it on so many levels.

What’s up with this next season of Weird Waves?

Season 2, yep, we’re trying to make it a sustainable thing and not burn ourselves out and do it for an extended period. I want to put time and energy into a thought-out piece that means something every time we kick one out. I’m getting more involved on the production side. It’s been cool, and therapeutic really. I’m just learning so much from doing these videos. I’m becoming a better person – in a way it’s school for me. My wife and I trip out, she’s in school and I’m in my own ‘weird’ school learning editing stuff everyday. I’m watching more YouTube tutorials on Premier and Photoshop than I ever thought I would.

That’s really the goal for me with weird waves: what can we get away with and still call it a surf trip. I’ve been trying to get to Alaska for years. I want to learn about these places that not many people knew had waves, and learn about full-on scenes nobody would think were there and get to places I’ve never been before. I’m lucky enough to make money as a surfer, why wouldn’t I get to places I’ve never been before? This isn’t gonna last forever.