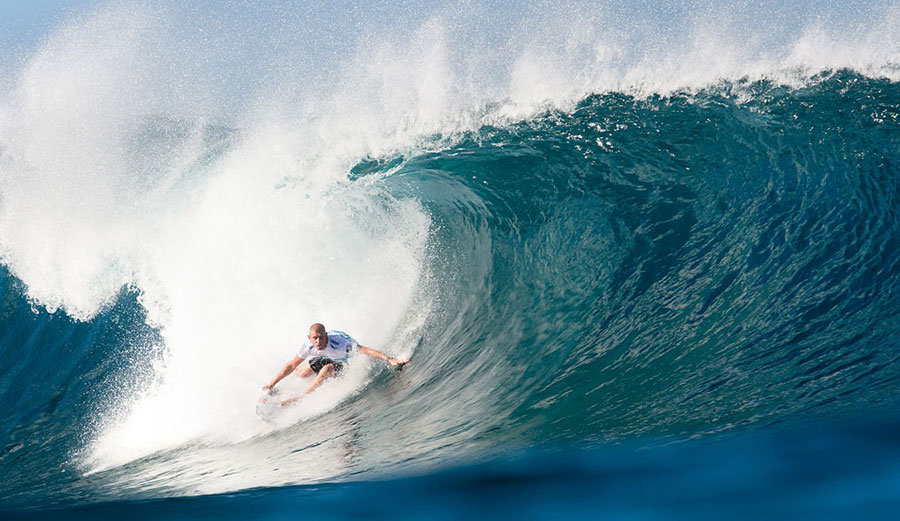 Mick Fanning knows how important it is for his body to be strong and flexible. Photo: WSL/Cestari

Movement. It’s dynamic flexibility, the capacity to be mobile through joints, to move with ease and control. It’s pretty relevant to this whole surfing thing we take part in. It’s not going to suddenly make you rip, but it’s a big key to the puzzle of staying in the water!

Do you move well? Are your hips locked up? How about that stiff spine and computer posture? You reckon these issues help you in the water? I would venture to say they don’t… and not only are they not helpful, they’re probably setting you up for some issues down the road.

Do some honest self assessment. Do you move through your joints as well as you should, to keep surfing the way you want? If you don’t do you do anything about it?

I’ve been in Indonesia the last few weeks, and not to call anyone out, but there’s a lot of fellas in the 30+ category with the slowest popups and turtle posture while paddling. Because of it, they’re limiting their surfing because of bodily limitation, and missing a lot of waves too. I’m in that 30+ category, so I have a right to be slightly harsh. The same situation can be seen in pretty much any lineup anywhere in the world. Age is simply not an excuse. It’s not difficult to correct this stuff, and it’s not difficult to keep yourself fit and capable.

The key to longevity in the surf–and in life– is to make sure you’re a movement-capable human being. Surfing well, surfing pain free, and surfing way past your fifties requires you to be an efficient human, which means being a human that can move well. Unfortunately, that is no longer the norm. Do something about it. This will give you some tools, so take some responsibility and improve your efficiency and movement.

Hips, ankles, neck, shoulders, and spine: they’re all a critical part of three-dimensional movement. Think of the rotation required in a full wrap-around turn. If one of those joints isn’t moving optimally, it forces torque into other joints, which usually ends up not feeling too good. Adequate flexibility isn’t suddenly going to make you slash through turns like Mick Fanning, but it is going to take the brakes off your movement and give you the room to improve your actual skill of surfing.

Back to the 30+ yr. old fellas. Most of us don’t surf full time (unfortunately). We have other jobs; ones that are generally lacking in movement. This incredible thing we’re given, the human body, adapts to what it does most often. Do you sit a lot? The hips will chronically tighten. Do your shoulders roll forward, mouth dropped wide open, with your head slinking further forward while staring at a screen? The body will adapt to that position, and muscles will change their length to that commonly held posture. The joints of the upper body, or the hips, will no longer hold ideal alignment. This changes the mechanics of the joint, meaning its potential for movement has changed, and not for the better. Then mix in a few hours of surfing, which is huge amounts of three-dimensional movement thrown into a body that has adapted to sitting at a desk. Is it really a surprise that you ache?

Generally speaking–and keep in mind that it’s tough to make generalization about the human body–there are certain joints that should move quite a lot, and others that shouldn’t move as much. Ankles, hips, thoracic spine, and the shoulder are some of the joints that should be quite mobile. Mobile meaning that you have full control and access to that joint’s range of motion. 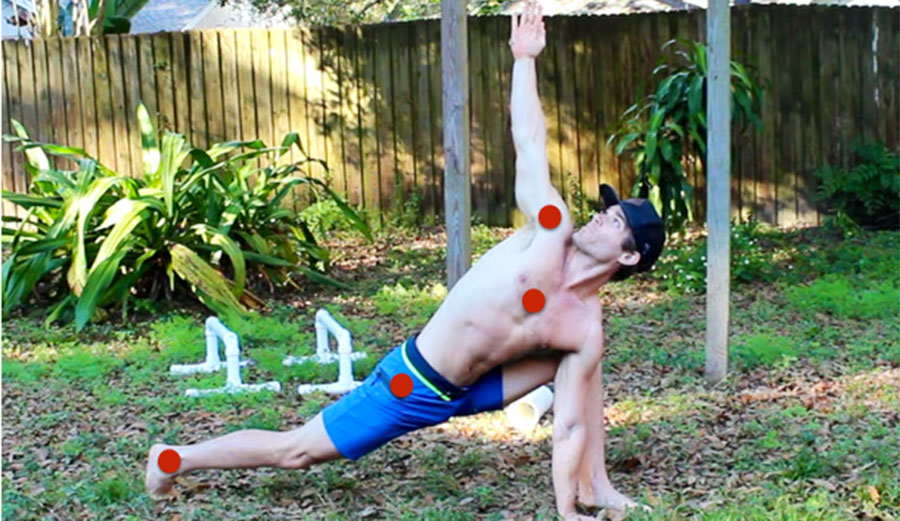 Are your red dot spots as flexible as they should be?

Dynamic surf flexibility: that’s a clickbait term for moving well. When you watch the warmup video below, don’t just watch it. Actually move through it. Knowledge is nothing without application… zen! Do NOT move through pain. Do not hold your breath. Proceed slowly, with awareness of how you move, considering what feels stiff, and where you feel limitations.

How’d you go with it? All good? If so, use it as a warmup, before you surf, and before you train.

What you’re doing with this sequence is utilizing your mobility. You’re not just idly sitting in a stretched position, you’re actively using that range of motion. What good is flexibility if you can’t use it or be strong in that position? It’s useless.

If you’re having some issues, and these drills have highlighted some limitations, then let this be a wake up call. Invest some time in getting yourself moving again, and moving well. It’s your body, and you get one good go with it, so get the most out of it. Most people treat their car, or their unnecessarily expensive purse better than they treat their body. I honestly find that disgusting.

If you’re finding you have issues, there are a couple of things you can do. Generally–again there’s that “generally” with regard to the human body–you need to regress those stretches to more of an isolated one. Instead of doing that dynamic spiderman stretch (the one of me with the red dots), you’d do some release or stretching to the chest (pec major, pec minor, anterior deltoid), perhaps some thoracic spine mobilizations, or specifically stretch the quadriceps and rectus-femoris (the muscles on the front of the thigh) to allow for a better hip position. Some of this more isolated stretching or release work could free up that particular joint so that you’ve got access to more range of motion.

The goal is to get dynamic, and progress into these full body integrative movements, and yoga-esque stretches, but the key is to get there efficiently. Recall how I mentioned earlier in this article that you need to be able to breathe, chill, and relax into these stretching positions. If you’re too tight, and fighting to be in that position, then you need to scale back. Tissue release and isolated stretching if necessary. Then go back into the dynamic or full body position. See if there’s been some positive change. It’s simple!

Check this deep squat with rotation pic from the video. Having some trouble achieving this position? Don’t feel bad, as most people aren’t that great at it (although they should be!). Some folks are restricted due to orthopedic reasons, meaning their bones literally won’t let them get into that bottom position. For most, however, it’s because you no longer have the capacity to move well. While this deep squat position isn’t going to suddenly make you shred, it does show you’ve got the joint range of motion to get into, and out of, low compressed hip positions, crouching barrel stances, and the low squat position as you get your legs underneath you in a pop up. It’s pretty relevant! So what’s limiting you?

It could be tight hamstrings. Maybe the ankle isn’t moving well because the gastrocnemius and soleus muscles (calves) are too tight. Maybe the muscles on the front of the shoulder are restricting you from getting sufficient rotation and arm elevation. It could be all of these things, or just one, but they’re all changeable with some directed effort.

The point of all of this is to highlight the NEED for you to be able to move, not only to simply surf better, but remain active in life. It doesn’t suddenly require a complete change of life direction, but it does require some consistent effort. Ten minutes to a half hour several times per week can make some drastic changes over the span of several months. It’s consistency over complexity.

Get your body moving well. It will help you in your surfing endeavors, and in life.

For more detailed insight into flexibility, recovery, and moving better, check out Stretchesforsurfers.com and Surfstrengthcoach.com.