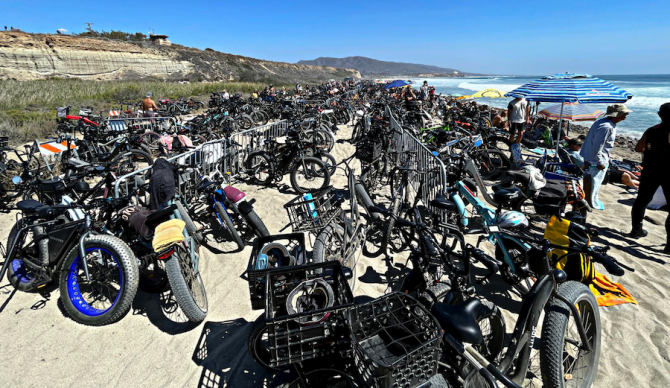 The WSL Finals saw thousands of e-bikes parked at the event, as spectators turned to electric power. Photo: @thestokelife

To say that San Clemente, Calif. has a thing for e-bikes is putting it mildly. The above photo was snapped during the 2021 WSL Finals at Lower Trestles when seemingly the entire city of San Clemente rolled up to the event in style, leaving a line of parked electric bikes that stretched for hundreds of yards.

In other words, as is often the case with crowds in Southern California’s high-performance Mecca, things got out of hand. A recent report in the OC Register details how the bikes have become pervasive. The City of San Clemente has reportedly had enough of the speedy rides that can reach speeds of up to 30 mph. More specifically, residents and the city council have had enough of careless riders, often youngsters who don’t even have their licenses yet, and the chaos they created by weaving through and speeding past pedestrians and non-electric cyclists on the narrow trails leading to San Clemente’s beaches. Trestles, being outside of the city of San Clemente in San Diego County, is not a part of the ban.

As of last Wednesday, the San Clemente City Council made good on its promise to deal with the problem, enacting a ban that prohibits e-bikes from the beaches and beach trails within the city limits after a year of deliberation. The decision was met with mixed responses. Susan Ambrose, a speaker at the city council meeting on Wednesday, supported the decision, considering it a matter of public safety. “Nobody anticipated it would be so popular in San Clemente, in particular on the beach trail,” she said. “I think the community would feel much safer without electric bikes on the coastal trail.”

Other speakers were not so hot on the idea. One woman talked about her experiences riding e-bikes on the coastal trails for the past decade. “I just hope we can come up with some sort of compromise,” she said, while acknowledging that a problem exists, particularly with younger riders.

“It comes down to bad behavior,” Councilman Gene James said. “In most cases, there’s a lack of parenting going on.”

Mission Hospital in nearby Mission Viejo has been keeping statistics on e-bike injuries, which show that in 2020 there were six e-bike injuries involving children, compared to the first 10 months of 2021 when there were 38. It remains to be seen if this ban will have any impact on those numbers.

Editor’s Note: A previous version of this article stated that e-bikes would be banned from Trestles. The San Clemente e-bike ban will not extend to Trestles, as the area is outside of San Clemente. Trestles is in San Diego County and is managed by the California State Parks.