Apparently, a major category in a mealworm’s food pyramid is EPS foam. Who knew? Photo: Courtesy of Ryan Harris

Boom. Earth Technologies, the South Bay-based surfboard and SUP production company that’s been at the forefront of building greener boards, just changed the game. In a press release Wednesday, Earth Technologies announced that their factory will soon become the first zero-waste board building facility in the world, thanks in part to tiny mealworms. But let’s back up.

For the last ten years, Earth Technologies, helmed by Ryan Harris, has been at the center of building the greenest surfboards and SUPs possible. When we caught up with Ryan a little over a year ago, he explained his drive to get his hands on the most eco-friendly materials out there. Not one to shy away from uphill battles, Ryan was using bio-resin back when it would cure a weird yellow color, has fought hard against unfounded theories that epoxy doesn’t perform as well as poly, and has always sought to minimize waste in the process. 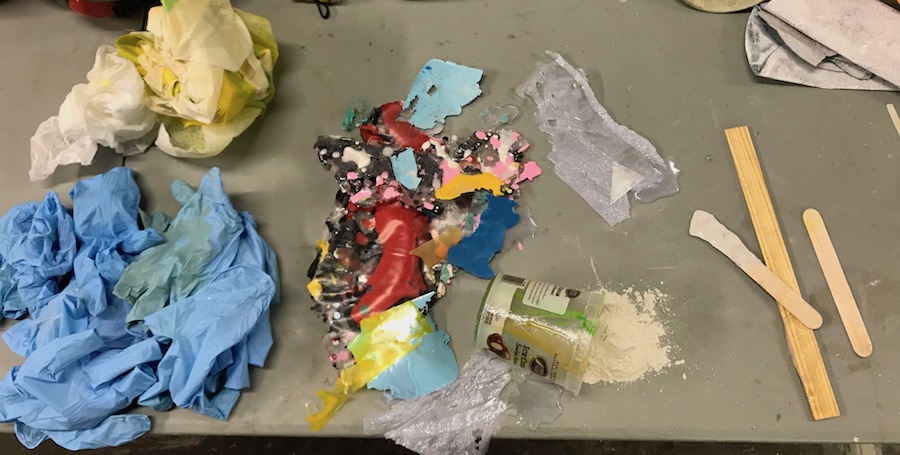 Gloves, stir sticks, used cups. In most factories this stuff typically goes to the trash and eventually in a landfill. Photo: Harris

But making surfboards is really messy, says Ryan. “I felt like it was kind of a catch-22 to preach all this stuff about sustainability when we are putting out, you know, mountains of trash into the trash bin outside and it ends up in the landfill.” Ryan’s found solutions for larger chunks of EPS foam that are bi-products of the shaping process through Marko Foam and Sustainable Surf’s Waste to Waves program, along with other ways to reduce, reuse, and recycle. But for some of the tiniest forms of waste, namely foam dust, sawdust, and the like, there was no way around that waste stream ending in a landfill.

Here’s what a typical trash bin looks like at most factories in the industry. Photo: Harris

Four or five months ago, though, Ryan found a solution to his waste problem in the form of mealworms.

“I met this guy named Eddie [Garcia], and he runs The Living Earth Systems… and he sends me this video of these freaking meal worms eating styrofoam and eating wood. And I was like, ‘This is a joke. There’s no way,'” says Ryan. Eddie has a facility on Molokai and recently opened another in Fallbrook, California. “To keep it short and sweet, he’s got a network of these worms that eat styrofoam and wood and poop out organic soil. And so that is the solution for all of our shaping dust.”

In addition to recycling and upcycling processes Earth Technologies is already employing, and the addition of the mealworms to the equation, part of the company’s commitment to zero-waste also includes a board recycling and deposit program, and a vacuum infusion system.

As part of the board recycling and deposit program, the Earth Technologies factory will become a collection center for broken or retired epoxy boards. “The outer shell gets stripped and shredded, then we upcycle the foam into new shapes or handplanes,” explains the press release. “The customer recycling the board will get an in-store credit. A portion of this in-store credit will go to key non-profits we support.”

Simple organization and categorized waste bins where all sanding room waste is stored until it’s ready to be densified through the machines. Photo: Harris

The vacuum infusion system is all about turning waste into usable, durable products. “All shop trash/waste gets sorted/categorized then processed by two machines: an industrial shredder and particle reducer,” explains the release. “Every bit of production waste from gloves, stir sticks, excess resin on floors, to brushes and squeegees will go through this process. Through the Vacuum Infusion Process we will turn our densified waste into usable products ranging from key chains, and coasters to fins and handplanes.”

“A year ago I didn’t think this was possible,” says a very excited Ryan over the phone. “It’s the dream.”