Eight Weeks: “This Revelation Was The Gift Of Cancer” 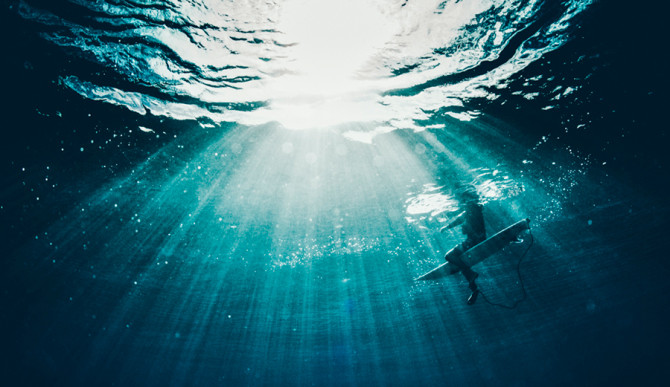 My right testicle survived exactly 41 years. It was removed, along with a seven-centimeter malignant tumor, on my birthday. The surgeon insisted I stay landlocked for at least eight weeks because surfing could rip my internal stitches and ruin his handiwork. I respected his opinion and appreciated his efforts, but land was becoming overwhelming: tests and scans, appointments and pathology reports, constant trouser-dropping for latex-gloved strangers. I felt thankful for the technology and caring staff keeping me alive, but I needed a counterbalance to the soulless, antiseptic medical system. I needed the messy and feral and pure. I needed to surf.

I spent the first week after surgery in an enfeebled haze. Convalescence did not suit me. Seven more weeks of landlocked recovery seemed unbearable. In the grand scheme, eight weeks without surf is nothing. Most people have endured far longer for countless reasons. But with an uncertain future, I needed a connection to the divine. Never a churchgoing man, the ocean was my connection.

Two weeks passed. I felt better and started to plan for my post-op paddle out. My wife swiftly quashed the scheme. She repeated the surgeon’s dire warnings about the stitches and handiwork. She was a stickler for protocol and, though I was loathe to admit it, absolutely right. Risking my recovery for a few waves was unwise. I retreated to my tests, appointments, and recuperation.

By the third week, I felt physically fine but spiritually depleted. Western medicine excels at treating the body but drains the soul with its sterile gadgetry, drugs, and reductionism. The ocean beckoned, just a simple Pacific soak, a transcendence of my specimen-like existence. I argued with my wife. She insisted I wait eight weeks. I relented.

I entered the fourth week surly and paranoid as I arrived at the doctor’s office to learn my prognosis. Per usual, I was weighed, measured, and fondled. But the news was good, the scans and tests clear. The future remained uncertain but I was alive for now. My left testicle performed admirably, the veritable toast of the doctor’s office.

I could wait no longer. The eight-week convalescence was for fools and hypochondriacs, I decided, and wondered darkly if it was just a plot by lawyers and bureaucrats to avoid liability. Didn’t matter. I was going surfing, and nothing would stop me. My wife didn’t even argue. I threw my gear into the car and drove to my favorite reef. The waves were small and choppy but the lineup was empty. Good enough. I suited up and paddled out.

The saltwater washed away the grime of the past month. As I floated in the Pacific with the circling otters and gliding pelicans, a revelation hit me: I could accept my uncertain future because a deeper certainty pervaded the silence, an energy humming beneath the surface. It could not be reduced to malignant cells or lab results. It was eternal, perfect. I just needed to tap into it. This revelation was the gift of cancer.

A set feathered on the horizon. I turned and paddled for the first wave. It jacked over the reef as I dropped in and cruised down the line, riding the energy home.