Editor’s Note: This feature is supported by our friends at Mizu.

A trip to Salina Cruz has become surfing’s version of a milk run.  I’ve been doing it every year since 2006 without a scratch.  The violent Narco caricature of Mexico always felt like a world apart from the peaceful Oaxacan surf experience.

It went something like this: see a swell, check the winds, book a flight.  A friendly guide picked you up in a suburban at the cute thatched roof airport in Huatulco. He drove you to a surf camp, let you surf wherever you wanted, and kept you fed and hydrated the whole time. You scored waves, ate a few tacos, sank a couple of Modelos, and went home happy. Simple. Easy.

Until 2020. Because nothing is simple or easy in 2020 anywhere in the world.  That’s especially true deep in Mainland Mexico during a once-in-a-century pandemic.  Flying down there in August with zero intel for the conditions on the ground seemed risky at best.  But a two-month lockdown in California followed by a five-week, mid-summer flat spell were desperate times that called for desperate measures. So I booked a flight with four aspiring teenage pro surfers –Taro Watanabe, Max Beach, Patrick O’Connor, and Ian Gottron – who wanted me to film them riding better waves than they could get at home.

Direct flights from Tijuana to Huatulco were only $120 round trip.  To get there these days you can get dropped off at the CBX on the U.S. side and simply stroll across a bridge into the Tijuana airport.

When we rolled our board bags on carts to the other side, we found a terminal packed with other surfers.  Our flight was full, too. Everyone on board dutifully wore masks until the attendants came by with drinks and snacks and then all bets were off.  The worst-case scenario came into my mind: catch COVID on this jet, get all of our group sick and then realize that no one has a chance of getting a flight back home for weeks.

Luckily, that didn’t happen. When we arrived in Huatulco, our guide, Chemel Guzman, explained to us the new rules. A majority of the beaches in the area were closed to foreigners because they’re located near villages of mostly indigenous people. The centuries-long history of the white man bringing disease and death isn’t something they’ve forgotten.  If we wanted to surf, we’d need to hire a boat and we were forbidden from setting foot onshore.

So early the next morning we chartered a fishing panga from the Huatulco harbor and motored an hour down the coast to Barra de la Cruz.   A Barra local paddled up to our boat right away and wanted cash for us to be able to surf there. We paid $70 for the group, which seemed reasonable until another guy and then another showed up and also wanted money.  The village, in the best of times, lives at a subsistence level and these local surfers, having been cut off from the world since March, looked gaunt and hungry.

We ventured south to Salina Cruz the next day by car. The kids were lured by reports of thumping beach breaks that are offshore in the predominant north winds. We tried to check a spot thirty minutes east of town but ran into a series of makeshift roadblocks with sticks and stones scattered on the highway.  Apparently the citizens of two rival hamlets had gone to war overnight with machetes over land rights and twenty people were dead.

We drove out early in the morning to Punta Conejo, the spiritual home of surfing in Salina Cruz.

The wind was bad for Conejo, but we were happy to be at a spot that felt safe.  A few other trucks of surfers showed up. Conejo was open and easy to access. It didn’t stay that way. Within an hour, the municipal police arrived and told us that this beach was now closed.  These cops gave the bad news in a friendly way. They didn’t have guns and they didn’t rush us to leave.  They seemed to enjoy their assignment for the day. They hung out on the sand, took pictures, and chatted.

So we left Conejo and did something we shouldn’t have done. We drove to nearby Punta Chivo. Chivo had been open as well, but probably wouldn’t be for long. Chemel spoke to the owner of a small restaurant who said we were free to surf there.

We surfed sloppy, onshore waves at Chivo on a rising swell over the next four hours without incident. Just as we were about to leave, a group of men appeared way down the beach.  Looking at them through the telephoto lens, we saw they were federal soldiers toting AK-47s and were coming for us.

This obviously wasn’t good. They likely knew we had been at Conejo in the morning and had defied the police’s order to stay off the beaches. Unlike the friendly unarmed municipal cops we’d met earlier, these federales weren’t here for a day at the beach. They told Chemel to drive back to the small restaurant we were at earlier where their comandante was waiting to have a word with him.

I’ve known Chemel for 11 years. His nickname is Pantera Negra, Black Panther. He’s the kind of tough guy you want on your side anywhere. I have never seen him nervous. Now his hands were shaking and his voice had a slight tremble as we quietly talked on the drive back to the restaurant.

I had a car full of teenagers who knew something was wrong, but I didn’t want anyone to panic. Chemel asked us for a wad of cash.  He put $150 worth of bills in one hand and put another stack of notes in the center console of his SUV.

We were greeted by another squad of armed men and their comandante. The guy had greyish stubble on his face and a cold and dead quality to his eyes.  He looked straight out of central casting for a murderous boss on a cartel-themed show.  “Tranquilo,” relax, he said to Chemel in a cocky way that felt like a threat.  I didn’t think the $300 or whatever we’d scraped together would be enough for him.

I took the kids into the restaurant while Chemel haggled with the commander. For ten long minutes, the kids and I just stared at each other across a plastic table in the sand and didn’t say much. 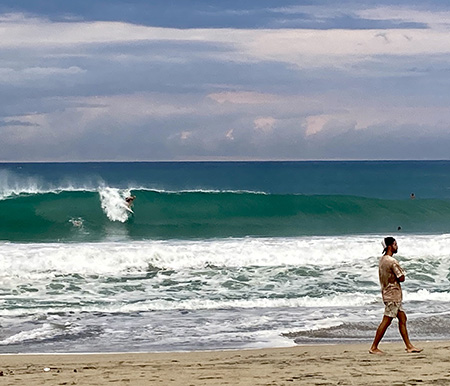 Max Beach and the comfort of Puerto. Photo: JT

Chemel appeared. The feds left. Chemel told us he got us out it if without having to resort to the second stash of cash in the truck. Now we were free to go. We could even come back and surf there again the next day if we wanted. Total cost, $150 USD.  It would have been worse if this had happened in the U.S.  Surfers in Malibu got fined $1,000 and locked up for the crime of riding waves during the L.A. beach quarantine in April.

Chemel said the comandante’s first offer was $1,500 and it took a while to talk him down. “Did you think you were going to jail?” I asked him.

“I thought all of us were going to jail,” he said.

One more thing, “Does that guy work for the cartel?” I asked.

We’d had enough drama in Salina Cruz so we drove back to Huatulco and booked a boat the next morning for Barra. Except for the cash-starved locals, our previous trip there had gone smoothly.

This one did not. The port was closed in the morning because a Category 4 hurricane was due to move past the coastline during the day.  Around 10 a.m., though, the skies were clear and we figured the storm had already moved out to sea. The port was back open.

We drove out to Barra in the panga and it was empty. No locals, no other boats. Waves were six-foot, clean, and super fun.  Everything was just as we’d hoped until a few bands of fluffy clouds rolled in over the mountains.  Sunny skies quickly turned dark with rain. I watched as Ian Gottron did a perfect off the lip with a giant flash of lightning behind him. It looked like an airbrushed psychedelic painting on a 1970s van.

I paddled into shore, hoping the storm would pass. I waited for an hour. It just got worse. The lighting was relentless. White bolts shot down directly above our heads. The thunder was so loud it shook the beach like an earthquake.

In the midst of it all, Max Beach’s dad, Bruce, showed up on another panga, having come here straight from the airport. He paddled out into the maelstrom and traded waves with Max and Ian.

Chemel and Pedro, the panga’s captain, called us back to the boat. The rope line to the anchor had gotten stuck in the propellor. Waves from the wind and rising swell were flooding the vessel. I had visions of us abandoning the boat and spending the night onshore.

I padded to the panga through the surf as fast as I could with lightning flashing all around me. Somehow Chemel and Pedro got the engine fixed and steered us through the teeth of the storm.  Just before dark, we made it to port.

We drove two hours north and hunkered down for the rest of the trip in and around, Puerto Escondido, a classic Mexican surf town and expat haven.  All things considered, life there felt as if it was approaching normal. The swells marched in like they always do across a deep water trench. They reared up and roared across the Playa Zicatela stretch – sun-kissed and smooth in the cool offshore winds each morning.

Seeing the tubes roll in like clockwork felt like a kind of tonic, a cure not for the virus, but for the confusion, disarray, and economic despair that have been left everywhere in its wake.  In a world turned upside down, as long as the waves are still with us, the surfers will find a way to be there too.

When not much is what it used to be, you hold onto anything that is and try not to let go.