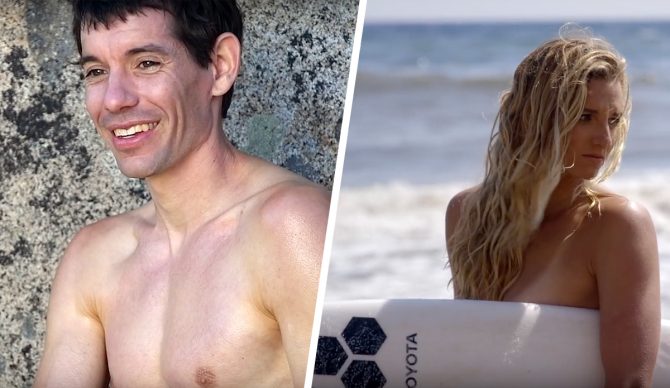 Ten years ago, ESPN the Magazine issued its first-ever edition of The Body Issue, paying tribute to the human body as an athlete’s tool. Laird Hamilton was featured in that first issue in a segment that showed his cracked heel — a nod to the beating some bodies take in athletics.

Since that inaugural issue, the magazine has become an annual event in and of itself. It’s featured Kelly Slater and Stephanie Gilmore, Laird and wife Gabrielle Reece, Elena Hight, Gretchen Bleiler, and a handful of other outdoor athletes through the years. This year, Alex Honnold and Lakey Peterson were two such featured personalities.

“As a child I was so shy that I couldn’t speak in class,” Honnold tells ESPN. “The idea of being able to basically stand nude in front of a bunch of folks and kind of hang out is sort of like, huh, it’s like a rite of passage.”

True to its formula, the issue uses the platform for athletes to share how their specific body allows them to do what they do. But Peterson also used the conversation and her appearance in the magazine to talk about empowering younger women and promoting positive body images.

“I’ve always felt it’s a great opportunity to show younger girls and just women, in general, that your body is beautiful no matter what it looks like. And you don’t need to be ashamed of it. It can be used in very strong and powerful ways.”

Editor’s Note: You can find more from ESPN the Magazine’s The Body Issue online here.